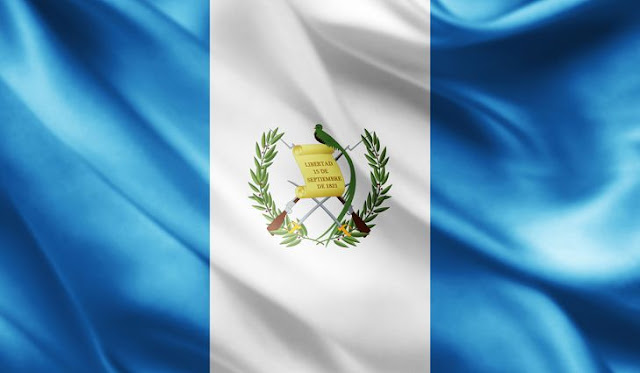 Guatemala has a total of 33 volcanoes.

The official name of the country is the Republic of Guatemala.

The literacy rate in Guatemala is 71%.

The tallest pre-Columbian structure in the Americas is Temple IV in Tikal. It stands at 212 feet.

The longest river in Guatemala is the Motagua River.

Guatemala has a tropical climate, being hot and humid in the lowlands and cool in the highlands.

As of 1 January 2016, the population of Guatemala was estimated to be 16,514,591 people. It is the most populous state in Central America.

Guatemala City, locally known as Guatemala or Guate, is the capital and largest city of the Republic of Guatemala, and the most populous in Central America. Fast paced and vibrant, it is a interesting blend of old and new and possesses a distinct Latin charm.

Guatemala is mountainous, except for the south coastal area and the vast northern lowlands of Petén department.

Volcán Tajumulco is a large stratovolcano. It is the highest mountain in the country and in Central America at 4,220 meters (13,845 feet) above sea level.

In Tikal, Guatemala there are approximately 3000 Mayan buildings that date between 600 BC and AD 900.

Guatemala is home to 37 volcanoes, 3 of them still active.

The name Guatemala is an Aztec word meaning “land of trees” and forests still cover a third of the country’s surface area.

During the Guatemalan Civil War approximately 200,000 people died and half a million were displaced from their homes.

Motagua River is the Longest River in Guatemala with 486 kilometers in length.

Guatemala’s coastline along the Pacific Ocean and the Caribbean Sea totals 400 kilometers (249 miles).

Belize used to be a part of Guatemala but was given to Britain. Britain had promised some highways in return but they were never built.

Its Pacific Coast is lined with hundreds of beaches, all of which are covered with black volcanic sand; while narrow stretch of Caribbean coast is covered with white sand.

The other half of Guatemalans are called Ladinos, who are of Spanish-Mayan ancestry.

There are over 30 national parks and preserved areas located in Guatemala.

The Tikal National Park, created in 1956, is the oldest and most famous of Guatemala’s national parks. It encompasses 575 square kilometers (222 square miles) of jungle and thousands of ruined structures. It was declared a UNESCO World Heritage Site in 1979.

The Guatemalan currency is the Quetzal, and the U.S. dollar is also used.

The first chocolate bar was invented by the Mayans in Guatemala.

Quiriguá is an ancient Maya archaeological site in the department of Izabal in south-eastern Guatemala. It contain the largest stelae ever discovered in the Mayan world and many other outstanding monuments. It was declared a UNESCO World Heritage Site in 1981.

Approximately half of the Guatemalans living today are descendants of the ancient Mayans.

The population of Guatemala today is more than 14 million people. Guatemala is the second-most populated country in both South and Central America.

Antigua Guatemala is a city in the central highlands of Guatemala famous for its well-preserved Spanish Baroque-influenced architecture as well as a number of ruins of colonial churches. It served as the capital of the Kingdom of Guatemala. It was declared a UNESCO World Heritage Site in 1979.

Lake Atitlán is a lake in the Guatemalan Highlands of the Sierra Madre mountain range. It as been described by many as the most beautiful lake in the world. Lake Atitlán sits at 1,538 meters (5046 feet) above sea level and is surrounded by hills and volcanoes.

Evidence of human life in the Guatemalan region dates back to 12,000 BC.

Pacaya is an active complex volcano and rises to an elevation of 2,552 meters (8,373 feet). It is a popular tourist attraction offers the chance to witness volcanic activity first hand. So far, the last activity reported has been the eruption that peaked on March 2, 2014 causing ash to rain down in Guatemala City, Antigua and Escuintla.

Chichicastenango Market known locally as “Chichi”, is no.1 shopping destination of Guatemala. Located between two and three hours southwest of Guatemala City, ChiChi may be home to the brightest and most vibrant native market in all of the Americas. The local vendors sell a huge variety of goods, including masks, textiles, jewelry, pottery, fabrics, and more.

Guatemala's motto is the 'Country of Eternal Spring'.

Once the site of the impressive ancient Mayan civilization, Guatemala was conquered by Spanish conquistador Pedro de Alvarado in 1524. They seperated from spain in the year 1821 and became a republic in 1839 after the United Provinces of Central America collapsed.

Guatemala is the largest economy in Central America. Tourism is one of the main drivers of the economy.

Because of the high rates of organized crime in Guatemala, the country has one of the highest murder rates in the world.

The largest collection of UNESCO World Heritage sites in any country are found in Guatemala.

Guatemala produces more jade than anywhere in the world, and its importance is visible in the National Museum of Archaeology and Ethnology in Guatemala City.

The mathematical concept of 'zero' was invented by the Mayans.

The name 'Guatemala' originates from a word meaning 'place of many trees'.

Quetzal is the currency of Guatemala and also the national bird, it is a fragile and rare animal. The bird´s tail feather was used for trade back in the Maya Empire.

There are still 22 different varieties of original Mayan languages are being spoken in Guatemala until this date.

There are approximately 2.3 million internet users in Guatemala.

Guatemala has the second-highest concentration of ozone in the world, according to The Economist World in 2007.

Guatemala is the birth place of blue denim.

For travelers with a sweet tooth, Guatemala and its rich chocolate heritage allow for an indulgent trip.

The highest point in Guatemala is Volcano Tajumulco which stands at 4,211 feet.

Guatemala is touted as the birthplace of chocolate, with the Mayans worshiping the cacao tree and calling chocolate the “food of the gods.”

Miguel Ángel Asturias is the only Guatemalan to win a Nobel Prize. He won the Nobel Prize in Literature.

United Fruit Company’s main rival was Guatemala, who exported lots of fruit. To eliminate them, United lied to the US government that Guatemala’s government was Pro-Soviet. The US staged a coup, which led to the 36 year long Guatemalan civil war.

Major exports from Guatemala include meat, fruits and vegetables, sugar, coffee and cardamom.
Share This