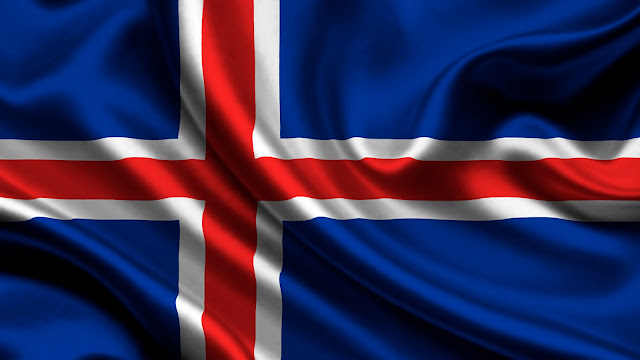 Iceland was home to the first female president in the world. She was elected in 1980. Her name was Vigdis Finbogadottir.

Iceland , also called the Republic of Iceland, is a Nordic island country between the North Atlantic and the Arctic Ocean.

Iceland is a geologically young landscape due to its location on the Mid-Atlantic Ridge between the Eurasian and North American tectonic plates. The island is therefore highly volcanically and geologically active.

If someone wishes to name their baby with a name not previously used in the country, they must get it approved by the Icelandic Naming Committee.

Approximately 85% of the heating to homes in Iceland is supplied by geothermal power stations. These power stations use energy from volcanoes and vents to supply the heat.

Despite the cold temperatures in Iceland there are many farms. The most common animals to be found on the farms in Iceland are sheep.

Icelandic is the official language of Iceland.

The currency of Iceland is the Icelandic króna.

Reykjavik which means ‘smoky bay’ is the capital city of the Republic of Iceland with 184,000 inhabitants.

Iceland has many geothermal vents at its surface, which allow the earth's heat to escape. There are also several hot springs, and mud pools.

Iceland is located on the Eurasian and North American tectonic plates.

There is a volcanic eruption every 4 years on average.

Hekla is Iceland’s most active volcano, Hekla is also a common female name in Iceland.

8% of Iceland is covered by Vatnajokull, which is the country's largest volcano.

There are no forests in Iceland.

Iceland has 20 active volcanoes. The most active are Hekla and Grimsvoetn.

Geysir sometimes known as The Great Geysir, is a geyser in southwestern Iceland. It was the first geyser described in a printed source and the first known to modern Europeans.The English word geyser derives from Geysir.

The Icelandic tradition of bathing outdoors in volcanically heated pools dates right back to Viking times.

The Blue Lagoon geothermal spa is one of the most visited attractions in Iceland.

Gullfoss is a waterfall located in the canyon of Hvítá river in southwest Iceland.Gullfoss is also one of the most popular tourist attractions in Iceland.

Iceland, as an island, has roughly 5000 kilometers of coastline.

The languages most commonly used in Iceland are Icelandic and English, but German and Nordic are also commonly spoken. Icelandic is similar to the language spoken by Norwegian's more than 1000 years ago.

The energy of the Iceland volcanoes and vents is used by geothermal power stations and supplies the heating to around 85% of all households.

Iceland was one of the last places on earth to be settled by humans.

The first people to live on Iceland are thought to have been Irish monks around the year AD 800. In the 9th century, Norsemen arrived in Iceland.

The only native land mammal when humans arrived was the Arctic fox.

Eaten regularly as a snack or with meals, the dairy product Skyr is one of the most popular foods in Iceland.

Iceland's nickname is the 'Land of Fire and Ice'.

The three colors of Iceland’s flag represent elements that make up the island. Red represents the island’s volcanic fires. White is for the snow and ice fields and blue the ocean.

Iceland has ranked number one consistently as the world’s most peaceful country and has the lowest score in the Global Peace Index measure.

Iceland does not have an army, navy or air force.

Iceland is home to one of the world’s oldest democracies, established in 930.

Iceland’s revenue from whale watching exceeds any income from whaling.

Iceland's capital city is Reykjavik, meaning 'smoky bay'. There are roughly 184,000 people living in the capital city, which is located in the south-western part of Iceland.

Poll results achieved over an extended period of time make it apparent that a majority of citizens of Iceland believe in the existence of elves.

During the months of June and July, Iceland has days with a full 24 hours of precious, beautiful sunlight. Some people in Iceland look at it as a splendid time to catch up on their golf at midnight sun.

Northern Lights or Aurora Borealis can be seen during mid-winter (November-December) when the weather is clear.

The only indigenous land mammal in Iceland is the Arctic fox. It was there before humans arrived.

In 1980, Iceland became the first country to elect a women president. Vigdís Finnbogadóttir was president until 1996.

This nation boasts the highest number of artists and authors per capita.

The last name of Icelanders is derived from their father’s first name.

Iceland is a neutral country, and has no air force, navy, or army.

In Iceland owning a pet snake, lizard or turtle is against the law.

Icelanders watch more movies than any other nation.

Seabirds are common in Iceland, including the kittiwakes, skuas, and Puffins.

Between November and March it is possible to see the Northern Lights in the sky.

Consumption of Coca–Cola per capita is higher than in any other country.