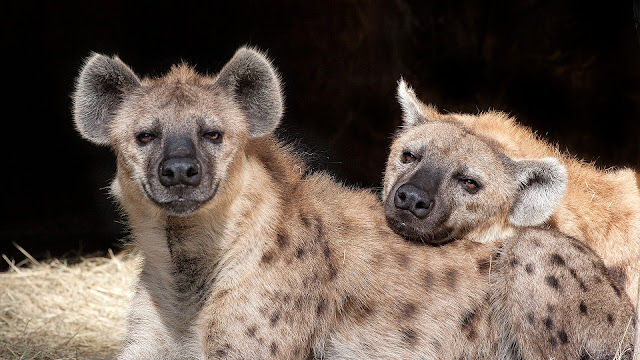 Worst enemies of hyenas are lions and hunting dogs. Hyenas are cannibals. They may attack and eat other hyenas, especially when they are young.

Hyenas are not members of the dog or cat families. Instead, they are so unique that they have a family all their own, Hyaenidae.

Male and female hyenas look alike and have very similar genitals, but they are not hermaphrodites (animals that may act both as males and as females at the same time). Only female hyena gives birth and takes care of her cubs.

They live in savannas, grasslands, sub-deserts, forests and mountains of Africa and Asia.

After mating season, it takes 90-110 days for babies to be born. One female gets 2-4 cubs and she takes care of them in the "natal den" (special den reserved only for mother with cubs) for 4 weeks.

Hyenas have an average lifespan of 12 years, but they can live up to 25 years.

Cubs fight with each other to establish dominance and achieve best feeding position or desired order of feeding. This fight might end up fatally.

There are four members of the Hyaenidae family: the striped hyena, the “giggly” spotted hyena, the brown hyena, and the aardwolf (it’s a hyena, not a wolf).

Mother feeds cubs with milk 12-18 month, but they will start eating meat as soon as they reach 5th month.

One of the most characteristic sounds that hyena produce is laughter. This sound alerts other hyenas that new food source is located.

Hyenas use various sounds, postures and signals to communicate with each other.

They are nocturnal animals (hunt at night).

Spotted hyenas are very social and live in groups called clans. Clans can have up to 80 members; Once thought to be solitary, striped hyenas actually live in small groups. However, they forage alone; Although often solitary in their habits, brown hyenas will form clans of up to 10 members; Aardwolves have often been mistaken for solitary animals. In fact, they live as monogamous pairs with their young.

Hyenas are primarily nocturnal animals, but sometimes venture from their lairs in the early-morning.

Spotted hyenas may kill as many as 95% of the animals they eat, while striped hyenas and brown hyenas are largely scavengers. Aardwolves are insectivores, and they mainly eat termites.

Hyenas use various sounds, postures and signals to communicate with each other.

Spotted hyenas “laugh” as a form of communication to relay excitement or frustration. This vocalization can often be heard during a hunt.

They are both hunters and scavengers (they eat carrions).

Matting typically happens outside of the clan. Non-related males and females will mate after a courtship that can last several days. Hyenas usually bear litters of two to four cubs, which, unlike the other two species, are born with their eyes open.

Hyenas live in territorial and large clans that can consist of up to 80 members. Aardwolves are solitary animals that gather only during mating season.

Cubs begin to eat meat from kills near the den at about 5 months, but they are suckled for as long as 12 to 18 months, an unusually long time for carnivores. At around 2 years, the cubs are considered mature and ready to leave their mother.

Female spotted hyenas are more muscular and more aggressive than their male counterparts. This is because the females have three times as much testosterone in their bodies. As a result, spotted hyena societies are matriarchal.

The hyena is Africa’s most common large carnivore.

Despite their low diversity, hyenas are unique and vital components of most African ecosystems.

Hyenas and lions often fight over the same territories and hunt the same prey. This leads to fierce competition between the two animals. They steal each other’s food and kill off the young of their enemies.

Females are larger and more dominant than males.

Hyenas have been on Earth for 24 million years.

The mongoose and the meerkat are the hyena’s closest relatives.

A hyena’s heart is twice as large as that of similar-sized mammals.

A spotted hyena can eat up to one third of its body weight at one meal.

Spotted hyenas can run up to 60 kilometers (37 miles) per hour.

Reputed to be cowardly and timid, the hyena can be bold and dangerous, attacking animals and humans.

Among hyenas, only the spotted and striped hyenas have been known to become man-eaters.

In ancient Egypt hyenas were domesticated and even eaten!

Maasai people of Kenya and Tanzania leave their dead to be consumed by hyenas instead of burying them.

Hyenas feature prominently in the folklore and mythology of human cultures with which they are sympatric (two species or populations exist in the same geographic area). Hyenas are commonly viewed as frightening and worthy of contempt, and are associated with witchcraft, because their body parts are used as ingredients in traditional medicine. In some cultures, hyenas are thought to influence people’s spirits, rob graves, and steal livestock and children.

The size of an animal’s frontal cortex is believed to be connected to its social intelligence, and hyenas have a frontal cortex on par with primates. A study done by Duke University showed that a captive pair of hyenas performed better at problem-solving and social cooperation than chimpanzees. Even more amazing is that during the study, the hyenas solved all the problems in silence, using only non-verbal signals for communication.

Hyenas are featured in Disney’s animated features, such as Dumbo, Lady and the Tramp, Noah’s Ark, Bedknobs and Broomsticks, and The Lion King.

The striped hyena is mentioned in the Bible.
Share This