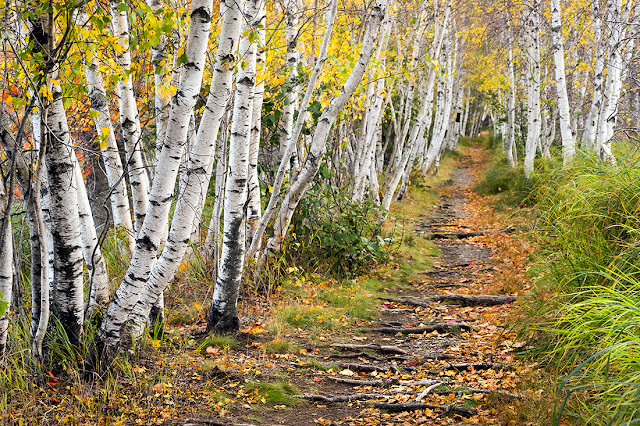 Birch is deciduous tree that belongs to the family Betulaceae.

Substances isolated from different parts of birch are used in cosmetic industry for the production of soaps and shampoos.

It is found in almost all countries having a temperate climate.

Bark contains substances such as betulin and betulinic acid that are used in the pharmaceutical industry. Bark is used as old folk remedy for the stomach ache. Also, soaked bark can be used as a cast for the broken arm.

There are about 60 different species of birch.

Pollen of the birch tree is responsible for 15 to 20% cases of hay fever in northern hemisphere.

Birch trees thrive in moist soil and full sunlight. Dry conditions are unfavorable for the tree due to its shallow root system.

Leaves of birch are used in the preparation of tea in Finland.

The usual lifespan of the birch is 40-50 years. In favorable conditions, this tree can live for as long as 200 years.

Birch sap is used in the manufacture of wine and beer in the northern Europe, Russia and China. It can also serve as a substitute for sugar. Birch syrup, made of birch sap, is used like a dressing for the pancakes.

The average height of a birch tree is around 12 meters (40 feet tall), but the paper and yellow birch can grow up to 24 meters (80 feet) tall.

Birch tree can live from 30 to 200 years, depending on the species, quality of the soil and climate.

Wood of birch tree is used in the manufacture of furniture, toys, basketball courts, doors and canoes. Wood of Paper Birch is used in the production of paper.

Birch trees are recognizable by their bark, which peels off in strips in all birches except the gray birch. Bark of the birch can be white, grey, yellow, silver or black in color. Young trees have smooth bark. Deep ridges on the bark are characteristic for the older plants.

Wood of birch tree is highly flammable. It can catch a fire even when it is wet. Because of that, birch tree is used as high-quality firewood.

Birch trees have simple leaves with toothed edges called margins. They often appear in pairs, but these pairs are really borne on spur-like, two-leaved, lateral branchlets. Birch leaves range in color from grass green to dark green during the growing season, turning yellow in the fall.

Seeds and bark of the birch are source of food for forest animals such as rabbits, deer and birds.

Both male and female flowers bloom on the same tree in the birch family. Male flowers, called catkins, bloom in the late summer or fall. They bloom in erect clusters at the tips of long shoots and persist through winter. In the spring, the number of male catkins quadruple in length and droop from the branches. Female flowers bloom in pairs or singly in the early spring before the leaves.

The samara fruit produced by the tree releases around one million seeds every year. The fruit is small although the wings may be obscure in some species.

Birches are also known as ‘pioneer species‘ due to their ability to grow on uncolonized land.

Pollen grains released by the birch tree are responsible for 15 to 20% cases of hay fever in northern hemisphere.

Individual flowers are arranged in long clusters known as catkins. They hang from the branches during the summer.

11 species of birch are on the IUCN 2011 Green List of Threatened Species.

Birch has shallow root system which can damage sidewalks and roads in urban areas.

Birch is used as firewood because of its high calorific value per unit weight and unit volume. It burns well, without popping, even when frozen and freshly hewn. The bark will burn very well even when wet because of the oils it contains. With care, it can be split into very thin sheets that will ignite from even the smallest of sparks.

Many Native Americans in the United States prized the birch for its bark, which because of its light weight, flexibility, and the ease with which it could be stripped from fallen trees, was often used for the construction of strong, waterproof but lightweight canoes, bowls, and wigwams.

Bark of the birch can be white, grey, yellow, silver or black in color. Young trees have smooth bark. Deep ridges on the bark are characteristic for the older plants. Bark of all birch species (except Grey Birch) peels off in long horizontal strips.

Birch bark has been used as paper for centuries. The oldest dated birch bark manuscripts are numerous Gandh─üran Buddhist texts from approximately the 1st century CE, believed to have originated in Afghanistan.

The Roman period Vindolanda tablets (the oldest surviving handwritten documents in Britain) also use birch as a material on which to write.

Baltic birch is among the most sought-after wood in the manufacture of speaker cabinets.

Birch sap is a traditional drink in Northern Europe, Russia, and Northern China. The sap is also bottled and sold commercially. Birch sap can be used to make birch syrup, which is used like maple syrup for pancakes and waffles.

Birch has green leaves that are oval or elliptical in shape. Leaves are single or double serrated on the edges.

Bark contains substances such as betulin and betulinic acid that are used in the pharmaceutical industry. Bark is used as old folk remedy for the stomach ache.

Birch bark can be soaked until moist in water, and then formed into a cast for a broken arm.

Extracts of birch are used for flavoring or leather oil, and in cosmetic industry for the production of soaps and shampoos.

Used by the Native American Indians as the center pole in yurts & tee pees. This was symbolic of new beginning – the center must start fresh the process of gathering, shelter, and all other representations of home.

In Celtic cultures, the birch symbolises growth, renewal, stability, initiation and adaptability because it is highly adaptive and able to sustain harsh conditions with casual indifference.

Birch is a medium-sized tree that can reach 30 to 50 feet in height. Some species may grow to the height of 80 feet under appropriate conditions.

Ancient Siberians hailed it as sacred – calling it the ladder that spanned the gap between heaven & earth.

As a Chinese symbol, Birch is honored for its attributes of protection, communication, & rejuvenation.

The birch is the national tree of Russia and Finland.

The Orn├żs birch is the national tree of Sweden.

The birch is New Hampshire’s state tree.
Share This