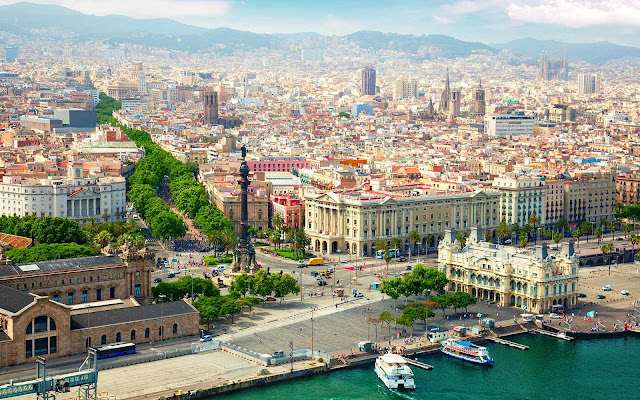 Barcelona is the capital of Catalonia and the second largest city in Spain, after Madrid.

FC Barcelona is one of the wealthiest football (soccer in United States) clubs in the world. FC Barcelona has a museum dedicated to the club. It is the most often visited museum in Barcelona.

Barcelona is located on the northeast coast of the Iberian Peninsula, facing the Mediterranean Sea, on a plain approximately 5 km (3 mi) wide limited by the mountain range of Collserola, the Llobregat river to the southwest and the Besòs river to the north.

Five of the seven main beaches in Barcelona were created prior to Barcelona hosting the 1992 Summer Olympics.

As of January 2017, the population of Barcelona is about 1.7 million people.

Many people in Barcelona prefer to walks as there is an accident approximately every 19 seconds, making it a rather risky city to drive in.

It is one of the most densely populated cities in Europe.

In 1999 Barcelona received a Royal Gold Medal for architecture from the Royal Institute of British Architects. It is the only city to receive the honor that is usually given to an individual or group.

The average elevation in Barcelona is 12 meters (39 feet) above sea level.

At 512 meters (1,680 feet) above sea level Tibidabo is the highest point in the city of Barcelona.

The origin of the earliest settlement at the site of present-day Barcelona is unclear. The ruins of an early settlement have been found, including different tombs and dwellings dating to earlier than 5000 BC.

The city itself was founded by the Romans who set up a colony called Barcino at the end of the 1st century BC. The colony had some thousand inhabitants and was bounded by a defensive wall, the remains of which can still be seen in the old town.

For over 200 years, Barcelona was under Muslim rule, and, following the Christian reconquest, it became a county of the Carolingian Empire and one of the main residences of the court of the Crown of Aragon.

The fruitful medieval period established Barcelona’s position as the economic and political center of the Western Mediterranean.

There are 9 UNESCO World Heritage Sites in Barcelona. Seven of them were designed by the same architect who is responsible for the design of the Sagrada Familia.

From the 15th to 18th centuries Barcelona entered a period of decline, while it struggled to maintain its economic and political independence.

The 20th century ushered in widespread urban renewal throughout Barcelona city, culminating in its landmark Eixample district, which showcases some of Barcelona’s most distinctive Catalan art-nouveau, or modernista, buildings.

Barcelona has a rich heritage and is today an important cultural center and a major tourist destination. Particularly renowned are the architectural works of Antoni Gaudi, many designated UNESCO World Heritage Sites.

One of Europe’s most unconventional churches, La Sagrada Familia is the most famous sight in Barcelona. It was designed by Catalan architect Antoni Gaudí (1852–1926). Construction of La Sagrada Familia began in 1882 and is still underway. It has recently been announced that La Sagrada Familia will finally be finished by 2026, on the 100th anniversary of Gaudí’s death. Gaudí’s work on the building is part of a UNESCO World Heritage Site.

The Sagrada Familia is a cathedral that is being built in Barcelona. It has been under construction since 1882 and is expected to take at least 200 years to complete.

The heart of Barcelona’s social life is found on La Rambla, a broad, tree-shaded avenue that divides the Old Town into two parts. La Rambla stretches from the Plaça de Catalunya, where the beautiful Romanesque 12th-century Convent of Santa Anna stands, all the way down to the port. This wide street, featuring expansive pedestrian sidewalks, is lined with many shops, restaurants, and outdoor cafés, making it one of the most popular hangouts in the city.

The Columbus Monument in Barcelona was built in 1888. It was meant to honor Christopher Columbus and to remind people that he reported to King Ferdinand V and Queen Isabella I first, when he returned from his first voyage.

For 2,000 years, the Gothic Quarter has been the spiritual and secular center of the city. Relics of ancient Roman buildings are still found here, but the Middle Ages are best represented by the historic monuments packed into this quarter. A masterpiece of Gothic architecture, the medieval cathedral stands on Monte Tabor, the highest point in the town center.

The largest cruise port in Europe is located in Barcelona - the Port of Barcelona.

Following London, and Paris, Barcelona is the third most popular tourist destination in Europe.

Casa Batlló is a renowned building located in the center of Barcelona and is one of Antoni Gaudí’s masterpieces. A remodel of a previously built house, it was redesigned in 1904 by Gaudí and has been refurbished several times after that. Like everything Gaudí designed, it is only identifiable as Modernisme or Art Nouveau in the broadest sense.

Barcelona is a popular tourist destination with approximately 8 million visiting the city each year.

The Casa Mila also known as La Pedrera or The Quarry, a reference to its unconventional rough-hewn appearance. It was the last private residence designed by architect Antoni Gaudí and was built between 1906 and 1912. In 1984, it was declared a World Heritage Site by UNESCO.

The Palau de la Música Catalana is a concert hall in Barcelona. Designed in the Catalan modernista style by the architect Lluís Domènech i Montaner, it was built between 1905 and 1908. In 1997, the Palau de la Música Catalana was declared a UNESCO World Heritage Site. Today, more than half a million people a year attend musical performances in the Palau that range from symphonic and chamber music to jazz and Cançó (Catalan song).

Barcelona is located along the Mediterranean Sea.

The Park Güell is a public park system composed of gardens and architectonic elements located on Carmel Hill. The park was designed by Antoni Gaudí. One of Gaudi’s best friend and patron, Eusebi Güell commissioned Gaudi to design the park. The park was built between 1900 and 1914 and was officially opened as a public park in 1926. In 1984, UNESCO declared the park a World Heritage Site.

Barcelona, which is the capital of Catalonia, is one of four provinces in the autonomous community. The other three include Tarragona, Lleida, and Girona.

The Magic Fountain of Montjuïc is a fountain located at the head of Avinguda Maria Cristina in the Montjuïc neighborhood of Barcelona. The fountain, like most of the surrounding developments, was constructed for the 1929 Barcelona International Exposition.

Some believe that Barcelona was founded by Hercules.

Camp Nou is the home stadium of FC Barcelona since its completion in 1957. With a seating capacity of 99,354, it is the largest stadium in Spain and Europe, and the second largest association football stadium in the world in capacity.

Some believe that Barcelona may have been named after Hamilcar Barca, a Carthaginian general who may have founded Barcelona in the 3rd century BC.

Barcelona’s coastline stretches for 4.5 km (2.8 mi) and offers the tourists a wide variety of excellent beaches. The most popular beaches among our visitors include Barceloneta, Mar Bella, Nova Icaria and Bogatell.

Barcelona is one of the world’s leading tourist, economic, trade fair and cultural centres, and its influence in commerce, education, entertainment, media, fashion, science, and the arts all contribute to its status as one of the world’s major global cities.

The founding of Barcelona is the subject of two different legends. The first attributes the founding of the city to the mythological Hercules. The second legend attributes the foundation of the city directly to the historical Carthaginian general, Hamilcar Barca, father of Hannibal, who supposedly named the city Barcino after his family in the 3rd century BC, but there is no historical or linguistic evidence that this is true.

In 1900, Barcelona had a population of 533,000 people, which grew steadily but slowly until 1950, when it started absorbing a high number of people from other less-industrialized parts of Spain. Barcelona’s population peaked in 1979 with 1,906,998 people, and fell throughout the 1980s and 1990s as more people sought a higher quality of life in outlying cities in the Barcelona Metropolitan Area.

The city is known for hosting the 1992 Summer Olympics as well as world-class conferences and expositions and also many international sport tournaments.

Futbol Club Barcelona commonly known as Barcelona and familiarly as Barça is one of world’s most popular football clubs.
Share This