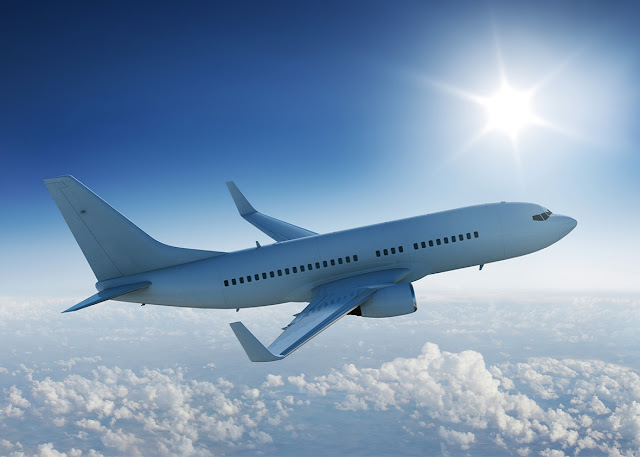 Airplane or aeroplane (informally plane) is a powered, fixed-wing aircraft that is propelled forward by thrust from a jet engine or propeller.

The largest cargo airplane today is the Antonov An-225 cargo jet. It has six engines and is capable of carrying 559,577 pounds. It also holds the record for airlifting the largest payload.

Aerodynamics is the way air moves around things. The rules of aerodynamics explain how an airplane is able to fly.

The largest passenger airplane today is the Airbus A380, which can hold 532 seated passengers.

The four forces of flight are lift, weight, thrust and drag. These forces make an airplane move up and down, and faster or slower. How much of each force there is changes how the airplane moves through the air.

The average 747 airplane has between 150 and 175 miles of electrical wiring running through it.

First attested in English in the late 19th century (prior to the first sustained powered flight), the word airplane, like aeroplane, derives from the French aéroplane, which comes from the Greek ἀήρ (aēr), “air” and either Latin planus, “level”, or Greek πλάνος (planos), “wandering”.

Leonardo da Vinci‘s 15th-century dream of flight found expression in several rational but unscientific designs, though he did not attempt to construct any of them.

Orville and Wilbur Wright were the inventors of the first airplane. On December 17, 1903 Orville piloted the gasoline-powered, propeller-driven biplane, which stayed aloft for 12 seconds and covered 36 meters (120 feet) on its inaugural flight.

Once the Wright brothers demonstrated that the basic technical problems had been overcome at the start of the 20th century, aviation developed quickly.

World War I served as a testbed for the use of the airplane as a weapon. Airplanes demonstrated their potential as mobile observation platforms, then proved themselves to be machines of war capable of causing casualties to the enemy.

Airplane travel is safer than ground travel. It is estimated that approximately 95% of those involved in airplane crashes survive. People sitting in the tail end have an estimated 40% higher chance of survival if a crash occurs.

The first international commercial flights took place between the United States and Canada in 1919.

On April 6, 1924, eight U.S. Army Air Service pilots and mechanics in four airplanes left Seattle, Washington, to carry out the first circumnavigation of the globe by air. They completed the journey 175 days later on September 28, after making 74 stops and covering about 44,340 kilometers (27,550 miles).

In 1931, with navigator Harold Gatty, Wiley Post piloted a Lockheed Vega 5B monoplane around the world in slightly less than 8 days 16 hours.

In 1932 Amelia Earhart became the first woman to complete a solo transatlantic flight. Five years later, during a global attempt, she disappeared somewhere over the Pacific.

The first woman to receive her pilot's license was Harriet Quimby. She received her license in 1911. Harriet was also the first female pilot to cross the English Channel in an aircraft.

The world’s first commercial jetliner, the de Havilland Comet, was introduced in 1952. The Boeing 707, the first widely successful commercial jet, was in commercial service for more than 50 years, from 1958 to 2010. The Boeing 747 was the world’s biggest passenger aircraft from 1970 until it was surpassed by the Airbus A380 in 2005.

The Concorde was a commercial aircraft, and one of only two capable of supersonic flight. It could travel from Paris to New York in 3.5 hours. Most flights took 8 hours to cover the same distance.

Generally acknowledged as the largest airplane in the world, the single Antonov An-225 is the world’s heaviest aircraft ever (maximum takeoff weight greater than 640 tons) and the largest aircraft in length (84 m (275 ft 7 in) and wingspan (88.4 m (290 ft)).

Some military and experimental aircraft are capable of breaking the sound barrier by traveling faster than the speed of sound. Sound travels at 768 miles per hour.

The Airbus A380 is the largest passenger aircraft ever made. Capable of carrying 850 passengers.

Bats, birds, and insects are the only living creatures that are capable of powered flight. Flying fish and flying squirrels can glide, but this is not real flight.

Each airplane is different as to its’ stall speed – the speed at which there no longer is sufficient air flowing over the wings to maintain flight. There are many factors affecting stall speed for a given aircraft: carried weight, internal balance of the load, etc. Through clever engineering, some planes have very low stall speeds, close to 65 km/h (40 mph).

The shape of an airplane wing is called an airfoil. It is designed to provide lift for the airplane as it is propelled through the air.

Most pilots and copilots on major airlines are not allowed to eat the same food to avoid the possibility of food poisoning sickening the entire flight crew.

Only FIVE PER CENT of the world’s population has ever been on an aircraft.

About one in four people live with a fear of flying.

The language all international pilots must be able to speak? English.

At 2.7 kilometer (1.7 miles), the shortest scheduled airline flight in the world (as of December, 2016) was the British Airways/Loganair (codeshare) Westray to Papa Westray route. Flights were scheduled for two minutes, but the actual flying time was closer to one minute.

There have been more astronauts than pilots who have flown the Concorde, which is now out of service. The Concorde was a turbo jet-powered, supersonic passenger jet airliner that was in service from 1976 to 2003. Many consider the aircraft an engineering marvel.

Orville and Wilbur Wright are commonly referred to as the Wright Brothers. They are credited with the first successful airplane design and flight.

Sir Richard Branson once lost a bet with Air Asia CEO Tony Fernandes on the winner of the 2010 F1 Grand Prix in Abu Dhabi. The loser had to work as a female flight attendant on the winner’s airline.

North Korea has its own airline, Air Koryo, which happens to be the only 1 star rated airline according to Skytrax.

Although it is the wings that keep the airplane in the air it is the lift, thrust, drag and weight that are responsible for flight.

In 1974, there was a “Not-For-Profit” airline named Freelandia that served organic food and had waterbeds. The airline went bankrupt in under a year.

Delta Airlines contract has a specific line allowing each passenger from Hawaii to carry one box or bag of pineapples.

It is estimated that a human loses approximately 1.5 quarts of water during a three-hour flight.

The longest endurance flight (refuelled and manned) lasted almost 65 days in a Cessna 172 in 1968 to promote a Nevada hotel. That record still stands.

In 1990 British Airways pilot Tim Lancaster was sucked out of a window when it broke off and was pinned to the aircraft for 20 minutes while crew clung to his legs before landing. He suffered only minor injuries and was flying within 5 months.

Oxygen masks on planes last between 10 and 20 minutes, so that a pilot can descend into an oxygen zone.
Share This