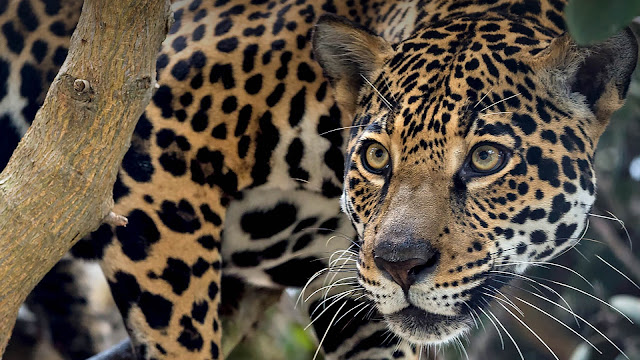 The jaguar (Panthera onca) is the largest cat in the Americas and the third-largest in the world (after the lion and tiger).

Size of their territory depends on the availability of food. When food is abundantly present - they hunt in smaller radius. Jaguars that live in areas where food is scarce need to walk long distances to find food.

At one time jaguars roamed all the way to the US-Mexico border, but jaguars are now only occasionally sighted in Texas and Arizona. Today significant numbers of jaguars are found only in remote regions of South and Central America—particularly in the Amazon Basin.

When female is ready to become a mother, she roars to inform the male that she is ready for the mating. Pregnancy lasts 92-113 days and usually 2-3 cubs are born.

The Jaguar is commonly found in rain forests, savannahs, and swamps, but at the northern end of its territory it may enter scrub country and even deserts.

Cubs are blind at birth and they depend on their mother in the first few months of their life completely. With three months they start eating meat and with 2 years they become completely independent from their mothers.

They are identified by their yellow or orange coats, dark spots and short legs. The dark spots on their coats are unlike any other cat spots. Each spot looks like a rose and are called rosettes.

They climb the trees easily and mark their territory by scratching the bark.

The jaguar is covered in rosettes for camouflage. The spots vary over individual coats and between individual Jaguars. The rosettes may include one or several dots and the shape of the dots varies. The spots on the head and neck are generally solid, as are those on the tail, where they may merge to form a band. The underbelly, throat and outer surface of the legs and lower flanks are white.

The jaguar has a compact body, a broad head and powerful jaws.

Unlike most cats, jaguars like to spend time in water and they are excellent swimmers.

From head to flank, these cats range in length from 1.2 to 1.95 meters (4 to 6 feet). The tail can add another 60 centimeters (2 feet) in length, , though their tails are quite short when compared to other large cats. Lions’ tails, by comparison, can grow up to 105 centimetersm (3.5 feet).

Typical lifespan in the wild is estimated at around 12–15 years; in captivity, the jaguar lives up to 23 years, placing it among the longest-lived cats.

Anaconda is the only natural enemy of jaguar. Worst enemies of jaguars are humans.

The jaguar is a solitary animal and lives and hunts alone; they only meet up to mate.

To keep other jaguars at bay, they mark their territory with urine or by marking trees with their claws. Their territories can be up to 80 square kilometers (30 square miles).

Jaguars like to remain hidden when they sleep. They typically find an area that is surrounded by trees. A jaguar may even sleep in a tree. Jaguars also rest in areas of tall grass.

The jaguar is often described as nocturnal, but is more specifically crepuscular (peak activity around dawn and dusk).

Jaguars are nocturnal (hunt at night) and solitary animals (live on their own).

Jaguars are carnivores, which means they eat only meat.

Jaguars are known to eat deer, peccary, crocodiles, snakes, monkeys, sloths, tapirs, turtles, eggs, frogs, fish and anything else they can catch.

Jaguars are considered a stalk and ambush predator and are not meant to run over long distances but prefer to surprise unsuspecting prey. They hunts mostly on the ground, but it sometimes climbs a tree and pounces on its prey from above.

Unlike most cats, which kill their prey by grabbing the throat and suffocating it, the jaguar kills by piercing its prey’s skull or neck with one swift bite – demonstrating the amazing strength of its powerful jaws and impressive teeth.

Jaguars are ambush predators that kill their victims using the element of surprise. They will pierce the skull of an animal and kill it with a single bite.

The jaguar can run in excess of 103 kilometers (64 miles) per hour or over short distances.

Unlike many other cats, jaguars do not avoid water; in fact, they are quite good swimmers.

Jaguars have no defined breeding season and will mate any time of year. After a gestation period of about 100 days, the female will give birth to a litter of 1 to 4 cubs. Cubs are blind at birth and they depend on their mother in the first few months of their life completely.

Name jaguar is derived from Indian word "yaguar" which means: "he who kills in a single leap".

It is estimated that there are now only around 15,000 jaguars left in the wild and conservation is centering on the establishment of protected national park areas which may serve to reduce the decline of the jaguars’ natural habitat. It is listed on Appendix I of CITES and as ‘near threatened’ by IUCN.

These beautiful and powerful beasts were prominent in ancient Native American cultures.

Some jaguars are melanistic, which means that they are almost entirely black. Only from the close distance, characteristic spots could be seen.

The name jaguar comes from the Native American word yaguar, which means “he who kills with one leap.”

In pre-Columbian Central and South America, the jaguar was a symbol of power and strength.

In some traditions the Jaguar God of the Night was the formidable lord of the underworld.

Melanistic or all black jaguars occur due to a genetic mutation. This mutation causes the skin and fur to contain larger amounts of a dark pigment. Only from the close distance, characteristic spots could be seen.

They have tan or orange fur covered with black spots arranged in rosettes (sports are organized in the shape of rose).

The difference between jaguar’s and leopard’s fur lies in the center of the Jaguars rosettes, because unlike the leopard, the Jaguar has spots inside of its rosettes!

Jaguars can see six times better than humans at night or during darker conditions due to a layer of tissue in the back of the eye that reflects light.

Jaguars will dip their tails into the water to lure fish, much like a fishing line.

The jaguar and its name are widely used as a symbol in contemporary culture.

It is the national animal of Guyana, and is featured in its coat of arms.

It is also the national animal of Brazil.

Jaguar is widely used as a product name, most prominently for a British luxury car brand.
Share This