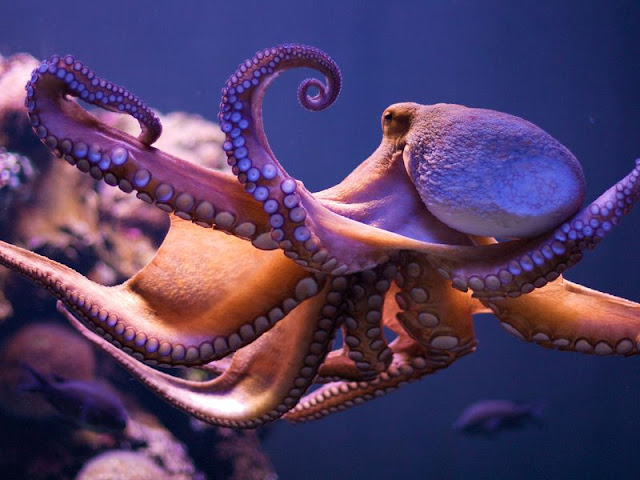 If predator grabs them for any tentacle, they will reject it. Soon after, new tentacle will grow.

The octopus is a cephalopod mollusc of the order Octopoda.

Some octopuses produce very potent toxin that can stun the prey or hurt a man. Most dangerous octopus is blue-ringed octopus that can kill few people at once.

There are around 300 recognized octopus species, which is over one-third of the total number of known cephalopod species.

Male octopus will die few months after mating. Female will survive until her eggs hatch. She will die of starvation, because she will not eat three months (time needed for eggs to hatch).

Octopuses live in all the world’s oceans. They inhabit diverse regions of the ocean, including coral reefs, pelagic waters, and the ocean floor.

Female lay up to 150 000 eggs in a week. After hatching, small octopuses will float short period of time with plankton and then swim back to the bottom of the sea.

All octopuses have head, called mantle, surrounded with 8 arms, called tentacles. All vital organs are located in their head.

They can change their color and texture of the skin to blend with environment and become invisible.

Octopuses are invertebrates, which mean that they are boneless. Only hard structure in their body is beak which looks like a parrot beak. They use their beaks for eating.

They have 3 hearts and their blood is blue in color.

Octopuses live from few months to few years, depending on the species.

The giant Pacific octopus grows bigger and lives longer than any other octopus species. The size record is held by a specimen that was 9.1 meters (30 feet) across and weighed more than 272 kilograms (600 pounds). Averages are more like 5 meters (16 feet) and 50 kilograms (110 pounds).

Octopuses are mainly famous for their ability to escape predators using various techniques.

The world’s smallest known octopus is the octopus wolfi. It was discovered and officially classified in 1913. The octopus wolfi measures only 1.5 centimeters (0.6 inches) length and weighs less than a gram (o.o3 ounces).

Because of the highly developed nervous system, some people believe that octopuses feel the pain during operation and demand the use of anesthesia before surgery.

The octopus spends much of its solitary life in a den, leaving at night to hunt.

Octopuses are highly intelligent, possibly more so than any other order of invertebrates.

They have incredibly developed nervous system and they can learn various things. Some experiments showed that they can solve puzzles, distinguish shapes and patterns. Also they can develop both short- and long-term memory.

Octopuses have keen eyesight. Like other cephalopods, they can distinguish the polarization of light. Color vision appears to vary from species to species.

Octopuses also have an excellent sense of touch. The octopus’s suction cups are equipped with chemoreceptors so the octopus can taste what it is touching.

Although they are invertebrates, they have incredibly developed nervous system and they can learn various things. Some experiments showed that they can solve puzzles, distinguish shapes and patterns. They can develop both short- and long-term memory.

The octopus is well known for being a master of disguise and is able to blend into pretty much any background using its elaborate camouflage. The octopus not only uses this to its advantage for both hiding from potential prey and predators, but it is also thought to play a role in the male octopuses mating display, in order to attract a female octopus.

They will eject dark ink that will confuse the predators and give them a chance to escape.

They have 3 hearts and their blood is blue in color.

Octopuses have several secondary defenses (defenses they use once they have been seen by a predator). The most common secondary defense is fast escape. Other defenses include distraction with the use of ink sacs and autotomising limbs – If predator grabs them for any tentacle, they will reject it. Soon after, new tentacle will grow.

Also their soft bodies, with no internal or external skeleton, can squeeze into impossibly small cracks and crevices where predators can’t follow.

Octopuses move with a simple elegance, but they have no rhythm, unlike most animals.

Using strong suction cups (240 on each tentacle), they hunt crabs, mollusks and crayfish.

Octopuses have a relatively short life expectancy, with some species living for as little as six months. But larger species, such as the giant pacific octopus, may live for up to five years under suitable circumstances.

However, reproduction is a cause of death: males can live for only a few months after mating, and females die shortly after their eggs hatch. They neglect to eat during the period spent taking care of their unhatched eggs, eventually dying of starvation.

Female lay up to 150 000 eggs in a week. After hatching, small octopuses will float short period of time with plankton and then swim back to the bottom of the sea.

Only hard structure in their body is beak which looks like a parrot beak. They use their beaks for eating.

A baby octopus is about the size of a flea when it is born.

Young octopuses learn almost no behaviors from their parents, with whom they have very little contact.

Some enemies of the octopus include eels, sharks, halibut, ling cod and dolphins.

The octopus has been shown to use tools. At least four specimens of the veined octopus (Amphioctopus marginatus) have been witnessed retrieving discarded coconut shells, manipulating them, and then reassembling them to use as shelter.

All octopuses have head, called mantle, surrounded with 8 arms, called tentacles. All vital organs are located in their head.

Instead of mating, female octopuses will sometimes strangle males and eat them.

The Blue-ringed octopus is one of the world’s most venomous marine animals: it can kill you in one bite, there is no antivenom.

The Mimic Octopus can impersonate up to 15 marine species, including Sea Snakes, Stingrays, Lionfish, and Jellyfish.

Female blanket octopuses can be 40,000 times more massive than the male, it’s the largest sex size discrepancy in the animal kingdom.

It’s illegal in many countries to perform surgery on an octopus without anesthesia due to their intelligence.

Octopus wrestling was a popular sport in the 1960s. A diver would fight a large octopus in shallow water and drag it to the surface.

Though octopuses can be difficult to keep in captivity, some people keep them as pets.

Octopus is eaten in many cultures. They are a common food in Mediterranean and Asian sea areas.

Octopuses are eaten alive in Korea.

The oldest octopus fossil is 296 million years old.
Share This