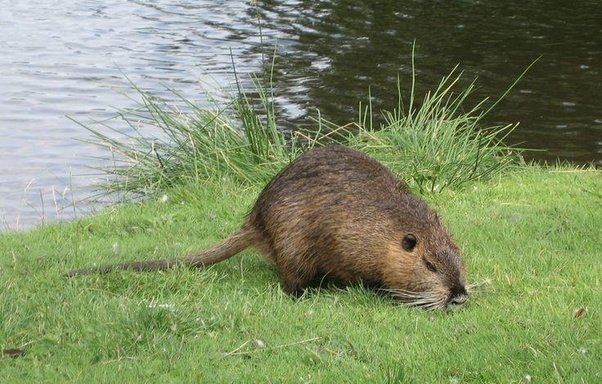 Muskrats are adapted to the semi-aquatic life, which means that they can live both on the ground and in the water.

The muskrat (Ondatra zibethicus) is a medium-sized semiaquatic rodent.

Muskrats can swim at the speed of 3 miles per hour, using their paddle like feet and vertically flattened hairless tail. They can dive 15 to 20 minutes without returning to the surface to breathe.

The muskrat is found in swamps, marshes, and wetlands from northern North America to the Gulf coast and the Mexican border.

Muskrats are active mostly during the night and at dusk and dawn (nocturnal animals).

Early in the 20th century, muskrats were introduced to northern Eurasia including Ukraine, Russia, Siberia, adjacent areas of China and Mongolia.

Muskrats live in family groups composed of breeding couple and their offspring. Their home usually occupies a territory of around 200 yards.

Muskrats are live in wet environments, favoring locations with 1.2 to 1.8 meters (4 to 6 feet) of water. While muskrats are found in ponds, lakes, and swamps, their favorite locations are marshes, where the water level stays constant.

Muskrats use their sharp claws to dig burrows on the riverbanks. They build lodges surrounded by water using different plant materials. Muskrats also form floating platforms that are used for feeding.

The lifespan of muskrats is from 3 to 5 years in the wild and up to 10 years in captivity.

Mating season of muskrats takes place from March to July. They are polygamous animals, which mean that they have more than one mating partner.

Female produces several litters per year. Pregnancy lasts 28 to 30 days and ends with 6 to 7 babies. They are naked, blind and helpless at birth. Babies depend on the mother in the first month of their life. After 6 weeks, young muskrats are ready to leave the den.

Muskrats can survive several years in the wild, but they rarely live longer than one year.


Muskrats have large, robust bodies, the tail is flat and scaly. Their heads are very large and their ears are almost invisible underneath the fur. The whiskers are mediun size. Muskrats have short legs and big feet; the back feet are slightly webbed for swimming.

Muskrats are covered with short, thick fur, which is medium to dark brown or black in color, with the belly a bit lighter (countershaded); as the age increases, it turns a partly gray in color.

They spend most of their time in the water and are well suited for their semiaquatic life.

Muskrats are excellent swimmers and can evade many predators by escaping into water or into their burrows and nests. They can stay submerged for up to 20 minutes and swim as fast as 5 kilometers (3.1 miles) per hour and can even swim backwards.

Muskrats have broad head with small ears that can be closed when animal dives.

Muskrats follow trails they make in swamps and ponds. When the water freezes, they continue to follow their trails under the ice.

They find shelter in bank burrows and their distinctive nests. Bank burrows are tunnels excavated in a bank. The nests of the muskrats are formed by piles of vegetation placed on top of a good base, for example a tree stump, generally in 40 to 100 cm (15 to 40 inches) of water.

Muskrats are active throughout the year and, although mainly nocturnal, are sometimes seen during the day. They are susceptible to cold and wind and spend more time in their dens during winter.

Outside the breeding season, muskrats are solitary except at times during the winter when several may share a den to conserve body heat. Home ranges vary in size from 30 to 350 meters (100 to 120 feet) in diameter. Individuals confine much of their activity to the area within 15 meters (50 feet) of the den.

Front feet of muskrats are equipped with long and sharp claws. Hind feet are webbed.

Muskrats are covered with thick brown fur that consists of two layers. Outer layer is waterproof.

Eating mostly grasses and cattails, muskrats consume the roots and stalks of a wide variety of other aquatic plants; they are, however, occasionally predatory, taking freshwater mussels, snails, crustaceans, salamanders, fish, and young birds for food.

Muskrats communicate by a secretion from their glands called musk. This scent also serves to warn intruders. They are capable of vocalizing by squeaks and squeals.

Muskrats have a high reproductive rate, producing up to 3 litters per year, each with 6 to 7 young. They are polygamous and breeding takes place from late March through July. After a gestation period of 28 to 30 days, the young are born blind, helpless, and almost naked. The young are dependent on the female for about 30 days. They leave the den at about 6 weeks of age.

The muskrat is the only species in genus Ondatra and tribe Ondatrini.

Muskrats are referred to as “rats“ in a general sense because they are medium-sized rodents with an adaptable lifestyle and an omnivorous diet. They are not, however, members of the genus Rattus.

Muskrats are widespread and abundant. Populations remain stable even when they are being hunted for fur, affected by disease, or a target for large predator populations because muskrats have the ability to reproduce quickly.

Historically, the muskrat was trapped for its thick and durable coat, and it is still sought by the fur trade.

In several Native American creation myths, the muskrat dives to the bottom of the primordial sea to bring up the mud from which the earth is created, after other animals have failed in the task.
Share This