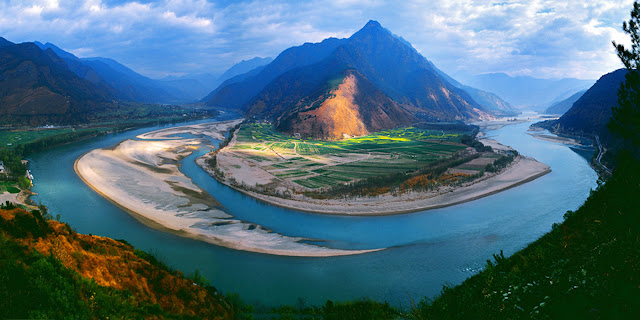 The Yangtze River (or, “Changjiang” in Chinese, literally, the “long river”), is the longest river in China, running 6,300 kilometers (3915 miles).

The Yangtze River is the third longest river in the world after the Nile River in Africa and the Amazon River in South America.

The river is the longest in the world to flow entirely within one country.

It drains one-fifth of the land area of the People’s Republic of China and its river basin is home to one-third of the country’s population (about 400 million people).

Rising in Tanggula Mountain , it flows eastwards and pours itself into the East China Sea.

Stretching from a land of remote mountains and arid plains, it winds its way through canyon gorges to fertile regions of connecting lakes and waterways.

Ocean-vessels are able to travel 1000 miles up the Yangtze River and smaller boats can travel much further.

As the largest water system in China, Yangtze River is historically, economically and culturally important to the country.

The Yangtze River's watershed (area of land drained by the river) is more than 695,000 square miles.

Although some sections of the Yangtze are protected nature reserves, pollution from agriculture and industry continues to be a problem affecting the water and its ecosystem.

A stretch of the Yangtze flowing through deep gorges in western Yunnan is part of the Three Parallel Rivers of Yunnan Protected Areas, a UNESCO World Heritage Site.

Tiger Leaping Gorge, on the Upper Yangtze, is the deepest gorge in the world, with mountains towering 4,000 meters (13,000 feet) above it, and steep 2,000 meters (6,600 feet) cliffs on its sides. It is part of the Three Parallel Rivers of Yunnan Protected Areas World Heritage Site.

The Yangtze River's source is Geladaindong Peak in the Tanggula Mountains in the Quinhai province in the People's Republic of China. This area is part of the Qinghai-Tibet Plateau.

The first big dam constructed on the Yangtze River was the Gezhouba Dam, in 1988. Three Gorges Dam was finished in 2009. It is a very large hydropower project and is also responsible for flood control.

Among the countless scenic sights, the Three Gorges is the most amazing landscape. It is one of the top ten scenic sights in China. It is classified as a AAAAA scenic area (the highest level) by the China National Tourism Administration.

When the Yangtze River first appeared on maps made by the English it was named Quian, and Quiansui - names given by Marco Polo.

The Yangtze River has been an important transportation route in China for over 2000 years with settlements along its banks dating back to the earliest human civilizations.

Many of China’s greatest cities lie along the Yangtze. Except for Shanghai – which was unimportant until the 19th century China trade made it one of the world’s great cities – all of these have existed for millennia. Listed from the mouth up the river, they are: Shanghai [pic. below] – great trading port, financial and fashion capital of modern China, Wuxi, Yangzhou, Zhenjiang, Nanjing – national capital under several dynasties and rivals Beijing for historical importance, Wuhan – important in 19th century trade and modern industry, Yichang – gateway to the Three Gorges, Chongqing – one of China’s largest cities.

The earliest evidence of human activity on the banks of the Yangtze River dates 27,000 years ago.

The river is home to 350 fish species (including the giant Yangtze Sturgeon), of which 112 are endemic. In the main channel of the upper Yangtze alone, there are 261 fish species, 44 of which are found only in this region.

The Yangtze River is home to the world's oldest existing dam-free irrigation system. It is called the Dujiangyan Irrigation Project and is located west of Chengdu City on Minjiang.

The most threatened crocodilian species in the world, the Chinese Alligator, is only found in the lower reaches of the Yangtze.

The Three Gorges Dam across the Yangtze River was officially opened in May of 2006. As of 2007, it is the largest hydroelectric river dam in the world.

The Yangtze River is called 'Chang Jiang' in Chinese, which means 'long river'. The lower part of the river had once only been referred to as Chang Jiang but eventually it became the name for the entire river.

The river is one of the world’s busiest waterways.

The Yangtze River Basin has some of the highest levels of biodiversity in the world—from towering mountains and dense forests to fertile wetlands and bustling waterways created by seasonal flooding.

The earliest irrigation project on Yangtze River is Dujiangyan Irrigation Project (built in 256 BC). Located on Minjiang, west to Chengdu City, it is the oldest and existing no-dam irrigation system in the world.

The earliest evidence of human activity on the banks of the Yangtze River dates 27,000 years ago.

The world’s highest railway, the Qinghai-Tibet Railway, passes only 100 kilometers (60 miles) from the source.