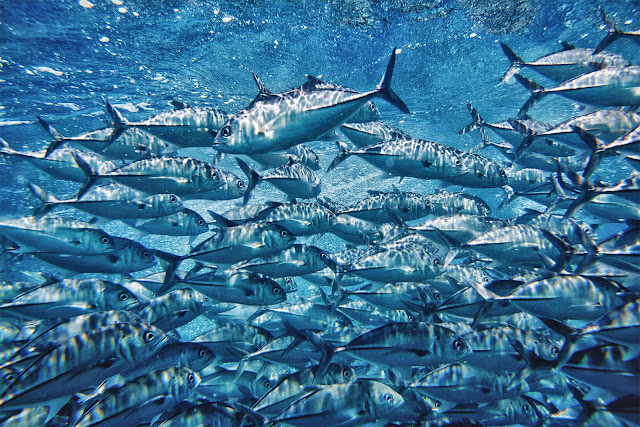 A tuna is a saltwater fish found in the ocean.

Tuna is a carnivore. It feeds on different types of fish (mackerel, herring, hake…), squids and crustaceans.

Unlike other fish, tuna is able to increase and maintain the body temperature few degrees above the temperature of surrounding water. Because of this feature, tuna can be classified as "warm-blooded" animal.

Tunas are widely but sparsely distributed throughout the oceans of the world, generally in tropical and temperate waters at latitudes ranging between about 45° north and south of the equator.

Tuna has unique network of small arteries and veins near the muscles called "rete mirabile" which facilitates warming of the blood. Warmed blood is essential for fast and strong swimming.

The lifespan of tunas varies by species, but ranges from about 15 years to over 40 years.

Tuna breathes oxygen from the water and because of that it needs to swim constantly.

Tunas can travel large distances in a short period of time. It can pass across entire Atlantic in 30 days by traveling 16 miles per hours.

Tuna can swim near the surface or can dive to the depth of 3000 feet while it searches for food.

Besides humans, natural predators of tunas are orcas and sharks.

Tunas vary considerably, both within and among species.

Mating season of tunas depends on their geographic location. Tunas in Gulf of Mexico mate from middle of April to middle of June. In Adriatic and Mediterranean Sea, mating takes place from June to August.

The blackfin tuna (Thunnus atlanticus) is the smallest tuna species, generally growing to a maximum of 100 cm (39 in) in length and weighing 21 kg (46 lbs).

During the spawning, one female can release 30 million eggs. Only 2 of those 30 millions will survive until the adulthood. Remaining eggs will be eaten by other marine creatures.

Average life span of tuna is between 15 and 30 years in the wild. Small percent of tuna managed to survive until this period.

Tuna is able to change the position of its dorsal and pectoral fins to reduce drag and accelerate the swimming speed.

Tunas are highly specialized migrating species. They swim continuously to counterbalance their negative buoyancy, travelling hundreds of kilometers / miles. This strategy has a high energy cost, forcing them to move in search of food and has resulted in morphological and physiological adaptations for thermoregulation and high oxygen extraction efficiency. Therefore, temperature and dissolved oxygen concentration affect tuna behavior significantly.

Tunas have a well-developed network of blood vessels below the skin that acts as a temperature-regulating device associated with long-term, slow swimming. Because of this vascular system, they are able to maintain the temperature of their bodies above that of the surrounding water, often between 5 and 12 °C (9 and 21.7 °F) above ambient water temperature.

An active and agile predator, the tuna has a sleek, streamlined body, and is among the fastest-swimming pelagic fish – the yellowfin tuna, for example, is capable of speeds of up to 75 km/h (47 mph).

Despite their large size, tunas are very fast swimmers. They can reach the speed between 44 and 62 miles per hour.

The tuna will swim near the surface of the ocean to look for food, however they can also dive to the depth of 900 meters (3000 feet) to search for their next meal.

At a young age, tunas eat tiny zooplankton, and their prey increases in size as they do. As adults, they eat different types of fish and invertebrates.

Dolphins swim beside several tuna species. Tuna schools are believed to associate themselves with dolphins for protection against sharks, which are tuna predators.

Tunas are among the most commercially valuable fish on the planet.

As a result of overfishing, stocks of some tuna species, such as the southern bluefin tuna, are close to extinction.

Also unlike most fish, which have white flesh, the muscle tissue of tuna ranges from pink to dark red.

The fresh or frozen flesh of tuna is widely regarded as a delicacy in most areas where it is shipped, being prepared in a variety of ways for the sake of achieving specific flavors or textures.

Tuna has many nutritious elements. It is an excellent source of selenium, vitamin B3 (niacin), vitamin B12, vitamin B6, and protein. Tuna is a very good source of phosphorus as well as a good source of vitamin B1 (thiamin), vitamin B2 (riboflavin), choline, vitamin D, and the minerals potassium, iodine, and magnesium. Some of the selenium is found in the form of selenoneine, which may be especially valuable in terms of its antioxidant properties. In addition, tuna provides valuable amounts of omega-3 fatty acids.

In the United States, 52% of canned tuna is used for sandwiches; 22% for salads; and 15% for casseroles and dried and pre-packaged meal kits such as General Mills’s Tuna Helper line.

Besides for edible purposes, many species of tuna are caught frequently as a game fish, often for recreation or for contests in which money is awarded depending on how heavy the fish weighs in at. Larger specimens are notorious for putting up a fight while hooked, and have been known to injure people who try to catch them, as well as damage their equipment.
Share This