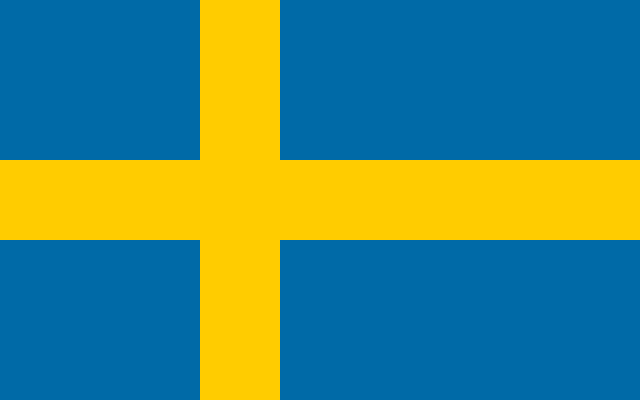 Sweden is officially called the Kingdom of Sweden.

Although Sweden is a neutral country and has not been involved in any war since 1814, Swedish citizens have to complete 15 months of military service if they are over 19 years of age.

Around 2,000 years ago, the Svear people gave Sweden its name. In their language, svear meant “us” and rike meant “kingdom.” So, Sverige, the modern Swedish name of the country, means “Our Kingdom.”

53% of Sweden is forested land.

The land area of Sweden is the 4th largest in Europe.

11% of Sweden is made up of mountains.

There are approximately 100,000 lakes in Sweden.

Swedish wasn’t made the official language of Sweden until 2009.

89% of people in Sweden speak English.

There are 9.7 million people in Sweden. 85% of them live in cities.

Sweden has the largest number of working mothers (by percentage) of any developed country in the world. This means that 76% of the mothers in Sweden work. Mothers and fathers are given 480 days off work when they have a baby.

The capital of Sweden, Stockholm, is also the country’s largest city, with more than 850,000 inhabitants.

The government system in Sweden is a constitutional monarchy and parliamentary democracy.

It is believed that Sweden will be the first country to replace petrol with biofuel.

Other large cities are Gothenburg, in western Sweden , and Malmö in the south. Uppsala and Lund are well-known university cities.

Sweden is home to the car companies Volvo and Saab.

Sweden shares a land border with it’s Scandinavian counterparts Finland and Norway, and is connected to Denmark by a bridge.

The famous furniture company IKEA was founded in Sweden in 1943, and has stores in many countries around the world.

Low unemployment, a low birth rate, a highly developed welfare system and one of the world’s longest life expectancies all contributes to modern Sweden having one of the highest standards of living in the world.

Forests cover over 50% of Sweden, there are also around 100,000 lakes and over 24,000 islands throughout the country. Sweden’s right to public access laws allows these areas to be fully accessible by the public.

The world's largest scale model of the Solar System is the Stockholm Globe Arena. It is also the largest hemispherical building in the world.

The main language spoken in Sweden is Swedish, with small minorities speaking Sami and Finnish.

Famous musicians and bands that have emerged from Sweden include ABBA, Ace of Base, and The Cardigans. Sweden follows the United States and the United Kingdom, making it the third largest exporter of music in the world.

Sweden is long – some 1,574 kilometers from top to bottom – and can be divided into three major regions: Götaland in the south, Svealand in the middle and Norrland in the north.

Many foods popular around the world originated in Sweden, including Swedish meatballs, which are usually served with gravy.

Between 300,000 and 400,000 moose (Alces alces) roam the Swedish woods. Over 100,000 are shot during the annual hunt, and about 250,000 people participate in the hunt. The moose is also considered the most dangerous animal in Sweden. Every year, they cause approximately 6,000 road accidents.

Sports that are popular in Sweden include ice hockey, soccer, handball, gymnastics, cross-country skiing and golf.

The monetary unit in Sweden is the krona.

There are 260,000 reindeer in Sweden. They eat mushrooms, lichen, grass, and herbs. Suovas is a word in the language of the indigenous Sámi people that refers to smoked reindeer meat fillets. Reindeer milk tastes sweet and looks like melted ice cream.

A traditional and famous dish of Sweden is Swedish meatballs, served with gravy, boiled potatoes and lingonberry jam.

The capital city of Sweden is Stockholm. This is also Sweden's largest city.

Sweden has about 20,000 Sámi living in the country today. Since 1993, this indigenous people have had their own parliament. In 2000, the Swedish government officially recognized Sámi as an official language.

The Swedish monarchy is one of the oldest in the world. It dates back a thousand years and has included 11 dynasties, with the current one, the House of Bernadotte, ruling the longest.

The Swedish Vikings of the 8th-10th centuries were a fearsome group, highly skilled at warfare they invaded and settled throughout Northern and Eastern Europe.

Sweden is the fourth largest European country, and the third largest in the European Union, following France and Spain.

During the 17th century Sweden again emerged as a great power in Europe with the Swedish Empire gaining territories in Eastern Europe.

While it was once a great military power. Sweden has remain neutral in all wars since 1814, including World Wars I and II. Despite the country’s peaceful nature Swedes over 19 years still have to complete up to 15 months of military service.

The northern lights, or aurora borealis, appear above the Arctic Circle (latitude 66°) and are visible around the equinoxes in late September and March and during the dark of winter in Sweden.

Sweden covers the eastern region of the Scandinavian Peninsula.

Sweden pays students US$187 per month to attend high school.

There’s a Golf Club on the border of Sweden and Finland: half the holes are in one country and half in the other.

Sweden has run out of trash so it’s importing garbage from Norway.

Every year since 1966, the town of Gavle, Sweden, erects a giant straw goat for Christmas, and almost every year, vandals burn it.

Absolut Vodka used to belong to Sweden’s government, until they sold it in 2008 for US$8.3 Billion to Pernod Ricard.

You can’t name your child “Ikea” or “Elvis” in Sweden.
Share This