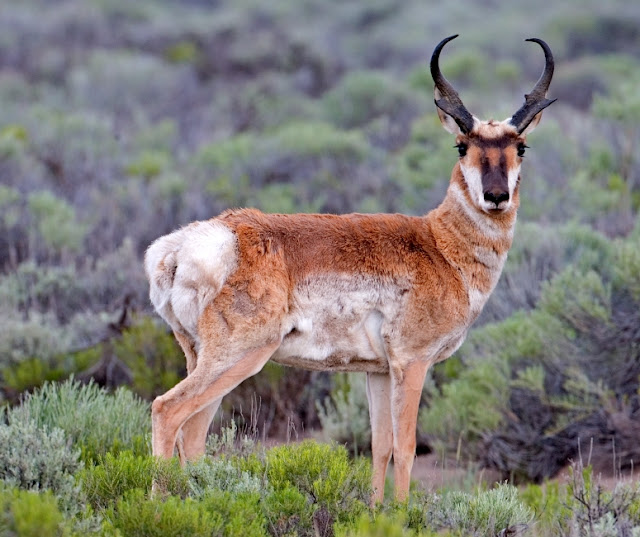 The pronghorn (Antilocapra americana) is a unique North American mammal.

Pronghorn returns food from the stomach back to the mouth and chew it several times before it becomes ready for intestinal digestion.

Though they’re colloquially called the “American antelope,” pronghorns aren’t related to antelope at all.

Pronghorn is the second fastest animal on the land (cheetah is the fastest). It can achieve speed of 53 miles per hour and run a mile and a half without slowing down.

The pronghorn is the only surviving member of the family Antilocapridae.

Main predators of pronghorns are coyotes, bobcats and wolves.

As a member of the superfamily Giraffoidea, the pronghorn’s closest living relatives are the giraffes and okapi.

The pronghorn is distributed throughout the treeless plains, basins, and deserts of western North America, from the southern prairie provinces of Canada, southward into the western United States and to northern Mexico.

Mating season takes place during the autumn. Male gathers females (form a harem) on his territory and defends them aggressively from other males.

Pronghorns are primarily found in grassland, sage scrub or chapparal, and desert. The southern portion of their range consists mainly of arid grasslands and open prairies. Throughout the rest of their range they are common in sage scrub and chaparral as well, areas of dense shrubs with tough leaves.

Female gives birth to one or two babies in the spring. Babies stay with their mother until they reach the age of one year. Young animals reach sexual maturity at the age of 16 months.

The lifespan of the pronghorns is about 10 years.

Pronghorns are active both during the day and night.

The horns of the pronghorn help make it unique: they are a cross between horns and antlers, with qualities of both. True antlers are made of bone and shed each year; true horns are made of compressed keratin that grows from a bony core and are never shed. The horns adorning the pronghorn are neither true horns nor true antlers. Instead, the sheath is made of keratin but the horns shed yearly.

True horns have only one point, not the prongs or forks that antlers have. Yet the male (buck) pronghorn’s horns can grow to be 10 inches (25 centimeters) long with a forward-facing prong. Hence its name: pronghorn. Female pronghorn (called does) also have horns, but they are much smaller. Pronghorn are the only animals in the world that have forked horns that shed each year!

Horns have bony base covered with layers of keratin and hairs that are shed annually after breeding season.

The running gait of the pronghorn is beautifully smooth and their powerful legs can carry them at a remarkable pace across the roughest kind of terrain.

The pronghorn is the fastest land mammal in the New World, being built for maximum predator evasion through running.

Pronghorns can change position of hairs on the skin. Straight up hairs ensure circulation of the air near the skin and elimination of excess body heat during the hot days. During the cold nights, hairs lie flat, close to the body to prevent loss of body heat.

It is often cited as the second-fastest land animal, second only to the cheetah. It can, however, sustain high speeds longer than cheetahs.

A pronghorn is both diurnal and nocturnal, meaning that it may be active in the day and at night. It may move up to 10 kilometers (6 miles) a day, and the male marks territory with its scent glands.

A pronghorn is very curious and has excellent eyesight and depth perception. It can spot slight movements up to 5 kilometers (3 miles) away.

Pronghorn have the largest eyes of any North American ungulate in relation to body size. Each eyeball is about 3,6 centimeters (1.4 inches) in diameter.
Pronghorns are reddish brown in color. They have white belly and white stripes on throat. Erected white hairs on the rump are used to inform other members of the group about potential danger. This patch of white fur can be seen miles away.

Pronghorns are mostly social animals. During winter, pronghorn form large mixed-sex and-age herds of up to 1,000 individuals. In spring, they split into smaller bands of females, bachelor groups of males between 1–5 years old, and solitary older males.

Mating season for pronghorn antelopes lasts from September through October. Males will fight over females. A male may mate with more than one female. The gestation period is about 250 days and births are synchronous, with all females giving birth within a few days of each other. Females give birth to one or two fawns in the spring.

Pronghorns are usually 3 feet tall and 3 to 5 feet long. They can reach from 90 to 150 pounds of weight. Males are heavier than females.

The newborns can take their first wobbly steps just 30 minutes after birth. At four days old, they can outrun humans, and in one week, they are able to run faster than a horse, if needed. The baby pronghorns depend on their mothers’ milk until they attain the age of weaning at 4 or 5 months.

Nearly exterminated in the late 19th century, pronghorns have returned to great abundance with the help of dedicated conservation efforts.

The protection of habitat and hunting restrictions have allowed pronghorn numbers to recover to an estimated population between 500,000 and 1,000,000.
Share This