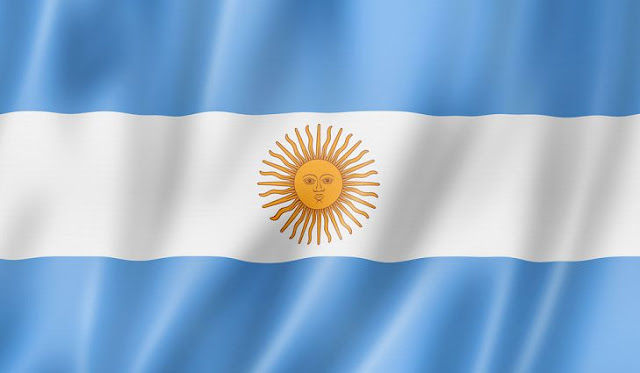 Argentina is a massive South American nation with terrain encompassing Andes mountains, glacial lakes and Pampas grassland, the traditional grazing ground of its famed beef cattle. The country is known for tango, steak and football.

The monetary unite in Argentina is the peso.

The official name is the Argentine Republic.

Bordered by the Andes in the west and the South Atlantic Ocean to the east, neighboring countries are Chile to the west, Bolivia and Paraguay to the north, and Brazil and Uruguay to the northeast.

The city of Ushuaia in Argentina is the most southern city in the world.

With a mainland area of 2,780,400 square kilometers (1,073,500 sq mi), Argentina is the eighth-largest country in the world, the second-largest in Latin America.

Buenos Aires is the capital and largest city of the Argentine Republic. It is known for its European atmosphere, passionate tango and vibrant nightlife.

Argentina is divided into four topographical regions: the Andean region, Patagonia, the subtropical plain of the north, and the pampas.

Argentina’s highest point is Aconcagua at 6,959 meters (22,831 feet) above sea level. It is also the highest point in the Southern and Western Hemispheres.

The Argentine coastline measures about 4,990 kilometers (3100 miles) in length.

There are over 30 national parks in Argentina and 9 UNESCO World Heritage Sites.

Los Glaciares National Park covers an area of 7,269.27 square kilometers (2,806.68 square miles), making it the largest national park in the country. In 1981 it was declared a World Heritage Site by UNESCO.

Located in Los Glaciares National Park, Monte Fitz Roy is one of the most iconic points in the Andes. This granite mountain is surrounded by glacial lakes and dramatic ice fields.

The Perito Moreno Glacier in Los Glaciares National Park is the third largest reserve of freshwater in the world and one of only three glaciers in Argentina that is growing, not shrinking.

There are approximately 13.5 million people in Argentina using the internet.

Approximately one out of every thirty people in Argentina has plastic surgery to enhance their appearance. Many tourists also choose Argentina for plastic surgery procedures as well because it is cheaper there.

One of the most spectacular natural landmarks of Argentina, the Talampaya Canyon is located in the national park with the same name. It was designated a provincial reserve in 1975, a national park in 1997, and a UNESCO World Heritage Site in 2000.

The first time in history that fingerprints were used to convict a person of a crime was in 1892 in Buenos Aires, Argentina.

The remains of many gigantic dinosaurs have been found in the last 10 years. The Giganotosaurus, believed to have lived 90 to 112 years ago, was found in Argentina. It looked similar to the T. rex but it was much larger. It also had three fingers instead of two.

The exquisite Iguazu Falls are also known as the Iguassu Falls and the Iguaçu Falls. The magnificent spectacle of these 275 individual drops has awed tourists, locals and indigenous inhabitants for centuries.

Argentina claims to have invented the dance the tango.

Cueva de las Manos (Spanish for Cave of Hands) is famous for the paintings of hands. The art in the cave dates from 13,000 to 9,000 years ago. It was entered on the UNESCO World Heritage List in 1991.

Argentina declared its independence from Spain on July 9th, 1816 and adopted its current constitution on May 1st, 1853.

San Ignacio Miní was one of the many missions founded in 1632 by the Jesuits in what the Spanish called the Province of Paraguay in the Americas during the Spanish colonial period. It is located near present-day San Ignacio valley, some 60 km north of Posadas, Misiones Province, Argentina. It was entered on the UNESCO World Heritage List in 1984.

Argentina has claims to part of Antarctica, the South Sandwich Islands, South Georgia, and the Falkland Islands.

The name “Argentina” comes from the Latin word for silver, argentum. The original European settlers believed the country was full of silver.

Tango, a distinctive dance and the corresponding musical style of tango music, began in the working-class port neighborhoods of Buenos Aires.

Argentina is the largest Spanish-speaking country in the world.

Argentines like to kiss. They almost always greet each other with a kiss on the check, even among men.

Argentina has more psychologists per capita than anywhere else in the world.

Argentine beef is famous around the world and Asado (an Argentine barbecue) is very popular in the country which has the highest consumption of red meat in the world.

The Argentine city of Ushuaia is the southernmost city in the world.

July 9 Avenue, located in the city of Buenos Aires, Argentina, is the widest avenue in the world, with 14 lanes, plus 4 lanes of parallel streets.

Argentina's capital city is Buenos Aires, with a population of almost 13 million people.

Argentina is said to have the highest infidelity rate in all of South America. Divorce has been legal in the
country since 1987, and now the country has the highest divorce rate as well.

The national sport of Argentina is Pato a game played on horseback. It takes aspects from polo and basketball. The word Pato is Spanish for ‘duck’ as early games used a live duck inside a basket instead of a ball.

The most popular sport in Argentina is football, the Argentine national team has won the football World Cup twice in 1978 and 1986.

The Iglesia Maradoniana is a religion, created by fans of the retired Argentine football player Diego Maradona, who they believe to be the best player of all time.

The population of Argentina in 2012 was more than 42 million people.

Government officials in Lionel Messi’s hometown in Argentina have banned parents from naming their children “Messi.”

In 1971, the embalmed body of Evita Perón was exhumed and flown to Spain, where her husband and ex-president of Argentina, Juan Perón, and his new wife Isabelita kept it in their dining room until he died in 1974.

The major figure of the Cuban Revolution, Ernesto “Che” Guevara, was born in Argentina.

Before becoming the Pontiff, Pope Francis I was a nightclub bouncer in Buenos Aires, Argentina.

A 3-year-long College Major in Exorcism is offered at a Lutheran Parish in Argentina.

Pedro Martin Ureta, a heartbroken Argentine farmer, spent decades cultivating a guitar-shaped forest to honor his late wife, who died tragically at the age of 25.

One of the five best opera and classical concert venues of the world is located in Argentina. It is called Teatro Colon.

In 1977, Argentina sent a pregnant mother to Antarctica in an effort to claim a portion of the continent. The boy (born 7 January 1978) became the first human known to be born in Antarctica.

The toothpaste “Colgate” in Argentine Spanish translates to “Go Hang Yourself.”

In Argentina, political parties have their own brands of beer.

There is a Welsh-speaking part of Argentina and it has its own dialect of Welsh.

Yerba Mate is the national drink of Argentina. It is a type of tea made from the young leaves of the Brazilian holly, an evergreen tree of the holly family. It is drunk from a gourd or bowl through a metal straw called a bombilla.