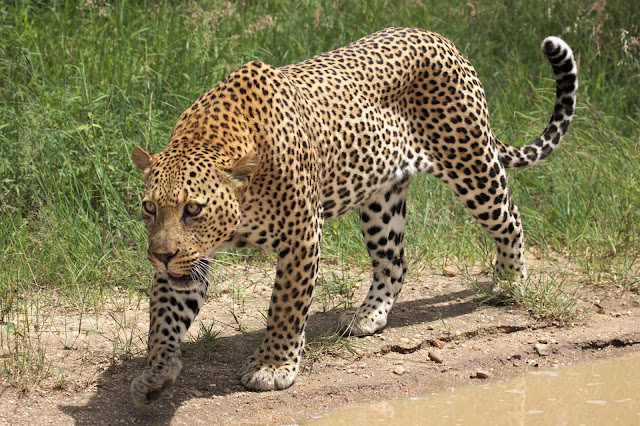 Leopards are part of the cat family, Felidae. The scientific name for a leopard is Panthera pardus.

The lifespan of a leopard is between 12 and 17 years in the wild, and up to 23 years in captivity.

Leopards are well known for their cream and gold spotted fur, but some leopards have black fur with dark spots.

Leopards are carnivores, but they aren’t picky eaters. They will prey on any animal that comes across their path, such as Thomson’s gazelles, cheetah cubs, baboons, rodents, monkeys, snakes, large birds, amphibians, fish, antelopes, warthogs and porcupines.

Leopards are renowned for their agility. They run up to 58 km/h (36 mph) and can leap 6 meters (20 feet) horizontally and 3 meters (10 feet) vertically. They are also very strong swimmers.

Leopard cats have slightly webbed toes which facilitate swimming and movement on the slippery ground. These cats are also excellent climbers.

Leopard cats can survive up to 13 years in the captivity.

Adult leopards are solitary animals. Each adult leopard has its own territory where it lives and, although they often share parts of it, they try to avoid one another.

Leopard cats are solitary creatures except during the mating season which takes place from March to April in the northern parts. Leopard cats that inhabit areas with warm climate can reproduce all year round.

They are able to climb trees, even when carrying heavy prey, and often choose to rest on tree branches during the day. One reason why leopards sometimes take their prey up in the trees is to ensure lions or hyenas can’t steal them.

Pregnancy in females lasts 60 to 70 days and ends with 2 to 4 kittens. Babies are blind and helpless at birth. They spend first few weeks of their life in the hidden den.

The leopard is the most elusive and secretive of the large felids. They are extremely difficult to trace and locate in the wild.

When female leopards are ready to mate they will mate with many of the dominate males near her territory. This takes away the risk of the cubs being killed by one of the rival dominate males because they will think that the cubs are theirs.

Leopards have a gestation period of approximately 3 months and typically give birth to a litter of 2 to 3 cubs.

Color of the fur depends on the geographic region. It can be yellowish-brown (southern populations) or silver-grey (northern populations). Leopard cats are covered with black spots, arranged in the form of rosettes (like in leopards) or scattered all over the body. Throat and belly are white colored. Tail is covered with several black bands and it ends with black tip.

Leopard cubs are born blind and are completely dependent on their mothers. Their eyes begin to open after about ten or more days and for the first few months their eyes are bright blue.

Leopard cubs will stay with their mothers for approximately two years, this is how they learn to hunt and survive on their own.

Leopard cats reach sexual maturity at the age of 18 months.

The name “leopard” comes from the Greek word leopardus, which is a combination of leon (lion) and pardus (panther).

Leopards don’t need much water. They survive from the moisture they get from eating their prey.

Unlike other cat species, males participate in rearing of kittens.

The leopard’s spots are called rosettes because they look like roses.

The leopard is listed as vulnerable on the IUCN Red List because leopard populations are threatened by habitat loss and fragmentation, and are declining in large parts of the global range.

Throughout history, leopards have been depicted in artwork, mythology and folklore in numerous countries. They are also now commonly used as an emblem in sports in much of Africa.

Leopard cats are carnivores. Their diet consists mainly of rodents, shrews, hares, birds, fish, amphibians, reptiles and eggs. They hunt both on the ground and in the trees.

Young leopard cats are ready to eat solid food at the age of 4 weeks, but they stay with their parents until the age of 8 to 10 months.

Some people believe that the bones and whiskers of leopards can heal sick people. Many leopards are killed each year for their fur and body parts and this is one reason why the leopard is an endangered animal. While they were previously found in the wild in a number of areas around the world, their habitat is largely restricted to sub-Saharan Africa with small numbers also found in India, Pakistan, Malaysia, China and Indochina.
Share This