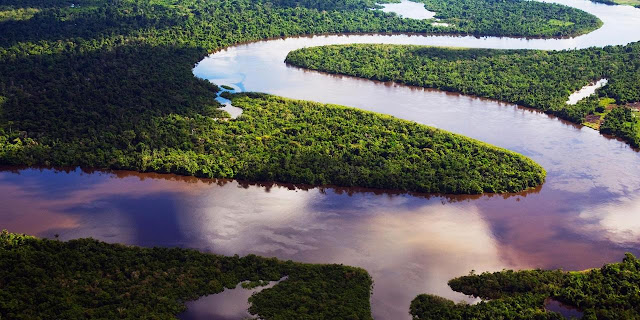 The River Amazon in South America is the largest river by discharge of water in the world, and the second in length.

When rainy season arrives in South America the width of the Amazon River can reach 120 miles in width.

The river originates from the Andes mountains in the Peru.

It runs through Ecuador, Venezuela, Bolivia, Brazil, Colombia and Peru.

The length of the Amazon River is approximately 6400 kilometers (4000 miles).

The Amazon is the widest river of the world. The width of the Amazon is between 1.6 and 10 kilometers (1.0 and 6.2 miles) at low stage, but expands during the wet season to 48 kilometers (30 miles) or more.

The Amazon River serves as the main transportation route for produce and people in the regions it flows through.

The Amazon River is second in length to the Nile River in Africa. The Nile is the longest river in the world.

The Amazon basin is the largest drainage basin in the world, with an area of approximately 7,050,000 square kilometers (2,720,000 square miles), and accounts for roughly one-fifth of the world’s total river flow.

The source of the Amazon River is believed to be Lago Villafro in Peru's Andes Mountains.

Although the Amazon River is the second longest river in the world, it carries the most water of any river worldwide.

Marajó, the world’s largest river island with an area of 48,000 square kilometers (18,533 square miles) is located on Amazon and is about the size of Switzerland.

The Amazon rainforest is the largest in the world and it surrounds and is supported by the river.

The Amazon River is credited with flowing 20% of the Earth’s fresh water into the Atlantic Ocean.

This fresh water brought by Amazon River dilutes the salinity and changes the color of the ocean’s surface over an area of 2,600,000 square kilometers (1,003,865 square miles).

Amazon dumps directly into the turbulent Atlantic. Because of the high tidal energy and the strong waves, sediments from Amazon flow out into the open ocean and thus, Amazon never really forms a true delta.

There are more than 1,100 known tributaries flowing into the Amazon River. Tributaries are sources of water such as a small river, stream or other water flow that reaches the river.

Because of its vast dimensions, it is sometimes called “The River Sea“.

At least 17 tributaries flowing into the Amazon River are 1500 km in length.

Martin Strel swam the length of the Amazon River in 2007, taking 66 days of 10 hours in the water each day to complete his mission.

There are over 5,600 known species of fish that live in the Amazon River, with more constantly being discovered.

The river is also known for supporting turtles, snakes, algae and crabs.

The bull shark has been reported 4,000 kilometers (2,500 miles) up the Amazon River at Iquitos in Peru.

You will need an Amazon River Map to navigate this terrain.

Amazon River is the prime habitat of the Boto, which is the largest species of river dolphin and is also known as the Amazon River Dolphin.

There are believed to anywhere from 400 to 500 tribes of native South Americans living along the Amazon River's rainforest. It is believed that many of these tribes (as many as 50 or more) have never come into contact with outsiders.

Manaus, Brazil is the largest city located along the Amazon River, with a population of approximately 1.7 million people.

The tucuxi, also a dolphin species, is found both in the rivers of the Amazon basin and in the coastal waters of South America.

The Amazonian manatee, also known as “seacow“, is found in the northern Amazon River Basin and its tributaries.

One of the largest freshwater fish in the world is found living in the waters of the Amazon River. Arapaima, also known locally as Pirarucu, have been found to reach a length of 4 meters (15 feet) and can weigh up to 200 kilograms (440 pounds).

There are at least 3000 different species of fish living in the Amazon River. New species are constantly being discovered.

Also present in large numbers is the notorious piranha, an omnivorous fish that congregates in large schools and may attack livestock and even humans. There are approximately 30 to 60 species of piranha. However, only a few of its species are known to attack humans.

The Amazon River is home to the piranha - a fish that is known to swarm and devour livestock that wanders into the water. Their teeth are razor sharp and they are carnivores by nature. Contrary to many 'big fish' stories, there are no known cases of piranha eating humans.

Anacondas lurk in the shallow waters of the Amazon Basin, they are one of the largest snakes in the world and occasionally attack larger animals such as goats that get to close the water.

The Amazon got its name from the brave women warriors of the Greek mythology who were known by the name of Amazons.

The Spanish soldier, Francisco de Orellana, who was first European to explore the Amazon, in 1541, gave the river its name after reporting pitched battles with tribes of female warriors, whom he likened to the Amazons of Greek mythology.

The Amazon River had no bridges until one was built at Manaus in 2011 mostly because there is no need, the majority of the Amazon River runs through rainforests rather than roads or cities.Also in some places the crossing can be done by a ferry.

The largest city along the Amazon River is Manaus.Located in Brazil it is home to around 1.9 million people.

In 2007, a man named Martin Strel swam the entire length of the Amazon river! To complete his splashing jungle journey, Martin powered through the water for up to ten hours a day for 66 days.

The Amazon River is home to one of the world's largest snakes - the anaconda. They grow so large that they have been known to consume large animals such as goats, as well as small humans when the opportunity arises. The anacondas tend to live in shallow Amazon Basin waters.