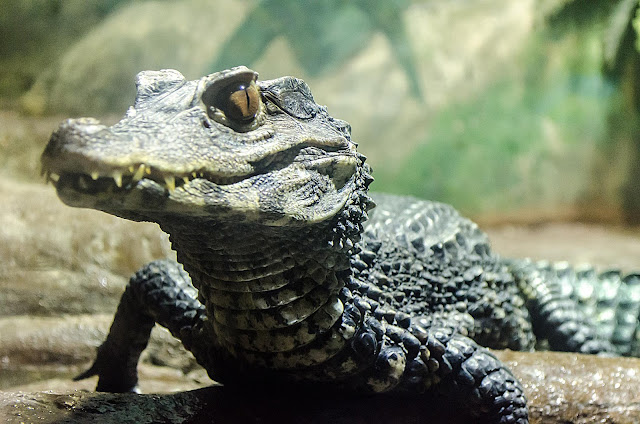 Though often confused with various crocodile species, the American alligator can be distinguished by its rounded snout, and by the fact that when the jaws are closed, none of the lower teeth are visible. The body is armoured with thick scales, and bears a long, powerful tail, as well as sturdy limbs with webbed toes, which help to propel this species through the water. The eyes and snout are positioned on the top of the head, enabling the American alligator to breathe and watch for prey, while the rest of the body is submerged.

Alligators have extremely strong jaw muscles, which enable them to bite and grip their prey.

The eyes of a large alligator will glow red and those of a smaller will glow green when a light is shined on them. This fact can be used to find alligators in the dark.

Alligators are reptiles, that belong to the order Crocodilia.

Large male alligators are solitary, territorial reptiles. Smaller alligators can often be found in large numbers in close proximity to each other. The largest of the species (both males and females), will defend prime territory whereas smaller alligators have a higher tolerance of other alligators within a similar size class.

The mating season is in late spring. In April and May, alligators form so-called “bellowing choruses”. Large groups of animals bellow together for a few minutes a few times a day, usually one to three hours after sunrise.

In summer, the female builds a nest of vegetation where the decomposition of the vegetation provides the heat needed to incubate the eggs. The sex of the offspring is determined by the temperature in the nest and is fixed within seven to 21 days of the start of incubation. Incubation temperatures of 30 °C (86 °F) or lower produce a clutch of females; those of 93 °F (34 °C) or higher produce entirely males.

Adult alligators are black or dark olive-brown with white undersides, while juveniles have strongly contrasting white or yellow marks which fade with age.

The name “alligator” is probably an anglicized form of el lagarto, the Spanish term for “the lizard”, which early Spanish explorers and settlers in Florida called the alligator.

Alligator has massive body, strong legs and long, powerful tail. It has wide, rounded, U-shaped snout, unlike crocodile which has pointed, V-shaped snout. Teeth of an alligator are not visible when the jaws are closed, while teeth of a crocodile are always exposed (even with closed jaws).

Alligator is a carnivore. Its diet is based on fish, mollusks, reptiles (including immature alligators), mammals and birds. Meat-based diet is occasionally supplemented with fruit.

Alligator has one of the strongest bites in the world, but it has very weak muscles responsible for opening of jaws. That's why piece of duct tape or pair of human hands can keep alligator's mouth closed.

Alligator climbs on the trees and fences with ease.

Newly hatched young are very vulnerable. Their mother protects them from predators, which include raccoons, bobcats, birds, and even other alligators. The young alligators stay with their mother for about a year.

The average lifespan of an alligator is about 50 years in the wild.

The Chinese alligator is considered endangered by the International Union for Conservation of Nature and Natural Resources (IUCN).

In 1999, it was estimated by the Wildlife Conservation Society that there were only around 150 individuals left in the wild. This coincided with a reversal of its decline in the wild, the population stabilizing between 1998 and 2003, followed by a slow and ongoing increase.

Smaller alligators often live in groups called congregations, while very large alligators (of both gender) live solitary and defend their territories from other alligators.

Alligator regularly basks in the sun to increase its body temperature (to warm its blood and increase motility).
Mating season of alligators takes place in June. Males usually mate with several females per season, while females often remain faithful to a single partner (they mate with him from year to year).

Females lay 10 to 50 hard-shelled eggs in the nests made of mud, sticks and vegetation and cover them with debris for protection.

Alligators are nocturnal creatures, which means they are more active at night. Primarily they do their hunting during this time as well; usually around dusk or sometime during the night. They carry out the process of hunting by laying motionless and waiting for their prey.

Alligators are opportunistic feeders, eating almost anything they can catch. When young, alligators eat fish, insects, snails, crustaceans, and worms. As they mature, progressively larger prey is taken, including larger fish such as gar, turtles, and various mammals, particularly coypu and muskrat, as well as birds, deer, and other reptiles. Their stomachs also often contain gizzard stones.

Temperature in the nest determines the gender of the babies. Temperature below 28 degrees of Celsius leads to development of girls.

Female guards her nest and removes debris from the surface of eggs at the time of hatching. Babies can find food on their own from the moment of birth.

At the age of 2 years, young alligators are ready to leave their mother and start to reproduce.

The Chinese alligator has 72-76 teeth, whereas the American alligator has 74-80 teeth. Alligators are polyphyodonts (animal whose teeth are continuously replaced). An alligator can go through 3,000 teeth in a lifetime.

American alligators are found in the southeast United States: all of Florida and Louisiana; the southern parts of Georgia, Alabama, and Mississippi; coastal South and North Carolina; East Texas, the southeast corner of Oklahoma, and the southern tip of Arkansas. They are usually found in freshwater, slow-moving rivers. They are also found in swamps, marshes, and lakes.

Lifespan of alligator is unknown. Oldest known alligator has 76 years and it is still alive.

Alligators are native to only the United States and China.