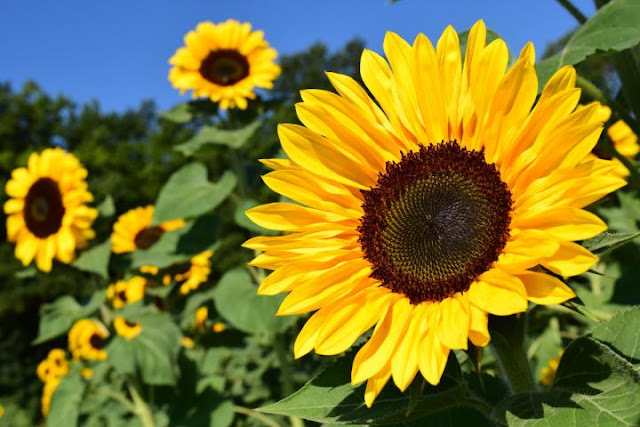 Sunflowers originally came from the U.S.

Sunflowers are the state flower for Kansas.

The scientific name of sunflowers is Helianthus, from the Greek word helios for sun and anthus meaning flower.

Sunflower needs a lot of sun and follows the sun’s movements across the sky from east to west, this phenomenon is called heliotropism.

There are two kinds of sunflower seeds- black and stripe

Each sunflower is actually made of thousands of teeny flowers called florets. The iconic yellow petals and fuzzy brown centers are actually individual flowers themselves. As many as 2000 can make up the classic sunflower bloom.

Sunflowers are a great choice for planting to attract birds to your yard.

Sunflower heads consist of 1,000 to 2,000 individual flowers joined together by a receptacle base. The large petals around the edge of a sunflower head are individual ray flowers which do not develop into seed.

There are two kinds of sunflower seeds. Oil is made from black seeds and snacks are made from striped seeds. Sunflower seeds are also used to feed birds.

Sunflowers have been cultivated and harvested by many cultures for at least 4,500 years.

The sunflower is native to the America’s and was used extensively by Native American Indians for food, as oil, in bread, medical ointments, dyes and body paints.

There is only one flower on each sunflower stem.

Sunflowers are one of the fastest growing plants. They can grow 8 to 12 feet tall in rich soil within six months.

The sunflower is native to North America and was used by the Indians for food and oil. Some farmers use it to feed their livestock.

We use sunflower seeds to make oil, bird seed and for snacking. They have lots of calcium and 11 other important minerals. They do have 50% fat, BUT it is mostly polyunsaturated linoleic acid.

Vincent Van Gogh did a series of paintings featuring and called Sunflowers.

Sunflowers have been planted to help soak up nuclear radiation. They can extract toxin such as lead, arsenic and uranium from contaminated soil.

Tsar Peter the Great was so fascinated by the sunny flowers he saw in the Netherlands that he took some back to Russia.

The former Soviet Union grows the most sunflowers. The sunflower is the national flower of Russia.

A well-known sunflower characteristic is that the flowering heads track the sun's movement, a phenomenon known as heliotropism.

It require only 90 to 100 days from planting to maturity.

The sunflower is the national flower of Russia.

The largest gathering of people dressed as sunflowers consists of 748 people achieved by Karnevalsgesellschaft “Bleib treu” (Germany) in Boke, Germany, on 14 May 2015.

The daily orientation of the flower to the sun is a direct result of differential growth of the stem. A plant-growth regulator, or auxin, accumulates on the shaded side of a plant when conditions of unequal light prevail. Because of this accumulation, the darker side grows faster than the sunlit side. Thus, the stem bends toward the sun.

There are more than sixty different kinds of sunflowers in the U.S.