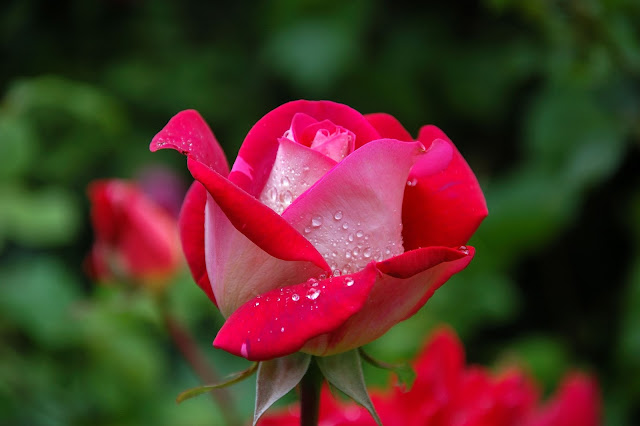 The rose is a type of flowering shrub that belong to the family of plants called Rosaceae.

Roses can survive long period of time. Rose that covers the wall of the Cathedral of Hildesheim in Germany has over 1000 years.

Roses are native primarily to the temperate regions of the Northern Hemisphere.

All roses were originally wild and they come from several parts of the world, North America, Europe, northwest Africa and many parts of Asia and Oceania.

There are 100 different species of roses.

Roses are often used in literature and songs. There are over 4000 songs dedicated to roses.

The flowers of most species of rose have five petals except for the species ‘Rosa sericea‘ which has only four.

Roses are old plants. One of the oldest fossils of roses discovered in Colorado dates back from 35 million years ago.

Large number of petals is a result of mutation and it can be seen in cultivated roses.

The cultivation of roses most likely began in Asia around 5000 years ago.

There are approximately 13,000 identifiable varieties of roses throughout the world.

Rose oil is important ingredient in the perfume industry. Extraction of minimal amount of this oil requires huge amount of roses (one gram of oil is produced from two thousand roses).

Most roses are deciduous but a few (particularly from South east Asia) are evergreen or nearly so.

Rose is the most popular flower in the world followed by other flowers such as Chrysanthemums, Tulips, Lilies, Poinsettias, Narcissus etc.

Color of the rose depends on the species. Roses can be found in different shades of white, yellow, pink,
burgundy, violet, orange and red colors. Blue and black roses do not exist. A “black rose” is not actually black it is very dark red. And to make blue roses, it is necessary to borrow the delphindin gene from another kind of flower and splice it into the genes of the rose.

Rose water and rose syrup are used in cooking. Rose hip can be turned into jams, marmalades or it can be dried and used in the preparation of tea.

Each color of the rose symbolizes certain value. Red rose is a symbol of love, yellow of friendship, orange of enthusiasm, white of purity, pink of joy, burgundy of beauty and violet of royalty.

We usually call the sharp spikes on the stem of a rose bush “thorns“. But these are in fact technically
prickles.They look like hooks which facilitate bonding to the other plants (in the climber types of roses) and protects stem from herbivores.

Rose hip is a fruit of rose. It is rich source of vitamin C. Rose is sometimes used in folk medicine to relieve stomach pain and to treat cancer.

Roses can survive for extremely long periods of time.The Thousand-year Rose grows on a wall of the Hildesheim Cathedral, a Catholic cathedral in Hildesheim, Germany, that is dedicated to the Assumption of Mary. It is believed to be the oldest living rose in the world.

Wild roses bloom once per year. They are pollinated by insects.

During the Roman period, roses were grown extensively in the Middle East. They were used as confetti at celebrations, for medicinal purposes, and as a source of perfume. Roman nobility established large public rose gardens in the south of Rome.

The famous Cleopatra of Egypt was believed to have covered the floor of her palace room with roses before Mark Antony visited her.

During the fifteenth century, the factions fighting to control England used the rose as a symbol. The white rose represented York, and the red rose symbolised Lancaster. Not surprisingly, the conflict between these factions became known as the “War of the Roses“.

It wasn’t until the late 18th century that cultivated roses were introduced into Europe from China.

Even though prickles are strong and sharp, certain species of deer are able to eat roses.

In Greek Mythology, Aphrodite, the Goddess of Love, is said to have created the rose from the tears she cried over the blood of her beloved, Adonis. The Romans turned Aphrodite into their goddess Venus, who also adopted the rose as significant.

Rose oil is an important ingredient in the perfume industry. Extraction of minimal amount of this oil requires huge amount of roses (one gram of oil is produced from two thousand roses). The nice scent of the rose comes from microscopic perfume glands on the petals.

Wild roses have 5 petals and 5 sepals. Large number of petals is a result of mutation and it can be seen in cultivated roses.

The Rose Valley in Bulgaria is famous for its rose-growing industry which have been cultivated there for centuries, and which produces 85% of the world’s rose oil.

Each color of the rose symbolizes certain value. Red rose is a symbol of love, yellow of friendship, orange of enthusiasm, white of purity and pink of joy.

The world’s largest rosebush is of the Lady Banksia variety. The rosebush’s canopy measures 790 square meters (8,500 square feet), its trunk has a circumference of around 3.6 meters (12 feet).It was planted in Tombstone, Arizona, in 1885.

Color of the rose depends on the species. Roses can be found in different shades of white, yellow, pink, orange and red colors. Blue and black roses do not exist.

The Rainbow Rose is a genuine rose with highly attractive colors. Each rose petal has one of the colors of the rainbow. And so, with her seven different colors, this rose sets the imagination on fire.

Most species of roses are deciduous, with few species that belong to the group of evergreen plants. Majority of roses form bushes or grow by climbing over other vegetation.

Juliet rose is known as the “£3 million rose” ($4.37 million) because that’s how much it cost famed rose breeder David Austin to create the apricot-hued hybrid over the course of 15 years. It debuted in 2006 at the Chelsea Flower Show, and took the floral world by storm not only for its blushing beauty, but because it was the most expensive rose ever developed.

Size of rose depends on the species. Flower can reach from couple to 33 inches in diameter. Certain species can reach 23 feet in length.

Many species, particularly the rugosa rose (R. rugosa), produce edible rose hips, which are a rich source of vitamin C and are sometimes made into jam, jelly, or brewed for tea.

The leading country in exporting roses is Holland or the Netherlands. They use 8000 hectares (19,768 acres) of land to cultivate roses.

Compared to other rose colors, the one which counts the high sales is none other than “Red Roses”

In 2002, the miniature rose, named the “Overnight Scentsation”, journeyed to space to aid in studies regarding the effects of low gravity on the smell of the rose, and to learn how to improve the fragrances of many consumer products.

One of the oldest fossils of roses discovered in Colorado dates back from 35 million years ago.

Only 3 flowers are mentioned by name in the Bible and the rose is one of them.

Roses are a favored subject in art and appear in portraits, illustrations, on stamps, as ornaments or as architectural elements.

There are over 4000 songs dedicated to roses.
Share This