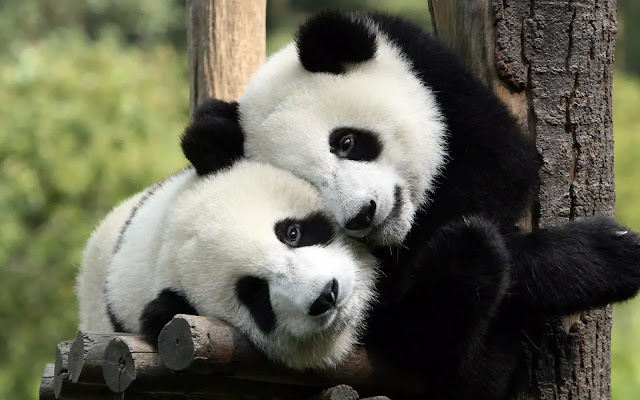 The giant panda, also known as panda bear or simply panda, is a bear that live in a few mountain ranges in central China.

Pandas will begin to climb the trees at very young age (before their first birthday). They will become proficient in time.

The average panda’s home range is thought to be about 5 square kilometers (1.9 square miles), with male ranges larger than that of females.

The giant panda is a national treasure in China and is therefore protected by law in its bamboo forest home.

Pandas are by nature solitary animals, for most of the time avoiding direct contact with others of their own kind.

The giant panda’s black and white coat and prominent black eye patches have made it one of the best known species, although it is among the shyest and rarest animals in the world.

Females ovulate once per year and have just a couple of days to make a baby. After mating is completed, female will chase the male from her territory.

Panda uses 11 different sounds to communicate. Four of them are used during a mating season.

Due to their large size, panda don't have natural enemies. Only small cubs and old pandas can be potential meal of the snow leopard.

But bamboo is so low in nutrients so they spend at least 12 hours each day eating it.

Giant pandas have a slow reproductive rate: mature females usually breed just once every 2 or 3 years. In the wild, a typical female panda may bear about 5 litters in her lifetime.

The panda mother gives great care to her tiny cub, usually cradling it in one paw and holding it close to her chest. For several days after birth, the mother does not leave the den, not even to eat or drink!

A cub has pink skin, a thin coat of white fur, a long tail, and no teeth. Its eyes are closed. By the end of the first month, the baby panda has all of its spots. Its eyes open around 4 to 6 weeks and teeth appear around 14 weeks. Than mother and cub spend much less time using their den.

Panda can peel and eat bamboo stick in 40 seconds. They sit during the meal.

Scientists are not sure why panda's fur is colored in such a unique way. Color of the skin is specific also. Skin is black under the black fur and pink under the white fur.

Cubs stay with their mothers for 18 months before venturing off on their own!

In the wild panda lives around 20 years. In captivity, panda may live 25-30 years.

Pandas don’t roar like brown bear. They make sounds similar to the sound a lamb or a goat kid would make, and it’s a friendly sound, a greeting. They also honks, barks, huffs, and growls.

Panda researchers have counted 11 different panda calls—and four of them are used only when searching for a mate.

Unlike most other bears, pandas do not hibernate. When winter approaches, they head lower down their mountain homes to warmer temperatures, where they continue to chomp away on bamboo!

A group of pandas is called an “embarrassment.”

For years scientists have wondered whether pandas are a type of bear, raccoon, or something all their own. Through studying the genetic code (DNA) in pandas’ cells, scientists have confirmed the panda’s relationship with bears.

The West first learned of the giant panda in 1869, when a French missionary received a skin from a hunter.

Around 240 pandas in the world live in captivity. Pandas are the most expensive zoo animals. They are 5 times more expensive than elephants, because of the huge amount of bamboo they demand on a daily basis.

The latest census in 2014 found that there were 1,864 giant pandas alive in the wild.

Panda is a symbol of peace in China. During the battles in the past, Chinese would raise a flags with panda if they wanted to call a truce or to stop a battle. Panda is also a symbol of the World Wide Fund for Nature (WWF), international agency that works on the protection of endangered animals.
While still very low, this represents a real success story, with numbers increasing from around 1,000 in the late 1970s.

All pandas in the world are on loan from China, and when a baby Panda is born, by agreement, it is sent back to China to help expand the gene pool.

Panda researchers have to wear panda costumes to work with cubs.

When it is born, panda cub weighs only 5 ounces. Mother is 900 times heavier than the cub and it can crush the cub accidentally.

One of the reasons the World Wildlife Fund chose the Panda as their logo was to save printing costs.

Fossils have been found showing that giant panda bears evolved somewhere between 2 and 3 million years ago.

Female take care of cub on her own. Usually one baby is born. In the case of twins, mother will ignore weaker cub due to lack of energy needed for care of two babies.

The giant panda’s scientific name is Ailuropoda melanoleuca, which means ‘black and white cat-foot‘.
Share This