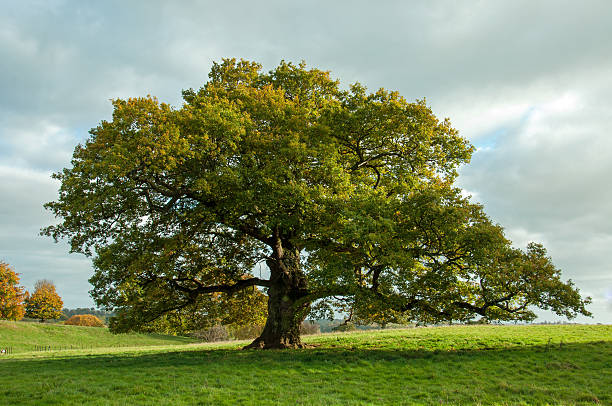 Oak belongs to the genus Quercus of the beech, or Fagaceae, family.

There are approximately 600 extant species of oaks.

One of the oldest Britain's coins (six pence) has an oak engraved on one of the surfaces.

Oak trees are native to the Northern hemisphere.

Most species of oaks live over 200 years. There are certain trees that can survive over thousand years. Oak tree planted during the reign of King John managed to survive 800 years and reign of 35 other rulers.

Oak trees are found from cool temperate to tropical latitudes in the Americas, Asia, Europe, and North Africa.

Most species of oak trees are deciduous with only a few of evergreen forms.

The Pechanga Great Oak Tree, oldest oak tree in the United States, possibly in the world. It is estimated to be up to 2,000 years old.

Oak is national plant of many countries including USA, England, France, Germany, Latvia, Poland and Serbia. It symbolizes strength and endurance.

Oaks have spirally arranged leaves, with lobate margins in many species; some have serrated leaves or entire leaf with smooth margins.

Oak is also used in the manufacture of barrels for storing of vine, whiskey, brandy and other liquors. Oak wood adds special aroma to these beverages.

Wood of oak is very strong and hard. It is used in the manufacture of ships, furniture, floorings and Yamaha drums.

The fruit is a nut called an acorn, borne in a cup-like structure. Production of acorns starts at the age of 20 to 50 years. Each acorn contains one seed (rarely two or three) and takes 6–24 months to mature, depending on their species.

Young acorns, leaves and buds contain tannic acid which induces toxic effects in cattle. Tannic acid may induce formation of ulcers in the stomach, damage in kidneys and result in malformation in the newly born cattle.

One oak produces more than 2000 acorns every year, but only one in 10 000 acorns will manage to develop into oak tree.

Oaks produce more than 2000 acorns every year, but only one in 10 000 acorns will manage to develop into oak tree.

The leaves and acorns of the oak tree are poisonous to cattle, horses, sheep, and goats in large amounts due to the toxin tannic acid, and cause kidney damage and gastroenteritis.

Oaks are keystone species in a wide range of habitats from Mediterranean semi-desert to subtropical rainforest.

Fruit of the oak is called acorn. Production of acorns starts at the age of 20 to 50 years.

Many species of oaks are under threat of extinction in the wild, because of the habitat destruction, over exploitation, diseases and introduction of invasive species.

Oak wood has great strength and hardness. The wood is very resistant to insect and fungal attack because of its high tannin content. It is used in the manufacture of ships, furniture, floorings and Yamaha drums.

Oaks have leaves that can be lobed, serrated or flat on the edges. Certain species have leaves with bristles.

Also barrels in which wines, sherry, and spirits such as brandy, Irish whiskey, Scotch whisky and Bourbon whiskey are aged are made from European and American oak. Oak barrels contribute to the color, taste, and aroma of the contents, imparting a desirable oaky vanillin flavour to these drinks. The use of oak in wine can add many different dimensions to wine based on the type and style of the oak.

Due to its large dimensions, oak requires large amount of water per day. It can absorb 50 gallons of water each day.

A number of kinds of truffles, including the two well known varieties, the black Périgord truffle and the white Piedmont truffle, have symbiotic relationships with oak trees.

The oak is a common symbol of strength and endurance and has been chosen as the national tree of many countries. Oak is national tree of USA, Germany, Serbia, Cyprus, England, Estonia, France, Moldova, Romania, Jordan, Latvia, Lithuania, Poland, Wales and Bulgaria.

One of the biggest oaks is located in Goose Island State Park. This oak is 45 feet tall, 35 feet wide, with crown that has 90 feet in diameter.

In Greek mythology, the oak is the tree sacred to Zeus, king of the gods.

In the Bible, the oak tree at Shechem is the site where Jacob buries the foreign gods of his people (Gen. 35:4). In addition, Joshua erects a stone under an oak tree as the first covenant of the Lord (Josh. 24.25–7). In Isaiah 61, the prophet refers to the Israelites as “Oaks of Righteousness.” Absalom’s long hair (2 Samuel 18:9) gets
caught in an oak tree, and allows Joab to kill him.

Oak trees are usually large in size. They can reach 70 feet in height and 9 feet in width. Their branches can reach 135 feet in length.

In Republican Rome a crown of oak leaves was given to those who had saved a life of a citizen in battle; it was called the “civic oak”

The Emancipation Oak is designated one of the 10 Great Trees of the World by the National Geographic Society and is part of the National Historic Landmark district of Hampton University.

Although it is rarely reached, the symbol of an 80th wedding anniversary is oak.

Oaks are more likely to be struck by lightning than other trees. This enhances their significance for Druids who seek ‘arwen’ or inspiration which they believe can come through lightning. They call this ‘courting the flash’.

In Britain, an oak tree image is engraved in a six pence coin. It is one of the oldest Britain’s coins.

Oak branches are displayed on some German coins, both of the former Deutsche Mark and the current Euro currency.

The Royal Oak is the third most common pub name in Britain.
Share This