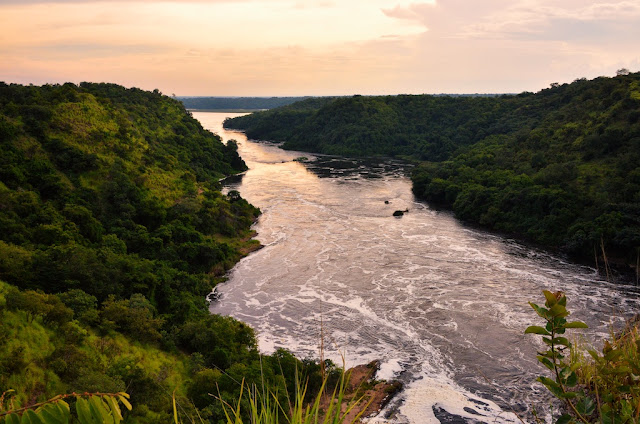 The River Nile is a major north-flowing river in northeastern Africa, generally regarded as the longest river in the world.

The drainage basin of the Nile encompasses about 10 percent of the area of Africa.

The first dams were built on the Nile in 1861 in order to raise the river levels for easier navigation and increased irrigation. Major dams on the Nile today include Aswan Dam, Roseries Dam, Sennar Dam and Owen Falls Dam.

The Nile has two major tributaries, the White Nile and Blue Nile.

A third river, the Atbara, flows into the Nile in the Sudan but it contributes less than 1% of the total water flow.

The White Nile is considered to be the headwaters and primary stream of the Nile itself.The White Nile is longer and rises in the Great Lakes region of central Africa, with the most distant source still undetermined but located in either Rwanda or Burundi. It flows north through Tanzania, Lake Victoria, Uganda and South Sudan.

Today the Nile remains a vital pathway that is essential to millions of African farmers. Egypt still imports 40 percent of its grain by means of the Nile.The Blue Nile, however, is the source of most of the water and fertile soil.The Blue Nile begins at Lake Tana in Ethiopia and flows into Sudan from the southeast.

The ancient Egyptians worshiped the Nile as one of their gods (the god Hapi) and made sacrifices solely for the Nile’s sake.

Only 22% of the river passes through Egypt, the other countries through which Nile passes are Sudan, Burundi, Ethiopia, Zaire, Kenya, Uganda, Rwanda and Tanzania.

The two rivers meet near the Sudanese capital of Khartoum.

The northern section of the Nile flows north almost entirely through the Sudanese desert to Egypt, then ends in , a large delta and empties into the Mediterranean Sea.

The Nile flows south to north, beginning in the highlands of Ethiopia and Rwanda heading toward the Mediterranean Sea at Alexandria, Egypt.

The Nile Delta is one of the world’s largest river deltas.It is around 160 kilometers (100 miles) in length and spreads out over 240 kilometers (149 miles) of coastline.It is rich in agriculture and has been farmed for thousands of years.

Around 5000 B.C., the first great Egyptian civilization was founded in the northern Nile Valley. The Egyptians came to rely heavily on the Nile and its annual summer floods for irrigation, agriculture and transportation.

Around 40 million people (half of Egypt’s population) live in the Nile Delta region.

Before stopped by dams the Nile would overflow every year.The Aswan High Dam was built in 1960. Other major dams are the Roseires Dam, Sennar Dam, Owen Falls Dam.

The vast river system of the Nile includes two main tributaries: the White Nile (so named for its milky, silt-filled appearance), and the Blue Nile, which joins the White Nile in Sudan on its way to the sea.

The Nile has flooded seasonally over millennia to provide life-giving fertile soils and irrigation for Egypt’s people.

The Nile River has certainly played a critical role in the history of ancient Egypt.Most of Ancient Egypt’s historical sites are located along the banks of the Nile River including cities such as Luxor and Cairo.

The cities that Nile flows past are Cairo, Khartoum, Gondokoro, Aswan, Karnak, Thebes and the town of Alexandria.

It was by the banks that one of the oldest civilizations in the world began. The ancient Egyptians lived and farmed along the Nile, using the soil to produce food for themselves and their animals.

Upper Egypt was known as Ta Shemau which means “the land of reeds” referring to the papyrus that grew on the banks of the river in great abundance. Papyrus was the symbol of Lower Egypt whilst the lotus flower was recognised as the symbol of Upper Egypt.

In 1787, the famous Rosetta stone was found in the Nile Delta in the city of Rosetta. This Ancient Egyptian artifact played a key role in modern understanding of Egyptian hieroglyphics.

The River Nile runs through Egypt, creating a fertile green valley across the dessert.

Many varieties of fish are found in the Nile system. Notable among those found in the lower Nile system are the Nile perch (which may attain a weight of more than 80 kilograms (175 pounds)), the bolti, the barbel, several species of catfish, the elephant-snout fish, the tigerfish or water leopard, lungfish and eel.

The Nile crocodile, found in most parts of the river is one of the largest crocodiles in the world.

The River Nile is about 6,670 km (4,160 miles) in length and is the longest river in Africa and in the world. Although it is generally associated with Egypt, only 22% of the Nile’s course runs through that country.

Other reptiles found in the Nile basin include the soft-shelled turtle, three species of monitor lizard, and some 30 species of snakes, of which more than half are venomous.

The hippos, once common throughout the Nile system, is now found only in the Al-Sudd region and to the south.

The Nile is famous as the longest river in the world. The river got its name from the Greek word Neilos, which means valley. The Nile floods the lands in Egypt, leaving behind black sediment. That's why the ancient Egyptians named the river Ar, meaning black and "Rivers of Life".

The entire Nile River Delta is estimated to drain an area of 1,293,000 square miles. This area is so vast that is has a number of different climate areas. North, in Egypt and Sudan, rainfall is sparse. More to the south, in and around Ethiopia, rainfall is heavy, contributing to the floodwaters that rush downstream and eventually create the wonderfully fertile soil that supports so much of life in Egypt and Sudan. Dams, the most notable being the Aswan High Dam, have been built along the route to prevent massive flooding of populated areas.

The name Nile is derived from the Greek Neilos (Latin: Nilus), which probably originated from the Semitic root naḥal, meaning a valley or a river valley and hence, by an extension of the meaning, a river.

The ancient Egyptians called the river ‘Ar or Aur‘ meaning “Black,” in allusion to the color of the deposits carried by the river when it flooded.

Hapi was the god of the annual flooding of the Nile in ancient Egyptian religion.Hapi was greatly celebrated among the Egyptians.

The Nile River Delta is home to many species of animals, including crocodiles, turtles, baboons, wildebeest, and more than 300 species of birds, including fishing eagles, ibis, and the Nile Valley Sunbird.

The Greek historian Herodotus wrote that “Egypt was the gift of the Nile“.

The source of the river is debatable since it is commonly known that the source of the river is Lake Victoria, which is the biggest lake in Africa, but it is observed that on the northern side of the lake there is a waterfall called Ripon Falls, which has a small opening and seemingly that is where the water in the River Nile comes from but then this cannot be held as the ultimate truth since there are many rivers that flow into Lake Victoria therefore which one of these or if all of them are the sources of The Nile. Presently River Kagera and its tributary, which is called Ruvubu whose headwaters are in Burundi, are considered to be the source of the River Nile.

Lake Nasser is the second largest man-made lake in the world. Lake Nasser is where the waters of the Nile are held back by the Aswan High Dam.The lake produces 25,000 tons of fish a year.

Nile also played an important in the building if the famous Pyramids since the blocks of stone, which were used to make these pyramids, were actually transported from the source to the site with the help of Nile.

It’s only recent that the first known navigation team successfully followed the river from beginning to its end.
Share This