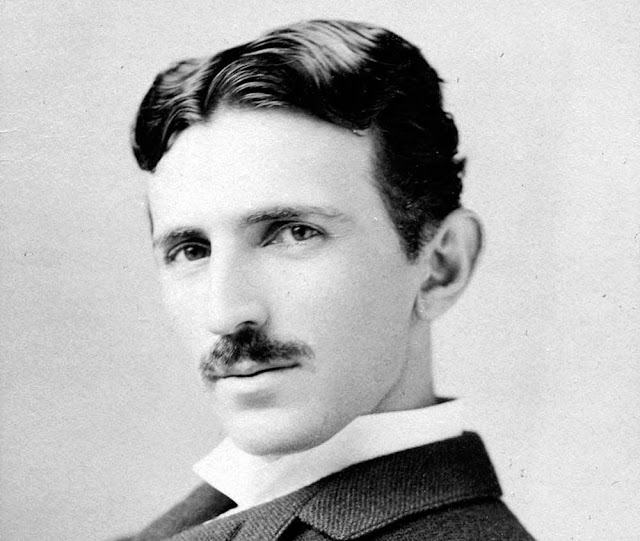 Nikola Tesla was a Serbian American inventor, electrical engineer, mechanical engineer, physicist, and futurist best known for his contributions to the design of the modern alternating current electricity supply system.

Nikola Tesla was born to Serbian parents in Croatia.

Nikola Tesla one of the most brilliant mind in the history of men was born around midnight, between July 9 and July 10, 1856 during a fierce lightning storm. According to family legend, midway through the birth, the midwife wrung her hands and declared the lightning a bad omen. This child will be a child of darkness, she said, to which his mother replied: “No. He will be a child of light.”

He was the fourth of five children and was the son of an Orthodox priest.

The defining event of young Nikola’s childhood was the day he witnessed the death of his older brother Dane in a riding accident. In the years following the tragedy, Tesla began seeing visions of the air around him “filled with tongues of living flame.As an adolescent Nikola Tesla learned to exercise his willpower to control the visions.

In 1873 he graduated from Higher Real Gymnasium.

Tesla rarely made drawings of his inventions, but worked from a picture or a memory in his head.

He had a photographic memory.

Tesla’s father was a priest at the Serbian Orthodox church.

Shortly after graduation, he contracted cholera and came very close to death.

He spent nine months recuperating during which time his father promised to send him to engineering school if he recovered.

In 1875 he entered the Austrian Polytechnic where he excelled at his studies and earned a letter of commendation.

He became addicted to gambling and never graduated.

He disappeared to hide his failure from his friends and family.

In 1881 he moved to Budapest and took a job as the chief electrician at the Budapest Telephone Exchange.

He built a 185-foot tower on Long Island, planning to suck electricity out of the air and send it through the earth. Sadly for humanity: it did not work. In 1917, the tower was torn down. Somebody blamed the government, who allegedly blamed the Germans who were supposedly using it as a spy tower. This all appears to have been a cover: Tesla was broke and his debtors wanted to salvage what they could from the wreckage.

In 1884 he moved to New York City and was hired by Thomas Edison to work at the Edison Machine Works.

Tesla completely redesigned the direct current generators but resigned from the company when Edison refused to pay him the reward he thought he had been offered.

He and two started Tesla Electric Light and Manufacturing but the partners eventually forced Tesla out and left him penniless.

In 1886 he and two new partners founded the Tesla Electric Company and set up a laboratory on Liberty Street.

Tesla's induction motor was patented in May 1888.

He also hired Tesla to be a consultant for Westinghouse Electric and Manufacturing for the exorbitant salary of $2000/mo.

Tesla worked on an a/c system to power Pittsburgh's street cars but it was not successful.

In 1893 Westinghouse won the bid to light the World's Columbian Exposition in Chicago and Tesla was able to demonstrate his fully integrated alternating current system to the world.

Westinghouse and Tesla won the contract to build the current generating system at Niagara Falls.

July 29, 1891 Tesla became a US citizen and in that same year, patented the Tesla coil.

From 1892 to 1894 he was vice president of the American institute of Electrical Engineers.

Nikola Tesla could not bear to touch hair. Also he was obsessed with the number 3 and had a habit of polishing each point of the dining room before dining, using precisely 18 napkins.

Later in his life he would spend much of his time feeding and, he claimed, mystically communicating with pigeons.

In 1898 demonstrated a radio-controlled boat but was unable to interest the government in its military applications.

Tesla experimented with X-rays and radio waves, developing important ideas and even making a few accidental discoveries thanks to his extravagant experiments.

In 1899 he moved to Colorado Springs and built a laboratory to continue his experiments in wireless telegraphy.

As Alcorn said, Tesla was “worried about the fact that people consume the Earth’s resources too fast, so he wanted to make sure that these resources were renewable“. Thus he studied the ways to gather the natural energy from the ground and air. He created artificial lightning in his lab and detected differences in electrical potential on Earth and on high objects.

In 1917 he was awarded the Edison Medal by the AIEE.

At one point Edison told Tesla he would pay $50,000 for an improved design for his DC dynamos. After months of experimentation, Tesla presented a solution and asked for the money. Edison demurred, saying, “Tesla, you don’t understand our American humor.” Tesla quit soon after.

In 1917 he correctly predicted the invention of radar though his methodology was faulty.

esla slept two hours per night, and was prone to spending two days or more in his laboratory without sleeping at all.

Mark Twain and Nikola Tesla became friends in the 1890s, thanks in part to Twain’s lifelong fascination with technology and new inventions.

He also suffered from the fear of pearls (oystersaritisphobia).Tesla could not stand the sight of pearls, to the extent that he refused to speak to women wearing them.

In 1928 Tesla received a patent for a vertical takeoff aircraft.

Tesla was the vice president of the American Institute of Electrical Engineers between 1892 and 1894.

Tesla moved his lab to Colorado Springs in 1899 where he proved the Earth was a conductor, produced artificial lightning and became well known to his neighbors with ambitious electrical experiments that caused booming thunder, rogue sparks and the occasional power outage.

In 1937 he revealed his plans for a charged particle beam weapon but he could not interest the military in its use.

He immigrated to the USA in 1884 where he worked for Thomas Edison before resigning a year later to work on his own projects.

Tesla moved to the New Yorker Hotel in 1934 where he continued his research and spent the remaining years of his life before dying in 1943 at the age of 86.

When Nikola Tesla died in the year of 1943, the Office of Alien Property took his stuff. Most of his things were given to his family, and many were taken to the Tesla Museum in Belgrade. However, some documents still remain classified by the U.S. Government.