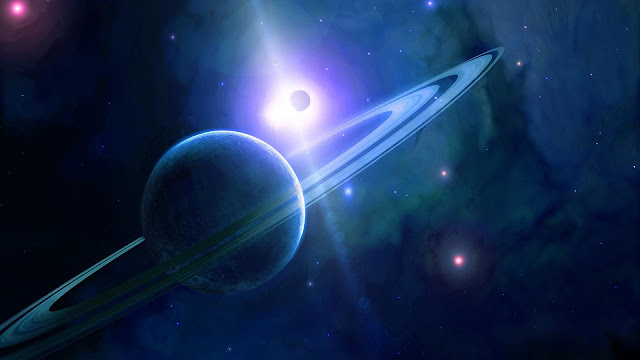 Neptune is the eighth planet from the Sun making it the most distant in the solar system. This gas giant planet may have formed much closer to the Sun in early solar system history before migrating to its present position.

Tritan, Neptune's largest moon by far, is expected to be torn apart in approximately 3.6 billion years because of its tidal acceleration.

Due to its blue coloration, Neptune was named after the Roman god of the Sea.

The wind on Neptune can reach speeds of 1,240 miles per hour. This is equal to three times the speed of Earth's worst hurricanes.

The surface temperature on Neptune is -201 degrees Celsius.

Even though Neptune has a greater mass than Uranus, it has a smaller diameter.

Voyager 2 spacecraft discovered the Great Dark Spot on Neptune in 1989. This spot was actually a storm system. In 1994 a new storm system was observed by the Hubble Space Telescope.

Neptune spins on its axis very rapidly. Its equatorial clouds take 18 hours to make one rotation. This is because Neptune is not solid body.

Neptune is 3.9 times bigger and has 17 times as much mass compared to the Eart.

Pluto is the farthest planet from the sun (even though it is not technically considered a planet anymore), but for 20 years, beginning in 1979, it actually moved closer to the sun than Neptune because of its orbit.

Neptune has 14 known moons, the most notable one being Tritan.

Neptune is a ball of gas and ice, probably with a rocky core. There’s no way you could actually stand on the surface of Neptune without just sinking in. However, if you could stand on the surface of Neptune, you would notice something amazing. The force of gravity pulling you down is almost exactly the same as the force of gravity you feel walking here on Earth. The gravity of Neptune is only 17% stronger than Earth gravity.

Although Neptune has rings, they are incomplete and as such are considered to be arcs.

The atmosphere of Neptune is made of hydrogen and helium, with some methane. The methane absorbs red light, which makes the planet appear a lovely blue. High, thin clouds drift in the upper atmosphere.

Neptune has dark spots similar to the Great Red Spot on Jupiter. These are areas of high atmospheric pressure which force clouds of methane gas high up into the atmosphere, appearing like cirrus (thin, whispy) clouds on Earth. However, these spots disappear and reappear on different parts of the planet, unlike Jupiter’s spot.

One of the largest storms ever seen was recorded in 1989. It was called the Great Dark Spot. It lasted about five years.

Neptune has 14 moons.The most interesting moon is Triton, a frozen world that is spewing nitrogen ice and dust particles out from below its surface. It was likely captured by the gravitational pull of Neptune. It is probably the coldest world in the solar system.

Triton is slowly getting closer to Neptune. Eventually, it will get so close that it may get torn apart by Neptune’s gravity and possibly form rings more spectacular than Saturn’s.

The atmosphere on Neptune is made up of helium, methane and hydrogen.

The coldest temperatures measured in the Solar System -230°c (-382°F) have been recorded on Neptune’s moon, Triton.

Neptune has its own heat source, which is a good thing because it only receives 1/900 of the sun's energy that the Earth receives.

In Neptune’s atmosphere, there is a large white cloud that moves around rather quickly. The “scooting” of this cloud around the atmosphere has led it to be named “Scooter.”

Neptune is the farthest planet from the sun, and it takes more than 164 Earth years to orbit the sun.

Only one spacecraft has flown by Neptune.In 1989, the Voyager 2 spacecraft swept past the planet. It returned the first close-up images of the Neptune system. The NASA/ESA Hubble Space Telescope has also studied this planet, as have a number of ground-based telescopes.

The stormiest planet in our solar system is Neptune.

Neptune has a mass 17 times greater than that of Earth's, but its mass is only 1/19th of Jupiter's.

Although Galileo drew images of Neptune in 1612, his drawings were actually of a fixed star and not the planet. This mistake is the reason he is not credited with Neptune's discovery.

Some of the clouds on Neptune have such a high altitude that they cast shadows on the lower altitude clouds.

It is not possible to see Neptune with the naked eye. If you try to find it with very strong binoculars or a telescope, you will see a small blue disk that looks very similar to Uranus.