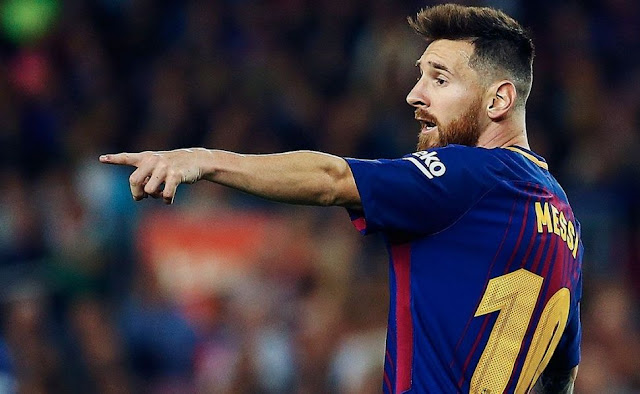 Two of the musical genres that Messi enjoys listening to are Samba and Cumbi.

Messi is the sixth youngest soccer player to score a goal in a World Cup games.

His family is of middle-class Italian origin. While his father Jorge was a factory worker, his mother Celia was a part-time cleaner.

He was offered a place in the national team by Spain which he did not accept. He wanted to wear blue-and-white Argentinian jersey, a chance he first got in 2004.

Messi shares his birthplace with the Argentinian revolutionary Che Guevera.

He was offered a place in the national team by Spain which he did not accept.

Messi is a devout Roman Catholic and he met Pope francis at the Vatican in 2013. "Without a doubt, today was one of the most special days of my life. We have to excel on and off the field," Messi said about the meeting.

Barcelona was so impressed with Messi's skills that they offered to pay his medical bills and move the family to Spain just to sign him when he was 13. That probably explains why the contract was first signed on a napkin.

Messi inherited the No. 10 Barca jersey from another great footballer Ronaldinho in the summer of 2008.

Messi was not very healthy and nutritious in his childhood days like the other boys around. He was diagnosed with a growth hormone deficiency which was stopping his normal growth rate at a tender age of 11. His parents could not afford his treatment, which was $900 a month.

Japanese jeweller Ginza Takana used a cast of Messi's left foot to create a solid gold replica, weighing 25 kilograms (55 lb), which went on sale
in Japan in March 2013 to raise funds for victims of the 2011 Tōhoku earthquake and tsunami. It was valued at $5.25 million.

Messi supports a number of charities through his Leo Messi Foundation. He also works for people suffering from Fragile X Syndrome (a disease related to autism). He is also a a goodwill ambassador for UNICEF.

He won an Olympic gold medal, along with the Argentinian football team, at the 2008 Olympic games in Beijing.

He was detected with a growth hormone deficiency at the age of 11. His parents could not afford his treatment, which was $900 a month.

At the age of 17, he made his league debut against RCD Espanyol and became the third youngest person ever to play on Barcelona. At that time he
was also the youngest player to ever score for Barcelona.

Between his contract and endorsements, he makes about $128,000 per day.

His 2005 international debut lasted 47 seconds when he received a red card after coming on as asubstitute.

Messi shares his birthplace with the Argentinian revolutionary Che Guevera. Both were born in Rosario, Argentina.

One of Lionel's nicknames is "The Flea" due to his speed and agility.

Barcelona officials were quick to spot his footballing skills. They offered to pay for Messi's medical bills and the family shifted to Spain.

Messi's first contract with Barcelona was detailed out on a paper napkin! FC Barcelona sporting director Carles Rexach was so impressed with
Messi's skills that he wanted to make a contract immediately and there was no paper available at that time.

Messi inherited the No. 10 Barca jersey from another great footballer Ronaldinho in the summer of 2008.

Lionel Messi also made his debut in the Spanish First Division league. Out of his seventeen League appearances he scored six goals. He scored one goal in six for the Champions League.

Messi is also the Goodwill Ambassador for UNICEF.

Along with England's Vivian Woodward (who accomplished the feat in the early 1900s), Messi is the only player to have scored 25 goals in a
calendar year during international competition with both his club and his country.