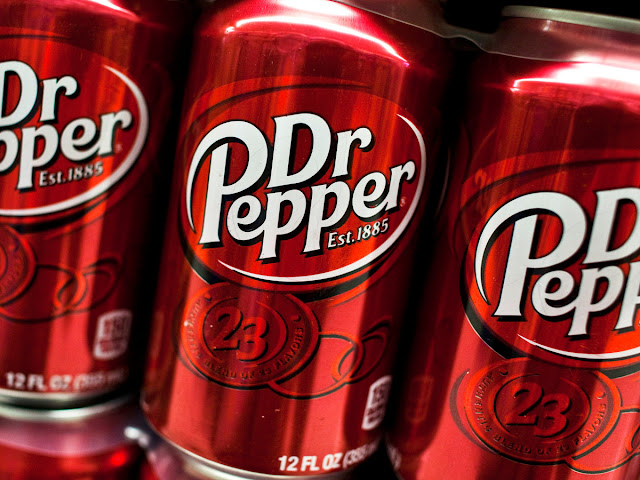 Dr Pepper is a carbonated soda promoted as having a one of a kind flavor. The drink was made in the 1880s by drug specialist Charles Alderton in Waco, Texas and first served around 1885. Dr Pepper was first broadly showcased in the United States in 1904, and is currently additionally sold in Europe, Asia, Canada, Mexico, Australia, and South America, and New Zealand and South Africa as a foreign decent. Variations incorporate an adaptation without high fructose corn syrup, Diet Dr Pepper, and a line of extra flavors, first presented in the 2000s.

Dr Pepper was first marketed as an energy booster and brain tonic, which was common for early sodas at the time.

Dr Pepper is the oldest major soft drink in America, having been created, manufactured, and sold in 1885 by pharmacist Charles Alderton.

Rumors exist as to the origins of the name, including that it gives a pep after drinking it, or that it was named after a real doctor.

The period after the abbreviation Dr. was removed in the 1950s for legibility and style reasons.

Dr. Pepper is not owned by the Coca-Cola Company or PepsiCo in the United States. It operates under the Dr Pepper Snapple Group, which also owns 7 Up and Snapple. In international markets, Coca-Cola owns the rights to Dr. Pepper for Europe and PepsiCo for Canada and Oceania.

It was introduced nationally in the United States at the 1904 Louisiana Purchase Exposition as a new kind of soda pop, made with 23 flavors.

Dr Pepper has sued Coca-Cola a few times, once for selling below trade, and once for trademark infringement.

Sugar-free Dr Pepper was first introduced in 1962 as Dietetic Dr Pepper but it was not well received. In 1966 it was renamed Diet Dr Pepper.

Pepper Free was on the market from 1982 to 1985 as a caffeine-free and diet version of Dr Pepper.

In the early 1960s, Dr Pepper promoted the idea of serving the drink hot with lemon slices in winter.
This idea appeared in the film Blast from the Past initially set in the early 1960s.

Heritage Dr Pepper was made with real sugar.

Unlike Pepsi and Coca-Cola Dr Pepper does not have a complete bottling and distribution network in the United States. It is often bottled by Pepsi or Coca-Cola bottlers.

Dr Pepper is the oldest soft drink brand in the United States.

There is a Dr Pepper museum located in Waco, Texas.

Heritage Dr Pepper became available around November 2009 in various outlets around the United States. As its name implies, it is a “re-release” of sorts of Dr Pepper’s original formula, which uses sugar
instead of high fructose corn syrup, which Dr Pepper and other brands of soft drink started to use
around the early 1970s.

Dr Pepper “Made with Real Sugar” was released to commemorate the drink’s 125th anniversary during the summer of 2010. It featured the use of “real” sugar which was likely a mix of cane and beet sugar as opposed to its usual high fructose corn syrup.

Dr Pepper TEN, a low-calorie version of Dr Pepper, was released in 2011.

Before the soft drink was named Dr Pepper it was referred to as Waco.

Some people like to heat Dr Pepper and add lemon.

Like many early sodas, the drink was also marketed as a brain tonic and energizing pick-me-up.

As with Coca-Cola, the formula for Dr Pepper is a trade secret, and allegedly the recipe is kept as
two halves in safe deposit boxes in two separate Dallas banks.

A persistent rumor since the 1930s is that the drink contains prune juice, but the official Dr Pepper FAQ refutes this with “Dr Pepper is a unique blend of natural and artificial flavors; it does not contain prune juice.”

The period (full stop) after “Dr” was discarded for stylistic and legibility reasons in the 1950s. Dr
Pepper’s logo was redesigned and the text in this new logo was slanted. The period made “Dr.” look
like “Di:”. After having been used intermittently in previous logos, followed by some debate, the
period was removed permanently.

There are other theories about the origins of the soft drink’s name. One conjecture is the “pep” refers to pepsin.

Other Dr Pepper products include a line of jelly beans made with the Jelly Belly company, a Dr Pepper-flavored Hubba Bubba bubblegum, Dr Pepper Sweet & Kickin’ BBQ Sauce and Dr Pepper “More
than Mesquite” Marinade. There is also a lip balm which has the flavour of Dr. Pepper.

In 1972, Dr Pepper sued the Coca-Cola company for trademark infringement based on a soft drink
marketed by Coca-Cola called “Peppo”. They tried naming it Dr. Pibb, which was also determined to
violate the trademark. The soft drink was later renamed Mr Pibb.

On March 26, 2008, various media outlets reported that Dr Pepper would offer ‘a free can of Dr Pepper to everyone in America’ — excluding former Guns N’ Roses guitarists Buckethead and Slash — if the band released the long-awaited Chinese Democracy in 2008. Later in the day, lead vocalist Axl Rose replied to Dr Pepper on Guns N’ Roses’ official website and spoke of his surprise at Dr Pepper’s support.

In 2009, an old ledger book filled with formulas and recipes was discovered by Bill Waters while shopping at antiques stores in the Texas Panhandle. Several sheets and letterheads hinted it had come from the W.B. Morrison & Co. Old Corner Drug Store (the same store where Dr Pepper was first served in 1885) and faded letters on the book’s cover spelled out “Castles Formulas”. John Castles was a partner of Morrison’s for a time and worked at that location as early as 1880.

The Dr Pepper Museum, located in the Artesian Manufacturing and Bottling Company building at 300 South Fifth Street in downtown Waco, Texas, opened to the public in 1991. The building was the first building to be built specifically to bottle Dr Pepper.

The inventor of Dr Pepper, Charles Alderton, was a pharmacist.

In the United Kingdom and some other countries they still use real sugar instead of high fructose corn syrup in the recipe.

There are lip balms with Dr Pepper flavoring.

Some of the Slogans used by Dr Pepper in the past have included "King of Beverages", "Good for Life", " I'm a Pepper, He's a Pepper, We're a

A can of Dr Pepper contains 150 calories and 40 grams of carbohydrates (sugars).

Charles Alderton worked at a drugstore in Waco, Texas, owned by Wade Morrison. Legend has it that Morrison named it “Dr. Pepper” after the father of a young girl he was once in love with.