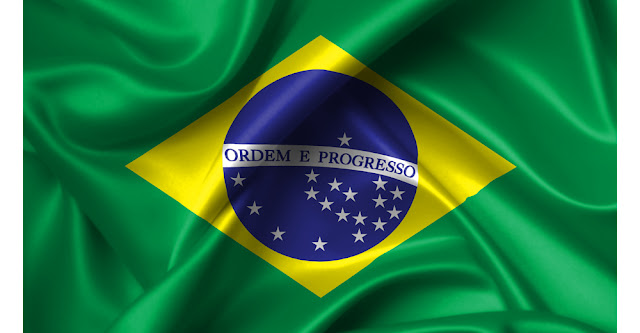 Brazil is the largest country in both South America and Latin America as well as the world’s fifth-largest
country by both area and population.

The official name is the Federative Republic of Brazil.

The official language is Portuguese.

There are approximately 75.8 million people in Brazil with internet access.

Brasília, inaugurated as Brazil’s capital in 1960, is a planned city distinguished by its white, modern architecture, chiefly designed by Oscar Niemeyer. It is a masterpiece of modernist architecture listed as a World Heritage Site by UNESCO.

Brazil is a popular tourist destination with millions of visitors arriving each year for vacation.

The largest city in Brazil is Sao Paulo. Other major cities include Rio de Janeiro, Salvador and Fortaleza.

The Corcovado Mountains in Rio de Janeiro are one of the most famous mountains in the world. On its summit there has been a 98-feet-tall statue of Christ the Redeemer since 1931.

The Amazon River, which runs through Brazil, is the second longest river in the world. The Nile is the longest.

The coastline of Brazil measures 7,491 kilometers (4,655 miles), which makes it the 16th longest national coastline of the world.

A considerable number of geographical features can be found all through the coastal areas, like islands, reefs and bays. The beaches of Brazil (2095 in total) are famous in the world and receive a great number of tourists.

Copacabana is a bairro (neighbourhood) located in the South Zone of the city of Rio de Janeiro, Brazil. It is known for its 4 kilometers (2.5 miles) balneario beach, which is one of the most famous in the world.

There were 77 founding members of the United Nations. Brazil was one of them.

Ipanema shares a border with Copacabana, but this world-class beach destination is more poised than its south Rio counterpart. Like a samba that swings so cool, this neighborhood is known for culturally enriching contributions and nonstop parties.

Brazil is so large that there are three time zones in the country.

One of Brazil's most famous attractions is Rio Carnival. It is a major celebration that can take a year to prepare for and it attracts a large number of tourists every year.

Brazil has around 70 national parks and 19 UNESCO World Heritage Sites.

Christ the Redeemer is a statue that was built as a symbol of Brazilian Christianity. The statue has also become a cultural icon of both Rio de Janeiro and Brazil, and is listed as one of the New Seven Wonders of the World.

Every country in South America borders Brazil except for Ecuador and Chile.

The Harbor of Rio de Janeiro is located in Brazil and was created by erosion from the Atlantic Ocean and is also known as Guanabara Bay. It is one of the Seven Natural Wonders of the World.

Brazil gained its independence in 1822. Brazilians celebrate their Independence Day on September 7th each year.

The exquisite Iguazu Falls are also known as the Iguassu Falls and the Iguaçu Falls. The magnificent spectacle of these 275 individual drops has awed tourists, locals and indigenous inhabitants for centuries. They originate from the Iguazu River and are located on the border of Brazil (in the state of Paraná) and Argentina.

When the Portuguese arrived in the Brazilian region in 1500 they claimed the land for Portugal.

The Amazon River, over half of which lies within Brazil,the largest river by discharge of water in the world, and the second in length. It is 3,977 miles (6,400 km) long and during the wet season it can become over 48 kilometers (30 miles) wide.

Approximately 60% of the Amazon Rainforest is located within Brazil's boundaries.

There are 13 cities in the country of Brazil with more than one million residents.

Brazil's capital city is Brasilia and its largest city is Sao Paulo.

The Amazon Theatre is an opera house located in Manaus, in the heart of the Amazon rainforest in Brazil. It was assembled in 1896 from panels shipped from overseas. It has an iron frame built in Glasgow, Scotland; 66,000 colored tiles from France; and frescoes painted by the Italian artist Domenico di Angelis.

Other major cities in Brazil include Fortaleza, Salvador, and Rio de Janeiro.

One of Brazil’s most famous attractions is Rio Carnival. It is a festival held before Lent every year and considered the biggest carnival in the world with two million people per day on the streets. The first festivals of Rio date back to 1723.

Of all Brazilian music styles, samba is undoubtedly the best known. Both abroad and in Brazil, samba has become a symbol of the Brazilian nation and its people. Modern Samba music dates from the 19th century when the crude tones of the slaves met with the stylized European sound of Rio de Janeiro.

Brazil derives its name from brazilwood tree. In Portuguese brazilwood is called pau-brasil.

The Brazilian national dish is feijoada, a black bean stew with dried, salted, and smoked meat.

The Brazilian national drink is the caipirinha which is cachaca (sugarcane liquor) mixed inside a glass with sugar, ice, and crushed lime slices.

By both population and land area, Brazil is the fifth largest country in the world. In 2012 the population was approximately 194 million.

On Brazil’s modern flag, the green represents the forests of Brazil, the yellow rhombus reflects its mineral wealth, and the blue circle and stars depict the sky over Rio de Janeiro on the morning of November 15, 1889, when Brazil declared itself a republic. Across the blue circle is a white banner that reads, “Ordem E Progresso,” that translates in English to Order and Progress.

Brazil has more than one national animal. They are the Jaguar, the Macaw and a Rufous-Bellied Thrush.

There are an additional 180 native languages spoken in Brazil.

Football is the most popular sport in Brazil with the national team consistently among the best in the world, winning the World Cup a record 5 times.

The 2016 Olympic Games in Rio de Janeiro, Brazil, will be the first time a South American country has the right to host them.

Brazil has been the largest producer of coffee for the last 150 years.

The official language in Brazil is Portuguese. Brazil is the largest Portuguese-speaking country in the world.

Brazil has the 2nd highest number of airports in the world, after the U.S.

Brazil is the world’s first country to ban tanning beds.

There’s an Island in Brazil where civilians are forbidden to go: it has up to 5 snakes per square meter (10 square feet).

Indonesia has the world’s highest rate of deforestation, with Brazil as a close second.

4% of Brazil's rainforests are being destroyed each year because of ranching, logging, and slash-and-burn agricultural practices.

Brazil’s Capital, Brasilia, looks like an aeroplane from above.

The name Brazil originates from a tree called the brasilwood. It is a dark rosewood tree that was originally Brazil's main export. Exporting Brazilian rosewood is now illegal.

Rio de Janeiro was once the capital of Portugal, making it the only European capital outside of Europe.

Logging, mining and agriculture are a serious threat to Brazil's environment.

The biggest Japanese community outside of Japan is in Brazil.

There’s a prison in Brazil that allows inmates to pedal stationary bicycles, providing electricity to a nearby city in exchange for reduced sentences.

Brazilian prisoners can reduce their sentence by 4 days for every book they read and write a report on.

There are many different species of animals in Brazil including armadillos, pumas, jaguars and tapirs.

Brazilian athletes funded their trip to the 1932 Olympics by selling coffee along the way.

Brazil was the only independent South American country to send ground troops to fight in WW2, with over 25,000 soldiers.

Diamonds were first discovered in India and then in Brazil.

Soccer is Brazil's most popular sport.

The largest population of Catholics in the world is in Brazil: 123 million, 64% of its population.
Share This