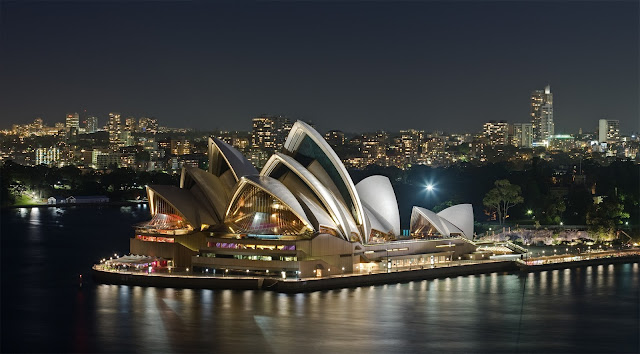 Sydney Opera House was opened by Queen Elizabeth II on 20th October, 1973. She has since visited four times, most recently in 2006.

More than 8.2 million people visit the Opera House every year.

Sydney Opera House is cooled using seawater taken directly from the harbour. The system circulates cold water from the harbour through 35 kilometres of pipes to power both the heating and air conditioning in the building.

Each year, Chinese New Year is celebrated at the Opera House with sails lit in red, Lunar Lanterns and Mandarin tours. In 2016, some 22,000 people celebrated with us.

In 1957, Jorn Utzon, was announced as the winner of a competition that was geared towards coming up with the best design of the opera house.

The design of the Sydney Opera House was inspired by nature, its forms, functions and colours. Utzon was influenced in his designs by bird wings, the shape and form of clouds, shells, walnuts and palm trees. He looked upon nature for guidance when designing, as nature over time combined both efficiency and beauty, hand in hand.

The roof structures of the Opera House are called ‘shells’. The design of the ‘shells’ was one of the most difficult aspects of the building’s design. Jorn Utzon claimed that the final design of the shells, was inspired by peeling an orange. It is said that the shells of the 14 separate roofs, form a sphere if combined.

A net was installed above the orchestra pit in the Joan Sutherland Theatre during the 1980s following an incident during the opera Boris Godunov. The opera featured live chickens and one bird walked off the stage and landed on top of a cellist.

The architectural style is Expressionist Modernism – which involves innovative form and use of novel materials.

The Topaz glass that is used on the Opera was custom-made specifically for the Opera House by
Boussois-Souchon-Neuvesel in France.

Paul Robeson was the first person to perform at Sydney Opera House. In 1960, he climbed the scaffolding and sang Ol' Man River to the construction workers as they ate lunch.

The highest tip of the Sydney Opera House reaches 67 meters above the water – the equivalent height of a 22 story building. Over 350 kilometers (217 miles) of steel cable was used in the Opera House’s construction, which is long enough to reach from Sydney to Canberra

The Opera House’s sails were built using cranes made specifically for the job in France, each costing $100,000 AUD.

There are approximately 1 million roof tiles covering an area of approximately 1.62 hectares that sit over the structure. They were made by a Swedish tile company, Höganas.

The Grand Organ in the Opera house was built for a period of 10 years. It is the largest mechanical music instrument in the world with 10,154 pipes.

The original cost estimate to build Sydney Opera House was $7 million. The final cost was $102 million and it was largely paid for by a State Lottery.

Within the facility are 7 performance venues that include; the Concert Hall, the Opera Theatre, Playhouse, Drama Theatre, The Studio, the Forecourt and the Utzon Room. The Concert Hall as the largest seating venue a maximum of 2,679 guests and the Utzon room as smallest venue only having capacity for 210.

The Sydney Opera House was constructed by about 10,000 workers and was opened by Queen Elizabeth II on 20th October, 1973.

Seven A380s could sit wing-to-wing on the site.

The Sydney Opera House is Australia’s most recognisable building and is an icon of Australia’s creative and technical achievement.

The building was listed as a UNESCO World Heritage site in 2007, and the organisation describes it as “great urban sculpture set in a remarkable waterscape, at the tip of a peninsula projecting into Sydney Harbour.”

There are more than 1 million roof tiles covering approximately 1.62 hectares sitting over the structure. They were made in Sweden.

233 designs were submitted for the Opera House international design competition held in 1956. Jørn Utzon from Denmark was announced the winner, receiving ₤5000 for his design.

Its performances have an annual audience of two million.

Sydney Opera House is open to the public 363 days a year – closed on Christmas Day and Good Friday. Staff work every day of the year, 24/7.

Sydney Opera House sits on Bennelong Point. Bennelong Point was named after Woollarawarre Bennelong, a senior Eora man at the time of the arrival of British colonisers in Australia in 1788.

When the Sydney Symphony Orchestra is on stage in the Concert Hall, the temperature must be 22.5 degrees to ensure the instruments stay in tune. Temperature and humidity are critical to musical instruments.