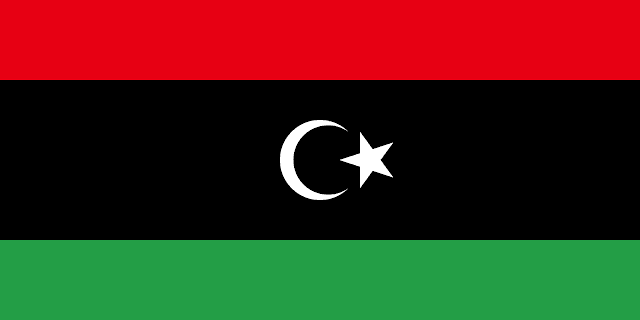 Libya is a country located in North Africa.

The official name of the country is Libya.

It is bordered by the Mediterranean Sea to the north, Egypt to the east, Sudan to the southeast, Chad
and Niger to the south and Algeria and Tunisia to the west.

The official language is Arabic.

Tripoli is the capital city and the largest city of Libya. The city is located in the northwestern part of Libya on the edge of the desert, on a point of rocky land projecting into the Mediterranean and forming a bay.

Libya’s terrain is mostly barren, and features flat to undulating plains, plateaus and depressions.
Several highlands dot the landscape, but there are almost no true mountain ranges, except for the
Tibesti Massif along its border with Chad.

Bikku Bitti, also known as Bette Peak, is the highest mountain in Libya at 2,266 meters (7,434 ft). It is located on the Dohone spur of the Tibesti Mountains in southern Libya, near the Chadian border.

South of Libya’s narrow coastal strip is a sparse grassland giving way to the Sahara Desert – a vast, unfertile wasteland that supports a very small percentage of people and agriculture.

The Mediterranean coast and the Sahara Desert are Libya’s most prominent natural features.

Within Africa, Libya has the longest Mediterranean coastline, and is home to many beaches.

Cyrene was an ancient Greek and Roman city near present-day Shahhat, Libya. It was the oldest and most important of the five Greek cities in the region. It gave eastern Libya the classical name Cyrenaica
that it has retained to modern times. Since 1982, it has been a UNESCO World Heritage Site.

Leptis Magna was enlarged and embellished by Septimius Severus, who was born there and later became emperor. It was one of the most beautiful cities of the Roman Empire, with its imposing public monuments, harbour, market-place, storehouses, shops and residential districts. Since 1982, it has been a UNESCO World Heritage Site.

A Phoenician trading-post that served as an outlet for the products of the African hinterland, Sabratha was part of the short-lived Numidian Kingdom of Massinissa before being Romanized and rebuilt in the 2nd and 3rd centuries A.D. Since 1982, it has been a UNESCO World Heritage Site.

The Arch of Marcus Aurelius is a Roman triumphal arch in the city of Oea, modern Tripoli, where it is found near the northeastern entrance to the Medina. It is a quadrifrons trumphal arch, surmounted by
an unusual octagonal cupola,and was erected (entirely in marble) by Gaius Calpurnius Celsus,
quinquennial duumvir of the city, to commemorate the victories of Lucius Verus, junior colleague and
adoptive brother of the Emperor Marcus Aurelius, over the Parthians in the Roman–Parthian War of
161–66.

One of the most spectacular sights in Libya is Tripoli’s massive Red Castle, set on an island adjacent
to the shore. Built in the 16th century on the site of a Roman military encampment, it was the seat of
power for Ottoman conquerors. The magnificent fortress also holds one of Libya’s finest museums,
although renovations are presently taking place, so some of the galleries are closed.

Ghadamès, known as ‘the pearl of the desert’, stands in an oasis. It is one of the oldest pre-Saharan
cities and an outstanding example of a traditional settlement. Its domestic architecture is characterized by a vertical division of functions: the ground floor used to store supplies; then another floor for the family, overhanging covered alleys that create what is almost an underground network of passageways; and, at the top, open-air terraces reserved for the women. The old part of the town, which is surrounded by a city wall, has been declared a UNESCO World Heritage site in 1986.

Tadrart Acacus also known as the Acacus Mountains is a mountain run in Ghat, Libya. It structures some piece of the Saharan Desert. There are many hole compositions and rock craft in the region, made in different styles. The area was inscribed as a UNESCO World Heritage Site in 1985 because of the
importance of these paintings and carvings. The paintings date from 12,000 B.C. to 100 A.D. and reflect cultural and natural changes in the area. There are paintings and carvings of animals such as giraffes, elephants, ostriches and camels, but also of men and horses. People are depicted in various daily life situations, for example while making music and dancing.

Libya has been inhabited by Berbers since the late Bronze Age. The Phoenicians established trading posts in western Libya, and ancient Greek colonists established city-states in eastern Libya. Libya was variously ruled by Carthaginians, Persians, Egyptians and Greeks before becoming a part of the Roman Empire. Libya was an early centre of Christianity. After the fall of the Western Roman Empire, the area of Libya was mostly occupied by the Vandals until the 7th century, when invasions brought Islam and Arab colonisation. In the 16th century, the Spanish Empire and the Knights of St John occupied Tripoli, until Ottoman rule began in 1551. Libya was involved in the Barbary Wars of the 18th and 19th centuries. Ottoman rule continued until the Italian occupation of Libya resulted in the temporary Italian Libya colony from 1911 to 1943.

In 1949, the UN voted that Libya should become independent, and in 1951 it became the UnitedKingdom of Libya.

Col Gaddafi seized power in 1969 and ruled for four decades until he was toppled in 2011 following an
armed rebellion assisted by Western military intervention.

The Economy of Libya depends primarily upon revenues from the petroleum sector, which contributes practically all export earnings and 80% of GDP. These oil revenues and a small population have given Libya the highest nominal per capita GDP in Africa.

Libya is a large country with a relatively small population, and the population is concentrated very narrowly along the coast.

Ninety percent of the people live in less than 10% of the area, primarily along the coast.

There are about 140 tribes and clans in Libya.

About 97% of the population in Libya are Muslims, most of whom belong to the Sunni branch.

Libyan cuisine derives much from the traditions of Mediterranean, North African, and Berber cuisines. There are four main ingredients of traditional Libyan food: olives (and olive oil), dates, grains and milk. One of the most popular Libyan dishes is Bazin, an unleavened bread prepared with barley, water and salt.

As with most of the African countries, Libya has an ongoing love affair with football.