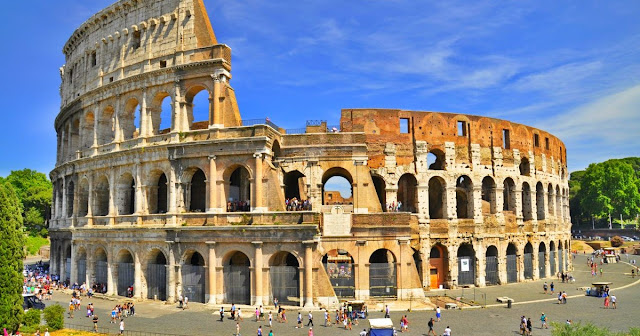 The Colosseum was built by Emperor Vespasian, founder of the Flavian dynasty, for Titus, his successor.

Colosseum is an elliptical building measuring 189 meters long and 156 meters wide with a base area of 24,000 m² with a height of more than 48 meter.

The Colosseum has over 80 entrances and can accommodate about 50,000 spectators.

It is thought that over 500,000 people lost their lives and over a million wild animals were killed throughout the duration of the Colosseum hosted people vs. beast games.

All Ancient Romans had free entry to the Colosseum for events, and were also fed throughout the spectacles.

Festivals as well as games could last up to 100 days in the Colosseum.Around Rome Tours - Colosseum facts

The Ancient Romans would sometimes flood the Colosseum and have miniature ship naval battles inside as a way of entertainment.

The Colosseum only took 10 years to build starting in 70 AD and was completed in 80 AD using over 60,000 Jewish slaves.

The marble façade and some parts of the Colosseum were used for the construction of St Peter’s Basilica and later monuments.

Many natural disasters devastated the structure of the Colosseum, but it was the earthquakes of 847 AD and 1231 AD that caused most of the damage you see today.

Receiving millions of visitors every year, the Colosseum is the most famous tourist attraction of Rome.

Despite its brutal pagan origins, the Colosseum has been used as a worship space by Christians over the centuries. A large cross was removed in the 1870's during a frenzy of secular archaeology funded by the new Italian state. That cross was replaced by Mussolini in 1926 in a cynical effort to placate Catholics.

Gladiators were marginalized persons in Roman society, without the rights of citizenship, and essentially (or literally) slaves.The gladiators were both admired and reviled by the Romans.

Although the Romans' gladiatorial spectacles petered out in about 432 AD, it was not because of any Christian edict. It was primarily due to the cost of procuring animals and gladiators and maintaining the expensive facility, which by this time was badly deteriorating.

The Fighting Killed Off Whole Species The sheer quantity of slaughter in the Colosseum saw the number of lions, jaguars, and tigers plummet across the globe. According to some, Roman hunting absolutely “devastated the wildlife of North Africa and the entire Mediterranean region,” wiping some species of animal off the map entirely.

After one particularly brutal set of games in which 9,000 animals were slaughtered, the hippo disappeared from the river Nile. Creatures like the North African elephant, which was also commonly used as a war elephant during the time, were wiped of the face of the Earth completely.

The area beneath the Colosseum was called the Hypogeum (meaning underground). The hypogeum consisted of two-level subterranean network of tunnels and 32 animal pens. It had 80 vertical shafts which provided instant access to the arena for animals and scenery.

The original name of the Colosseum was Flavian Amphitheater, after the Flavian Dynasty of Emperors.

Rome´s most popular monument was built for three reasons. As a gift to the Roman Citizens from the Flavian Dynasty to increase their popularity, to stage various forms of entertainment, and to showcase Roman engineering techniques to the world.

The Colosseum was used for gladiatorial contests and public spectacles such as animal hunts, mock sea battles, re-enactments of famous battles, executions and dramas.

The Colosseum was not designed by a single prominent designer/architect as it would be if built today. During medieval times it was said to have been designed by the ancient Roman poet Virgil. Now we know that Virgil died well before the Colosseum was conceived.

During the inaugural games of the Colosseum in 80 CE held by Titus, some 9,000 wild animals were slaughtered.

In 107 CE, Emperor Trajan is said to have celebrated his victories in Dacia with contests involving 11,000 animals and 10,000 gladiators within 123 days.

It is estimated that the games played in the Colosseum for hundreds of years have taken the lives of about 500,000 people and over a million wild animals.

The last gladiatorial fights occurred in 435 CE and the last animal hunts stopped in 523 CE. It was primarily due to the cost of procuring animals and gladiators and maintaining the expensive facility.

More than 100,000 cubic meters of travertine stone were used for the outer wall of Colosseum which was set without mortar held together by 300 tons of iron clamps.

Based on historical evidences, it shows that 200 bullock carts were used to transport marbles to the construction site.

The total amount of marbles used for the construction of the Colosseum was estimated at 100,000 cubic meters.