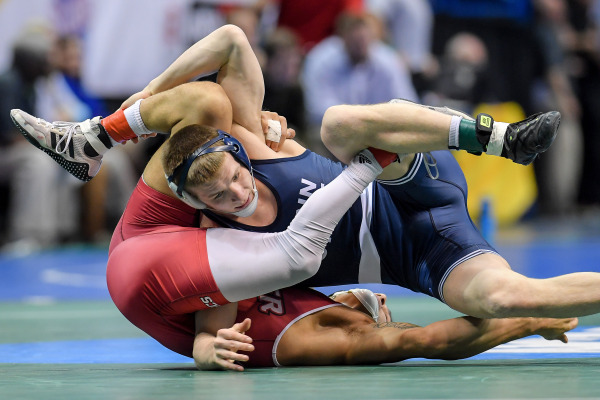 Wrestling is popular in ancient mythology. Zeus became ruler of the earth following a wrestling match when he defeated Cronus, his father.

The earliest documented wrestling match took place in the Eighth century B.C. at the ancient Olympic Games, according to the International Federation of Associated Wrestling Styles. The Greco-Roman style of wrestling was registered in the modern Olympic games in 1896, and has remained a staple in the Olympic games since. In addition to Olympic wrestling competitions, smaller tournaments and bouts gradually appeared in the early 1900s, resulting in numerous high school and college wrestling teams.

Wrestling was referenced in the oldest book in the world = The Bible.

The two most common styles of wrestling practiced around the world are Greco-Roman and freestyle wrestling. The Mt. Lebanon School District Wrestling Regulations lists two additional wrestling divisions: Olympic wrestling and college wrestling. Televised professional wrestling leagues are generally not included in the list of wrestling divisions, due to the fact that these fights are often staged and are not determined by skill. One primary difference between freestyle and Greco-Roman wrestling is that freestyle wresters are able to perform holds on the waist and legs, allowing for a greater variety of holds.

In 1896 the founder of the modern Olympic Games Baron Pierre de Coubertin named wrestling as one of the 'Foundational Sports' of the Olympic Games.

Different countries have different wrestling styles built upon disciplines related to their culture.

WrestleMania is a form of entertainment wrestling with larger-than-life characters staging battles in the ring. Some of the characters
include Jimmy Hart, The Undertaker, The Deadman, and Hulk Hogan.

Wrestling is believed to build perseverance, diligence and determination.

At the high school level wrestling ranks 6th in participation for all boys' sports.

The number of female high school wrestlers has been growing since 1994.

Tournaments and competitions governed by the International Federation of Associated Wrestling Styles use four divisions for scoring points in a wrestling match. Takedowns, worth two points, are scored when a wrestler brings their opponent down from a standing position. Reversals, also worth two points, are scored when a wrestler who is controlled by the opponent executes a move that allows them to assume a controlling position on top of their opponent. Pinning an opponent so that his back is on the mat or tilted farther than a 45-degree angle toward the mat can score two to three points depending how long he is pinned. Lastly, a single point is earned when a wrestler successfully escapes from an opponent and returns to a standing position.

The largest wrestling tournament in the world is the Cadet/Junior National Championships. It has over 3,600 entries each year.

Intercollegiate wrestling has existed for more than 100 years.

Of all NCAA Championships collegiate wrestling ranks in the top five for revenue.

Wrestling is a sport that does not require much money to begin.

Although wrestlers wear protective headgear, they are exposed to a variety of injuries through contact with their opponent and the mat. Contusions and lacerations are fairly common and concussions occur as well.

Shuai jiao is a wresting style over 4000 years old originating in China.

It was Greco-Roman wrestling that was an event in the first modern Olympic Games in 1896 in Athens, Greece.

Beach wrestling is a form of wrestling that is done by male or female wrestlers while standing. The competitors stand inside a 6 meter diameter sand-filled circle. The goal is to push the opponent out of bounds or to pin their shoulders to the ground.

Oil wrestling is the Turkish national sport, and wrestlers cover themselves in olive oil. This wrestling match could go on for many days originally, but in 1975 the time was limited to 40 minutes.

Russia has a form of wrestling called sambo that means 'self-defense without a weapon'.

The Japanese style of wrestling is known as puroresu and is more sports-oriented than the wrestling found in North America today made popular by theatrics and characters.