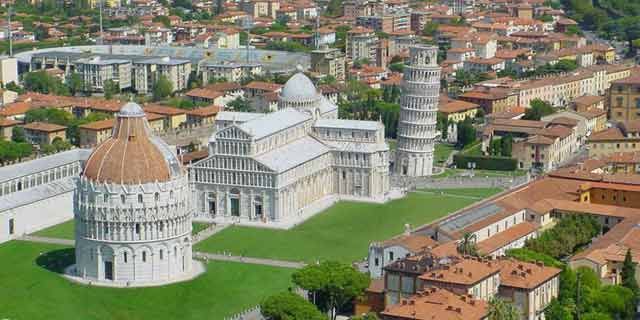 The Piazza dei Miracoli or Square of Miracles formally known as Piazza del Duomo is a walled
8.87-hectare (21.9-acre) area located in the extreme northwestern part in the city of Pisa, Italy.

The area is recognized as an important center of European medieval art and one of the finest
architectural complexes in the world.

Partly paved and partly grassed, the Piazza dei Miracoli is also the site of the Ospedale Nuovo di
Santo Spirito (New Hospital of the Holy Spirit), which houses the Sinopias Museum and the Cathedral Museum.

The name Piazza dei Miracoli was coined by the Italian writer and poet Gabriele d’Annunzio who, in his novel Forse che sì forse che no (1910), described the square as the “prato dei Miracoli,” or “meadow
of miracles”.

In 1987, the Piazza dei Miracoli was declared a UNESCO World Heritage Site.

The heart of the Piazza dei Miracoli is the Pisa Cathedral, dedicated to the Assumption of the Virgin
Mary.

Begun in 1063, the cathedral is a masterpiece of Romanesque architecture. It includes various stylistic elements: classical, Lombard-Emilian, Byzantine, and Islamic, drawing upon the international presence of Pisan merchants at that time.

The main architect was Buscheto, who is buried in the last blind arch on the left side of the facade.
The facade itself was built by Buscheto’s successor, Rainaldo.

The interior, subdivided at the front into a central nave flanked by two side aisles on either side and with the transept and apse in three naves, is covered with white and black marble, with monolithic grey marble columns having corinthian capitals. It has a wooden 17th-century coffered ceiling, painted and decorated with gold leaf, made by Domenico and Bartolomeo Atticciati; it bears the Medici coat of arms. Presumably the earlier ceiling was a structure with wooden trusses.

A disastrous fire in 1595 destroyed most of the cathedral’s medieval art, but some of the best Renaissance artists were hired for the redecoration work.

Galileo is believed to have formulated his theory about the movement of a pendulum by watching the
swinging of the incense lamp (not the present one) hanging from the ceiling of the nave. That lamp,
smaller and simpler than the present one, is now kept in the Camposanto, in the Aulla chapel.

The Baptistery, dedicated to St. John the Baptist, stands opposite the west end of Pisa Cathedral.
Construction on the Pisa Baptistery was started in 1153 by the architect Diotisalvi and was completed in 1363.

The Baptistery is constructed of marble, as is common in Italian architecture.

The interior is overwhelming and lacks decoration. The octagonal font at the centre dates from 1246
and was made by Guido Bigarelli da Como. The bronze sculpture of St. John the Baptist at the centre of
the font, is a work by Italo Griselli.

Dedicated to St John, the walls display artworks depicting various stages of St. John’s life and there is a piece depicting Christ between the Madonna and St. John, surrounded by Angels on the upper storey.

Constructed on the same unstable sand as the tower and cathedral, the Baptistery leans 0.6 degrees
toward the cathedral.

The campanile (bell tower), commonly known as the Leaning Tower of Pisa, is located behind the
cathedral.

The tower’s tilt began during construction in the 12th century, caused by an inadequate foundation on
ground too soft on one side to properly support the structure’s weight. The tilt increased in the decades before the structure was completed in the 14th century. It gradually increased until the structure was stabilized (and the tilt partially corrected) by efforts in the late 20th and early 21st centuries.

Prior to restoration work performed between 1990 and 2001, the tower leaned at an angle of 5.5 degrees, but the tower now leans at about 3.99 degrees. This means the top of the tower is displaced horizontally 3.9 meters (12 ft 10 in) from the center.

The Leaning Tower of Pisa has eight floors. The seven bells are located on the eighth floor. Each bell
represents one note of the musical major scale.

The Campo Santo also known as Camposanto Monumentale (Monumental Cemetery) is located at the northern edge of the square.

This walled cemetery is said to have been built around a shipload of sacred soil from Calvary, brought
back to Pisa from the Fourth Crusade by Ubaldo de’ Lanfranchi, the archbishop of Pisa in the 12th century.

The building was the fourth and last one to be raised in the Cathedral Square. It dates from a century
after the bringing of the soil from Golgotha, and was erected over the earlier burial ground.

The Camposanto Monumentale once contained a large collection of Roman sculptures and sarcophagi, but now there are only 84 remaining. The walls were once covered in frescoes, the first were applied in
1360, the last about three centuries later.
Share This