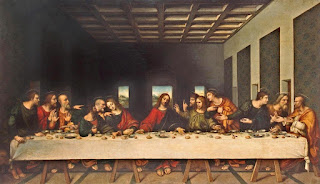 The name says it all. The Last Supper was Jesus’ last supper with his twelve disciples before he was crucified.

As part of Eucharist (or communion), Jesus took the bread that was on the table, broke it in half (or close to half) and told his disciples to take it and eat it.

The bread represents the body of Christ.

After taking bread, Jesus then took the wine from the table and told his disciples to drink it.

The wine represents the blood of Jesus.

The Last Supper was actually foretold in the Old Testament. A “priest from God Most High” named Melchizedek “brought out bread and wine[3]” And David said that Jesus would be “a priest forever in the order of Melchizedek.“

Jesus’ final supper was so important, Leonardo da Vinci depicted the scene in his famous painting titled The Last Supper.
The painting itself is huge. It’s about 15 feet by 29 feet (4.6 x 8.8 meters).

What’s interesting to note is there are groups of three in the painting, probably representing the Holy Trinity. Jesus’ figure resembles a triangle; three windows are seen behind Jesus; and the disciples are in groups of three.

The painting itself is in terrible shape. Less than half of da Vinci’s artwork is still on the restored painting.

To make things more confusing, Jesus may have used a different calendar than the rest.

A few other incidents happened at that table. Jesus predicted that Peter would deny Jesus’ existence three times before the rooster crowed. Guess what Peter did a few days later?

What’s better is that, during the meal, in a casual tone, Jesus said someone would betray him that night. This led to a mini-conspiracy theory for all the disciples to chew on. Turned out, Jesus knew it was Judas who would betray him.

After supper, Jesus went to the Garden of Gethsemane to pray and asked God not to go through with his crucifixion.
What’s Passover? It’s a celebration to commemorate the exodus from Egypt.

When Jesus went to the garden to pray, he told his disciples to stay awake and keep watch for an hour or so. They fell asleep, so Jesus yelled at them. It may have been from eating too much food at the Last Supper.