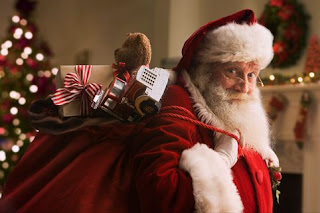 Norwegian scientists have hypothesized that Rudolph’s red nose is probably the result of a parasitic infection of his respiratory system.

The Germans made the first artificial Christmas trees out of dyed goose feathers.

Each year more than 3 billion Christmas cards are sent in the U.S. alone.

All the gifts in the Twelve Days of Christmas would equal 364 gifts.

The “true love” mentioned in the song “Twelve Days of Christmas” does not refer to a romantic couple, but the Catholic Church’s code for God. The person who receives the gifts represents someone who has accepted that code. For example, the “partridge in a pear tree” represents Christ. The “two turtledoves” represent the Old and New Testaments.

The first printed reference to a Christmas tree was in 1531 in Germany.

Most of Santa’s reindeer have male-sounding names, such as Blitzen, Comet, and Cupid. However, male reindeers shed their antlers around Christmas, so the reindeer pulling Santa’s sleigh are likely not male, but female or castrated.

During the Christmas season, nearly 28 sets of LEGO are sold every second.

In A.D. 350, Pope Julius I, bishop of Rome, proclaimed December 25 the official celebration date for the birthday of Christ.

According to the Guinness world records, the tallest Christmas tree ever cut was a 221-foot Douglas fir that was displayed in 1950 at the Northgate Shopping Center in Seattle, Washington.

The traditional three colors of Christmas are green, red, and gold. Green has long been a symbol of life and rebirth; red symbolizes the blood of Christ, and gold represents light as well as wealth and royalty.

In 1962, the first Christmas postage stamp was issued in the United States.

Contrary to popular belief, suicide rates during the Christmas holiday are low. The highest rates are during the spring.

Christmas trees usually grow for about 15 years before they are sold.

Many European countries believed that spirits, both good and evil, were active during the Twelve Days of Christmas. These spirits eventually evolved into Santa’s elves, especially under the influence of Clement C. Moore’s The Night Before Christmas (1779-1863) illustrated by Thomas Nast (1840-1902).

Puritan Oliver Cromwell outlawed Christmas celebrations and carols in England from 1649-1660. The only celebrations allowed were sermons and prayers.

Each year there are approximately 20,000 “rent-a-Santas” across the United States. “Rent-a-Santas” usually undergo seasonal training on how to maintain a jolly attitude under pressure from the public. They also receive practical advice, such as not accepting money from parents while children are looking and avoiding garlic, onions, or beans for lunch.

Alabama was the first state in the United States to officially recognize Christmas in 1836.

Christmas wasn’t declared an official holiday in the United States until June 26, 1870.

According to the United Nations Children’s Fund (UNICEF), there are 2,106 million children under age 18 in the world. If there are on average 2.5 children per household, Santa would have to make 842 million stops on Christmas Eve, traveling 221 million miles. To reach all 842 million stops, Santa would need to travel between houses in 2/10,000 second, which means he would need to accelerate 12.19 million miles (20.5 billion meters) per second on each stop. The force of this acceleration would reduce Santa to “chunky salsa.”

Oklahoma was the last U.S. state to declare Christmas a legal holiday, in 1907.