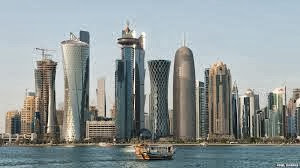 Qatar (pronounced KAH-ter) occupies a small peninsula that extends into the Persian Gulf from the east side of the Arabian Peninsula. Saudi Arabia is to the west and the United Arab Emirates to the south. The country is mainly barren.

Qatar was once controlled by the sheikhs of Bahrain, but in 1867, war broke out between the people and their absentee rulers. To keep the peace in the Persian Gulf, the British installed Muhammad ibn Thani al-Thani, head of a leading Qatari family, as the region's ruler. In 1893, the Ottoman Turks made incursions into Qatar, but the emir successfully deflected them. In 1916, the emir agreed to allow Qatar to become a British protectorate.

Oil was discovered in the 1940s, bringing wealth to the country in the 1950s and 1960s. About 85% of Qatar's income from exports comes from oil. Its people have one of the highest per capita incomes in the world. In 1971, Qatar was to join the other emirates of the Trucial Coast to become part of the United Arab Emirates. But both Qatar and Bahrain decided against the merger and instead formed independent nations.

Qatar permitted the international forces to use Qatar as a base during the 1991 Persian Gulf War. A border dispute erupted with Saudi Arabia that was settled in Dec. 1992. A territorial dispute with Bahrain over the Hawar Islands remains unresolved, however. In 1994, Qatar signed a defense pact with the U.S., becoming the third Gulf state to do so.

Qatar has the largest Sports Dome in the world! It is also the most technologically advanced. (It can be found at Aspire Academy in Doha)

Many women in the Gulf, say they prefer Qatari men. They are considered to be gentle, romantic, well dressed, and completely giving.

Qatar's goal is to be the central transit point for Asia.

Qatari men's head-dress (Ghitra) is usually white and have two black tassles. (These are nicknamed tea-bags). The way that the Qatari style of wearing the Ghitra is also known as 'The Cobra'.

Qatar used to share it's currency with Dubai. Yes, it was called the Qatar and Dubai Riyal.

It is NOT true that you must cover your body up in Qatar. You can wear a bikini at the pool or beach, you can wear short shorts, and you are free to show of your fashion.

Qatar is the first country in the Gulf to fine Pedestrians for not walking correctly on the pavement. Those who put their lives at risk are fined QR200.

Qatar has the world's largest Gas Reserves. It is the main reason why Qatar is developing into such a modern nation.

Qatar is one of the safest countries in the world! It's true, it's safer than Japan for example.

Qatar's flag used to be red! The story goes that a manufacturer was supposed to create a batch of flags. However an experimental red dye was used. When the flags were all put up, they turned a Maroon colour. The country decided to adopt it. This shade of Maroon is now known as Qatar Red.

Doha is the capital of Qatar.

Qatar is the first country in the Middle East region to support Digital Television! Yes you can watch DVB-H signals on your mobile phone.

In June 2013, the Taliban opened an office in Doha, Qatar, and its representatives held a press conference with an international media contingent. The U.S. said it would begin long-delayed peace talks with the group. Afghanistan was expected to do the same, but instead said it would not engage in any dialogue with the Taliban, saying such discussions lent the militants credibility.

In June 1995, Crown Prince Hamad bin Khalifa al-Thani deposed his father, primarily because the king was out of step with the country's economic reforms. The emir was not stripped of his title, and much of the power was already in his son's hands. The new emir lifted press censorship and instituted other liberal reforms, including democratic elections and women's suffrage (1999). In 2003 Crown Prince Jassim, who declared he had never wanted to be king, abdicated in favor of his younger brother, Prince Tamim.

Qatar is the home of Al Jazeera, the immensely popular and controversial Arabic satellite television network.

Qatar introduced its first constitution on June 9, 2005. It guarantees freedom of expression, assembly, and religion and calls for a 45-seat parliament. Thirty of the seats will be filled in democratic elections; the emir will appoint the remaining seats.