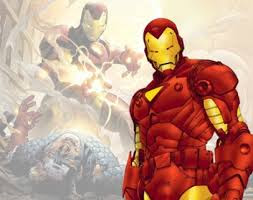 Iron Man possess no super powers other than the weapons his Iron armor provides.

In the Superior Iron Man comic book series, Stark is actually a villain, akin to a pharmaceutical fat cat.

Lee modeled Stark on famed businessman Howard Hughes, with all of the real-world industrialist's playboy habits, but without the mental instability that characterized Hughes' later life.

Stark was one of the first Marvel superheroes to develop a relatively large following among female readers. According to Lee, an overwhelming majority of the fan mail Marvel received from female readers for many years was directed at Tony Stark.

In the Iron Man films, J.A.R.V.I.S is Tony Stark’s AI system, but in the comics he’s an actual human being whose full name is Edwin Jarvis.

Iron Man appeared on a few episodes of the Fantastic Four cartoon.

Iron Man guest starred a few times once to help Spidey vs Venom and on the last few Secret Wars episodes.

Stark was ranked the fifth wealthiest fictional character of all time by Forbes in the most recent edition of the publication's annual “Fictional 15” list.

Stark entered MIT at the age of 15 and graduated two years later with a Master’s degree in chemical engineering.

During the modern era of Iron Man adventures, Stark was appointed Secretary of Defense by the U.S. President, and spent more than a year in that role before resigning. He initially agreed to take the position in order to monitor how Stark Technology was being used by the nation's military.

Stark has held a lot of titles in his lifetime, one of which was Director of S.H.I.E.L.D, which he took over after then Director Maria Hill suggested he take the job during the Civil War storyline.

Stark initially changed the color of his armor from metallic gray to gold (and later to red and gold) on the advice of a former girlfriend, who said the color would make him less frightening to the people he's trying to help.

Stark was once appointed Secretary of Defense for the United States of America by the president, mainly out of necessity. The government was trying to recreate Stark’s tech and suits, but they were terrible at it and nearly blew up Washington. They decided to bring Stark in to lend a hand and oversee the operation.

According to his fictional biography, Stark was admitted to the Massachusetts Institute of Technology at age 15, and graduated only two years later with Master's degrees in physics and engineering.

Iron Man debuted in issue #39 of Tales of Suspense in 1963 (Robert Downey Jr. was born two years later, in 1965). The superhero would go on to receive his first standalone issue in 1968.