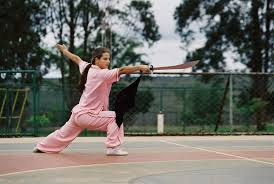 Wushu dates back to primitive society where people used clubs and other primitive tools to fight wild animals. In the Spring and Autumn and the Warring States periods (770- 221 BC), wushu became more combative in nature as more weapons came into use. It also attracted more attention with its beneficial effects on health.

The International Wushu Federation aims to further inform today’s world about wushu and established a number of suborganizations in every part of the world. In fact, when they established their South East Asia Wushu federation in 1994, Mr. Benito Lim of the Philippines became their first president.

Wushu contests and performances were popular in the Qin and Han dynasties (221 BC-AD 220). The sword dances performed by Xiang Bo and Xiang Zhuang at “A Banquet at Hongmen Gate” as described by Sima Oian in his Historical Records were actually a show of attack and defence in swordplay.

Traditional Wushu was used in Ancient China for self-defense and hunting needs of the people. In 1949, modern China aimed to nationalize the use of their traditional martial arts giving birth to the modern wushu that is both a full-combat sport and performance.

Wushu, with its mysterious Oriental flavor, is regarded as the quintessence of physical culture. Often referred to as “arts of fighting with eighteen kinds of weapons,” it is distinguished by three salient features: usefulness for combat, benefits to health, and fascinating movements.