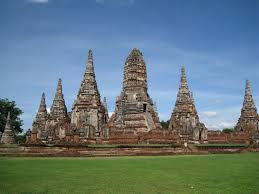 Thailand’s name in the Thai language is Prathet Thai, which means “Land of the Free.” It is the only country in Southeast Asia that was never colonized by a European nation.

Thailand has had several names over the centuries. For hundreds of years it was known by the names of its dominant cities, such as Sukhothai, Ayutthaya, and Thonburi. Since the 1800s, it has repeatedly switched back and forth between Siam (Sanskrit meaning dark or brown) and Thailand.

In the past, all Thai young men including the kings became Buddhist monks for at least a short period of time before their 20th birthday. Today, fewer young men observe the practice.

The world’s smallest mammal, the Craseonycteris thonglongyai (the bumble bat), is found in Thailand.

Medicine man Hoo Sateow from Thailand has the world’s documented longest hair at 16' 11" long. He says his hair “keeps him nice and warm.”

In 1996, two rare “diamond-eyed cats,” Phet and Ploy, were married in a lavish $16,241 Thai wedding, the most expensive pet wedding in the world.

In 1999, 30 vets worked to heal a 38-year-old cow elephants’ foot, which had been destroyed when she stepped on a landmine in Thailand. It set the record for the largest number of vets in one procedure.

In 1999, a group of 282 skydivers set the record for the largest number of skydivers in a free-fall formation above Ubon Ratchathani, Thailand. They held the link for 7.11 seconds.

Thailand is the world’s 51st largest country. Russia is the largest. The United States is third largest.

Seventy five percent of the people in Thailand are Thai, 14% are Chinese, and 11% are “other.”

Buddhism is Thailand’s largest religion with approximately 94.6% of the population practicing the religion. Muslims make up 4.6%, Christians 0.7%, and “other” 0.1%.

Thailand set the record for the longest catwalk on April 9, 2010. The catwalk was 1,584 meters long and was part of the Pattaya International Fashion Week.

The highest elevation in Thailand is Doi Inthanon at 8,514 feet (2,595 m). It is also a popular tourist destination. In fact, an estimated 12,000 people visit the summit each New Year’s Day. The lowest elevation is sea level along the coast.

The longest place name in the world is the full name of Bangkok, the capital city of Thailand: Krungthepmahanakhon Amonrattanakosin Mahintharayutthaya Mahadilokphop Noppharatratchathaniburirom Udomratchaniwetmahasathan Amonphimanawatansathit Sakkathattiyawitsanukamprasit. It means “City of Angels, Great City of Immortals, Magnificent City of the Nine Gems, Seat of the King, City of Royal Palaces, Home of Gods Incarnate, Erected by Visvakarman at Indra’s Behest.”

A century ago, northern Thailand was covered with dense hardwood forests. Today only about ¼ of the country remains wooded. Thailand has the second-highest rate of forest loss in Southeast Asia. Only Singapore has lost more. Today, logging is banned in Thailand.

A nuclear family in Thailand is rare because most people live in large extended families.

Thailand’s national language is called Thai, which many scholars believe is a form of Chinese that was gradually brought to the area between the 7th and 13th centuries. Like Lao, Vietnamese, and Chinese, Thai is a very tonal language. Its alphabet has 32 vowels and 44 consonants.

Bangkok was once called the “Venice of the East” because its original buildings stood on stilts above the Chao Phraya River. However, as Bangkok grew larger, most canals were filled and paved.

Traffic police in Bangkok wear facemasks because of dangerous levels of air pollution. Additionally, police stations are equipped with oxygen tanks in case exhaust fumes overwhelm the officers. More than 20% of Bangkok’s police have some form of lung disease. One Thai bank estimated that Bangkok’s pollution woes cost the nation $2.3 billion annually in lost production, wasted energy, and health costs.

The 2004 tsunami hurtled a wall of water 30 feet high over Thailand’s coast, killing over 8,000 people. An estimated 1,500 Thai children lost their parents and more than 150,000 Thais working in the fishing or tourist industries lost their livelihoods.

One-tenth of all animal species on Earth live in Thailand.

Prostitution is technically illegal in Thailand, but the law is very rarely enforced. Estimates of the number of sex workers vary from 30,000 to more than 1 million.

More than 1,500 species of orchids grow wild in Thai forests. Thailand is the world’s number one orchid exporter.

Siamese cats are native to Thailand. In Thai they are called wichen-maat, meaning “moon diamond.” A 14th-century book of Thai poems describes 23 types of Siamese cats; today only six breeds are left. Giving a pair of Si Sawat cats (a type of Siamese cats) to a bride is supposed to bring good luck to the marriage.

Thailand is home to what may be the world’s longest snake, the reticulated python. The largest one ever found stretched over 33 feet (10 m) from end to end.

Thailand is home to the world’s longest poisonous snake, the king cobra. The cobra can reach more than 18 feet long, and one bite from it can kill an elephant.

The largest living lizard is native to Thailand. The monitor lizard can grow as long as 7 feet.

Approximately 10% of the world’s bird species live in Thailand, a greater proportion than in all of Europe or North America.

Swiftlet nests are made from strands of saliva from the male swiftlet bird. Swiftlet nests collected from Thai caves can fetch more than $900 per pound. It is one of the world’s most coveted and expensive food items.

The Mekong River, which forms part of Thailand’s eastern border, supports more than 1,300 species of fish. It holds some of the world’s largest freshwater fish, including a giant catfish which can reach nearly 10 feet long and weigh as much as 660 lbs.

One of Thailand’s most curious creatures is the mudskipper, which is a fish that is capable of walking on land and climbing trees. It uses its fins to “walk” and can absorb oxygen through its skin and lining in its mouth. It spends most of its time out of the water, eating the algae in tidal pools.

Both the Hollywood movie and Broadway play of The King and I are banned in Thailand. Based on the Siamese ruler King Mongkut and a teacher named Anna Leonowens, the movie is seen as insulting to the king. While the movie depicts him as uncultured, he is believed to be the first Asian ruler to speak, read, and write English fluently. He also is considered highly intelligent, cultured, and well read. Further, he is known as the father of Thai scientists.

Thailand’s and the world’s longest reigning monarch is Bhumibol Adulyadej, who became King Rama IX in June 1946. He was born in the U.S. in 1927 when his father was studying medicine at Harvard. He owns a patent on a form of cloud seeding and holds a degree in engineering from Switzerland. He also plays the sax and composed Thailand’s national anthem.

Over 300,000 Thai have settled in North America with the largest communities along the West Coast in cities such as Los Angeles, San Francisco, and Vancouver. Today, over 10,000 Americans live in Thailand.

World-famous golfer Tiger Woods is the son of an American father and a Thai mother.

Just as the bald eagle is a symbol of the U.S., the Garuda (a creature from the Hindu religion) is a national and royal symbol of Thailand.