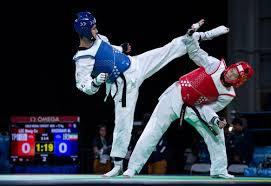 Taekwondo is a Korean martial art and the national sport of South Korea. It is the world's most popular martial art in terms of number of practitioners. Gyeorugi, or sparring, is an official Olympic sporting event.

In Korean, tae means "foot"; kwon means "fist"; and do means "way" or "martial art"; so Taekwondo is loosely translated as "the way of the foot and fist"

It combines combat techniques, self-defense, sport, exercise, meditation and philosophy. Taekwondo is also used by the South Korean military as part of its training.

Taekwondo training generally includes a system of blocks, kicks, punches, and open-handed strikes and may also include various take-downs or sweeps, throws, and joint locks.

Two of the most popular systems of taekwondo are named solely after their respective organizations, the International Tae Kwon Do Federation (ITF) and the WTF (Kukkiwon). The ITF was founded in 1966. Taekwondo Federation is located at the Taekwondo Palace in Pyongyang, North Korea and was founded in the mid-1990s.

The Korea Taekwondo Association Central Dojang was opened in South Korea in 1972. A few months later, the name was changed to the Kukkiwon.

The International Olympic Committee recognized the WTF and taekwondo sparring in 1980.

The senior section is typically made up of nine ranks. These ranks are called dan, also referred to as "black belts" or "degrees" (as in "third dan" or "third-degree black belt"). Black belts begin at first degree and advance to second, third, and so on.

Currently, Taekwondo is practiced in 188 countries with over 70 million practitioners and 4 million individuals with black belts throughout the world. It is now one of only two Asian martial arts that are included in the Olympic Games; it became a demonstration event starting with the 1988 games in Seoul, and became an official medal event starting with the 2000 games in Sydney.

Taekwondo is known for its emphasis on kicking techniques, which distinguishes it from martial arts such as karate or southern styles of kung fu. The rationale is that the leg is longest and strongest weapon a martial artist has, and kicks thus have the greatest potential to execute powerful strikes without successful retaliation. One defining kick Taekwondo is the back kick or the side kick.

Taekwondo as a sport and exercise is popular with people of both genders and of many ages. Physically, Taekwondo develops strength, speed, balance, flexibility, and stamina. An example of the union of mental and physical discipline is the breaking of boards, which requires both physical mastery of the technique and the concentration to focus one's strength.