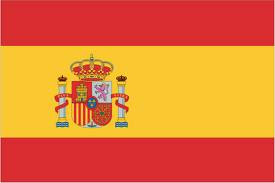 The Spanish name for Spain is España.

The Spanish language is spoken in many areas of the world due to the early influence of the Spanish Empire.

Spain is located in Europe.

It is a developed country with a high quality of life.

The largest city and capital of Spain is Madrid.

The second largest city is Barcelona, which is located in Catalonia.

The population of Spain in 2012 was around 47 million.

The currency used in Spain is the Euro.

In Spain they drive on the right-hand side of the road.

he name Spain diverged from the word Ispania, which means the land of rabbits.

There is no tooth fairy in Spain but rather a tooth mouse called Ratoncito Perez.

They have highest number of bars out of all the countries in the EU.

Christopher Columbus (the famous explorer) is Spanish, but they have no idea where he was buried.

Spaniards are famous for their contributes to art, with famous Spanish artists including Dali, Picasso, gaudi, el Greco, and Goya.

Spain was not part of the first or second world war.

Spain is the country closest to Africa.

Over 98% of the population used to be roman catholic… presently it is around 76%.

Juan Mica claims that his family were the first to invent the drink, called Nuez de Kola Coca’, which he then took to the US and sold the recipe.

The tennis player Rafael Nadal first picked up a racket at the age of 3.

Nadal originally showed promise as a soccer player but gave it up at 12 to focus on tennis.

Javier Bardem was the first Spanish actor to win an Oscar.

Penelope Cruz was the first Spanish actor to win an Oscar for best supporting actress for Vicky Cristina Barcelona.

Cruz and Bardem got married in 2010 and have a son named Leo.

Many of the paintings by the Catalan artist augsti pugi appeared in Vicky Cristina Barcelona.

Enrique Iglesias is half Filipino, half Spanish.

Enrique’s favorite movie is Raiders of the Lost Ark.

Antonio Banderas was a soccer player until he broke his foot at the age of 14 and instead became a famous movie star.

Nadal is messy at home, and when he was a teenager in Majorca, his mother used to complain about his room.

Nadal is naturally right-handed, except when it comes to playing tennis, which he does left-handed.

Nadal’s favorite movies are Titanic and The Gladiator.

Spanish is the second most spoken language in the world.

There are 329 million native Spanish speakers in the world.

Spanish is spoken in 44 countries (with at least 3 million native speakers in each).

After Latin, the language that has the largest influence in Spanish is Arabic.

Spanish is expected to be the first language of 50% of the population of the United States within 50 years.

Spanish is the most popular foreign language to learn in America and Europe.

There are two types of Spanish – European Spanish and Latin American Spanish.

There are more native Spanish speakers than English.
The Spanish language began on the Iberian Peninsula, consisting of Spain, Portugal, Andorra and Gibraltar.

Every hour of every day over three thousand pedestrians stroll through Fontanella-Portal del Àngel.

Spain is the only country in Europe that produces bananas.

Spain is the only country that has the sports bull fighting counted as a sport.

Nearly 75% of the world’s saffron flower is grown in Spain.

Tomatoes, potatoes, avocadoes, tobacco, and cacao, were all brought to Europe (then spread around the world) by the Spaniards from their American colonies.

50. Spain was one of the first European countries to ban smoking in workplaces and bars (2006).

On May 15th all the single women in Madrid visit the chapel called Ermita de San Isidro to prick their fingers with pins and put it in a vessel, in order to find a husband.

Same sex marriage has been legal in Spain since 2005.

90% of prostitutes in Spain are illegal immigrants.

Teenagers in Spain normally start dating in groups when they’re 14.

The divorce rate in Spain is 17% (relatively low compared to over 50% in the USA).

In Barcelona, on St George’s Day (23 April) it was custom to exchange a book and a rose with the person they loved.

Fans of FC Barcelona are known as culés, the Catalan word for ‘ass’.

The two most successful Spanish football teams, FC Barcelona and Real Madrid are also fierce competitors.
The rivalry stems from Franco’s dictatorship; Barcelona represented an opposition to Franco while Real Madrid was a symbol of nationalism and was favored by the regime and Franco.

FC Barcelona is the biggest privately owned stadium in the world (seating 100,000 people).

The 1992 summer Olympics were held in Barcelona.

Soccer is the most important sport. It’s also pretty much like a religion.

Real Madrid is the most popular club in the world with over 228 million supporters.

Real Madrid is also the richest club in the world.

The name Madrid comes from the arabic “magerit” which means ‘place of many streams’.

Madrid enjoys more cloudless days than almost any other city in Europe.

In Ibiza, tourists spend about 1430 million euros each year.

One in every five citizens registered in Ibiza lives in an isolated house in the country.

It is believed that modern humans first arrived in Spain around 32000 years ago.

The Pyrenees is a mountain range that divides Spain and France.

Spain includes a number of islands including Mallorca, Tenerife, Ibiza and Gran Canaria. Many can be found in the Canary Islands, an archipelago off the northwest coast of Africa.

The Spanish tourism industry is one of the largest in the world, bringing in billions of Euros into the Spanish economy.

Spain has a variety of foods and unique dishes such as paella (a type of rice dish) and tapas (a range of small snacks or appetizers).

Football (soccer) is the most popular sport in Spain.

The 1992 Summer Olympic Games were held in Barcelona.

For more information, check out maps of Spain or take a closer look at the Spanish flag.