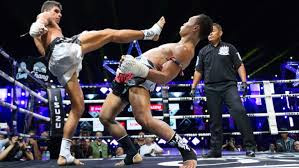 Muay thai is referred to as the “Art of Eight Limbs” or the “Science of Eight Limbs” because it makes use of punches, kicks, elbows and knee strikes, thus using eight “points of contact”, as opposed to “two points” (fists) in boxing and “four points” (hands and feet) used in other more regulated combat sports, such as kickboxing and savate.

In this form of martial art it is trained to be aware of the weak and the fatal points of the opponent’s body. A fighter can easily defeat the other in less time if he has good knowledge of his weak positions.

One common Muay Thai technique is called the clinch. It is performed by grabbing an opponent around his body or neck. You may have seen this before when you've watched a boxing match on TV. When it happens in boxing, however, the two opponents are often forced to separate.

Muay thai is a means of physical exercise, self-defense, recreation, and personal advancement.

Another key element of Muay Thai is blocking. Blocking is not easy, and it requires that Muay Thai practitioners be the best physical and mental condition. One block utilizes the shin to block roundhouse strikes from the opponent on the mid and lower body.

In the earliest years the only things they Thai people had to rely upon for protection during battle were rudimentary clubs and short-range spears. This led to fighting at extremely close ranges which necessitated the use of fighting methods that incorporate the use of the feet, hands, fists, elbows, and even the head as combative weapons.

Thailand’s first boxing ring was built in 1921 at Suan Kularp.

Time simplest Muay Thai techniques involve using the body's parts as weapons—the knees, shins, fists, elbows, and feet are all very effective striking weapons. When it comes to self defense, a fighter will often switch to grappling moves.

Muay Thai has grown so much that there is now a world championship tournament held each year. As the sport gains acceptance in new countries, men, women, and children alike are learning the martial arts techniques of Muay Thai.