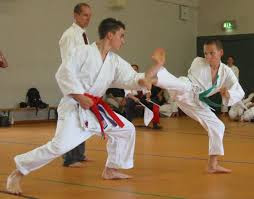 The place where Karate training is carried out is called the “dojo”. This translates to “the place of the way”.

The traditional white uniform you wear in the dojo is called a “gi”, simply meaning “uniform” in Japanese.

The loud yell made during explosive techniques is called a “kiai” (key-i). This is Japanese for “unification of will”.

The kiai serves two purposes, to empty the body of excess wind incase you are hit in the stomach by a counter attack and to focus all positive energy (“chi”) on the technique.

Contrary to popular opinion, the martial art Karate was not invented in China. Rather, it has its origins in the island of Okinawa in Japan. The word "Karate" means the "empty hand" or the "Chinese hand", and it has been given this name because it involves a rapid use of hands and legs in an extreme close combat.

It was sometime in the sixteenth century that Chinese Kung Fu fighters experimented around with their styles and formulated the "te" technique ("Te" means hand). The art grew in China and evolved from a very rough and simple fighting style into a hard, close-combat style.

Around the late nineteenth century, Gichin Funakoshi, a famous martial arts practitioner from Japan, blended new moves into the "Te" style and displayed his art to the Japanese martial arts masters in early twentieth century. This was the beginning of Karate, as we know it.

Karate kicked off with the original Okinawa style; later on, the Japanese patented their own styles, which are now appropriately called Japanese styles of Karate. With time, many karate schools all cross the world began naming their Karate after their school's or master's name, giving birth to many sub-styles.

As you know, Karate is a fast-paced martial art that involves electric movements of the hands and legs. So, you need to ensure that you are attired in a comfortable Karate uniform.

As Karate involves close combat and can be lethal, you will also need to protect your head and groin by strapping on a head guard and groin protector, respectively. Arm, chest and leg guards are available too, and so are karate mitts and shin protectors. And, of course, mouth guards can be considered too, just in case.

And, finally, before you go out there to practice Karate, do not forget to plug in a first aid kit in your bag.

Karate not only keeps your body fit, it also strengthens your mind and enhances your concentration. Only thing, you must learn to respect it and practice it seriously as an art.

Karate is one of the most popular martial arts practiced today.

Karate is for just about everyone, for all ages and both sexes and is a great physical workout, no matter what age or physical condition you
are in when you start.

Karate is a way to a better life, not just a method of fighting.

Karate is great for the mind (concentration) and the spirit (emotional stability).

As recently as a hundred years ago, it was common practice for karatekas to intentionally break one or both of their middle fingers early on in their karate training. This increased the size of the middle knuckle, making it a more effective punching weapon.