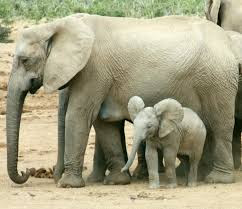 Elephants are extremely intelligent animals and have memories that span many years. It is this memory that serves matriarchs well during dry seasons when they need to guide their herds, sometimes for tens of miles, to watering holes that they remember from the past. They also display signs of grief, joy, anger and play.

Elephants can live in nearly any habitat that has adequate quantities of food and water. Their ideal habitat consists of plentiful grass and browse.

Elephants are the largest land-living mammal in the world.

Despite the size of ears the elephant’s hearing is poor.

Female elephants are called cows. They start to have calves when they are about 12 years old and they are pregnant for 22 months.

The name of an adult male is referred to as a bull.

The name of an adult female is referred to as a cow.

The name or offspring, or a baby Elephant, is a calf.

The average size of a litter is just one elephant.

The collective name for a group of Elephants is a herd.

The sounds made by an adult Elephant are referred to as grunts, purrs, bellows, whistles and trumpeting.

An elephant can use its tusks to dig for ground water. An adult elephant needs to drink around 210 litres of water a day.

Elephants have large, thin ears. Their ears are made up of a complex network of blood vessels which with regulating an elephants temperature. Blood is circulated through their ears to cool them down in hot climates.

Elephants have no natural predators. However, lions will sometimes prey on young or weak elephants in the wild. The main risk to elephants is from humans through poaching and changes to their habitat.

The elephant’s trunk is able to sense the size, shape and temperature of an object. An elephant uses its trunk to lift food and suck up water then pour it into its mouth.

Elephants can swim – they use their trunk to breathe like a snorkel in deep water.

Elephants are herbivores and can spend up to 16 hours days collecting leaves, twigs, bamboo and roots.

The elephant is distinguished by its high level of intelligence, interesting behavior, methods of communication and complex social structure.

Elephants seem to be fascinated with the tusks and bones of dead elephants, fondling and examining them. The myth that they carry them to secret "elephant burial grounds," however, has no factual base.

Elephants are very social, frequently touching and caressing one another and entwining their trunks.

Elephants demonstrate concern for members of their families they take care of weak or injured members and appear to grieve over a dead companion.