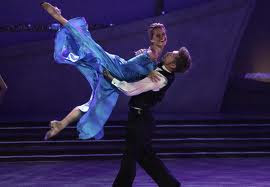 When the Waltz was first introduced into the ballrooms of the world in the early years of the Nineteenth Century, it was met with outraged indignation, for it was the first dance where the couple danced in a modified Closed Position - with the man's hand around the waist of the lady.

Waltz is a ballroom dance.

Beginning about 1830, the waltz was given a tremendous boost by two Austrian composers Lanner and Strauss. They set the standard for the Viennese Waltz, a very fast version played at about 55 - 60 measures per minute. The fast tempo did indeed present problems. Much of the enjoyment of the new dance was lost in the continual strain to keep up with the music.

It started in the 16th century but became popular in the 18th.

It is not known exactly when the waltz was introduced to the United States. It was probably brought to New York and Philadelphia at about the same time, and by the middle of the Nineteenth Century was firmly established in United States society.

It is a graceful, smooth dance.

Today both the faster Viennese Waltz, made forever popular by the Strauss family, and the slower American and International style waltzes are extremely popular today with dancers of all ages.

It started in Germany.