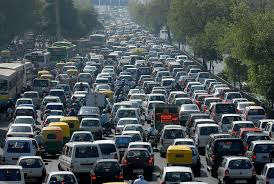 n 2003 there were more than 6.3 million motor vehicle crashes reported to police. Of those, 38,252 crashes resulted in fatalities.

In 2003, 15,251 people were killed in alcohol-related car accidents, representing 40 percent of all motor vehicle fatalities for that year.

In 2001, crashes were the leading cause of death for people ages 4-33 in the United States.

America's families spend more than 19 cents out of every dollar earned on transportation, an expense second only to housing, and greater than food and health care combined.

The individual cost of congestion exceeded $900 per driver in 1997, resulting in more than $72 billion in lost wages and wasted fuel.

Drivers seated higher think they are driving more slowly than drivers seated lower, and so tend to speed more often.

Anywhere from 10% to more than 70% of people in urban traffic are simply looking for parking.

People who live on streets with more traffic spend less time outside and have fewer friends.

Saturday at 1 p.m. has heavier traffic than weekday rush hours.

Highways can handle more cars at 55 mph than 80 mph.

When roads are closed for construction, traffic on other nearby roads often decreases rather than increases.

SUVs can reduce the capacity of signalized intersections by up to 20%.

It takes longer for people who circle looking for the “best” parking spot in lots to get to their destination than those who pick the first spot they see.

People are willing to spend longer walking to and from a parking spot in parking lots than on city streets.

A driver driving at 30 mph sees an average of 1320 pieces of information every minute.

After thirty seconds of waiting, most people will begin to cross against the light. People are more likely to jaywalk when well-dressed people do it first.

350 people die every year entering the freeway the wrong way; at least 50 are killed by cars in driveways.

One in five urban crashes is related to searching for parking.

New cars crash at a higher rate than older cars.

The fatality risk in the backseat of a car is 26% lower than in the front.

Parents on the “school run” increase local traffic by a third. Only about 15% of U.S. schoolchildren walk to school.

If everyone waits to merge at the point where a highway loses a lane, rather than earlier, traffic flows better.

U.S. statistics show that half of all fatalities happen at impact speeds of less than 35 mph.

The average driver looks away from the road for .06 seconds every 3.4 seconds; drivers search for something in the car 10.8 times per hour.

Pedestrians think drivers can see them up to twice as far away as they actually can.

The most commonly dropped objects on Los Angeles freeways are ladders.

The more Stop signs a road has, the more likely drivers are to violate them.

In the U.S., fuel taxes would have to be raised from 20 to 70 cents a gallon for drivers to fully pay for the cost of roads (unlike in Europe, where drivers pay more than roads cost).

Car drivers drive closer to helmeted cyclists (and farther from cyclists who who appear to be women).

85 percent of all transportation costs in the United States are related to private automobiles.

Congestion results in 5.7 billion person-hours of delay annually in the United States.

Drivers in one-third of U.S. cities spend more than 40 hours a year (an entire work week) in traffic that is not moving.