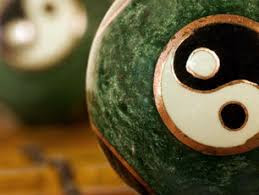 Tao is all about the natural order of things. In other words, it is an influence that reaches into every living and still object, and crosses the entire universe.

The main religious characters in Taoism are Lao Tzsu and Chuang Tzu, these are scholars who dedicated their lives to the balance of their inner spirits.

The most common symbol of Taoism is the circular, quite often in black and white, Yin Yang figure.

If the Tao is in balance it is possible to find perfect happiness.

Lao Tzsu said that you cannot interpret the Tao, it just is.

Since earliest times, Chinese thought has been characterized by an awareness of man's close relationship with nature and the universe, a cyclical view of time and the universe, veneration or worship of ancestors, the idea of Heaven, and belief in the divinity of the sovereign.

Both Confucianism and Taoism operate within this worldview and incorporate many of its concepts. These two organized belief systems are best viewed as complementary rather than competitive. While Confucianism concerns itself with the social and moral side of life, Taoism focuses on the individual, spiritual life.

Taoism is all about working with nature and nature's forces, and not fighting against them.

Taoism teaches the technique of mastering circumstances, not trying to control them, this is often called the path of wu-wei.One of the most famous examples is that of the bending reed in the wind to show clearly what is meant.

According to Taoist teachers, one should not fight against the problems one encounters but work with them to help you.

People use this symbol to think about and reflect on their lives.

Another interesting point about Taoism is, reality consists of constant change, in fact change is the only aspect that one is sure of.

Another element of Taoism is that of the uncarved block, one who is likened to an uncarved block does not stereotype or have other types of preconceptions about the world, he/she is a blank, and views the world with a sense of wonder which is always present.

Tao is all about listening and understanding, reflecting on the world and trying to understand it. One has to listen intently in order to reach a state of enlightenment.
Share This