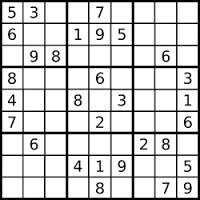 Speaking of the name Sudoku, did you know that the Japanese don't call it that? They call it by the name Sudoku's original creator gave it: Number Place.

Actually, Sudoku isn't a Japanese game it all. It's American invented. Howard Garns created it as Number Place in 1979 but died in 1989 before Japanese publisher Nikoli got a hold of it. The game didn't really take off until 2004 though, when Wayne Gould convinced The Times in London to publish it.

Sudoku caused a 700% increase in the sales of pencils!

Wayne Gould, New Zealander and retired Hong Kong judge, calls himself the stepfather of Sudoku. He stumbled upon a Sudoku book in Tokyo while vacationing there.

British Airways absolutely forbids its flight attendants from solving Sudoku puzzles during either takeoff or landing.

Will Shortz, The New York Times crossword editor, told Fortune in October 2005 that "the craze, judging by history, will last four, five, six months, and then it will taper off." He changed his mind by the May/June 2006 issue of Psychology Today and admitted that Sudoku had the staying power of crossword puzzles.

When Sudoku became a world hit in 2005, it is estimated that it is the biggest phenomenon since the Rubik's Cube in the 1980s.

Sudoku is a logic game and involves absolutely no math. Sometimes Sudoku puzzles even come with pictures, letters or symbols instead of numbers.

No one knows exactly how many Sudoku players there are around the world due to the various ways to play, such as online or in the paper.

The First World Sudoku Championship was held in Italy in 2006 and has been held annually since in different locations.
Playing Sudoku regularly can have benefits, like boosting your concentration and focus, preventing or easing depression and possibly even preventing dementia and Alzheimer's disease, according to some studies.

Sudoku is good for anyone and any age and helps develop mental abilities as well as keeps them in good condition.