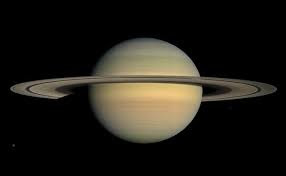 Many astronomers consider Saturn the most beautiful planet in the solar system because of its stunning rings. In fact, Saturn’s nickname is “the jewel of the solar system.”

Saturn is not the only planet with rings. Jupiter, Uranus, and Neptune also have rings, although they are much fainter and less spectacular than Saturn’s.

Saturn is the least dense planet in the solar system, and if there were a body of water large enough to hold Saturn, the planet would float. In contrast, Earth and Mercury would sink the fastest.

Nearly 1,600 Saturns could fit inside the Sun.

Winds in Saturn’s atmosphere travel up to 1,100 miles (1,800 km.) per hour, much faster than those on Jupiter. The strongest tornadoes on Earth have reached speeds of only about 300 miles (483 km.) per hour.

Storms on Saturn can last for months or even years. A long-lived 2004 storm on Saturn, named the “Dragon Storm,” created mega-lightning 1,000 times more powerful than lightning on Earth.

In early 2010, amateur astronomers spotted a massive ammonia blizzard raging on Saturn. The monster storm is five times larger than “Snowmageddon,” the snowstorm that shut down Washington D.C. in February 2010.

The Assyrians, who lived in modern-day Iraq, were the first to record sighting Saturn in 700 B.C. They called the planet the Star of Ninib, after the Assyrian sun god of spring.

As the seventh day of the week, Saturday is named after Saturn, the farthest of the seven objects in the solar system known in ancient times.

Saturn rotates so fast (6,200 miles per hour) that the planet bulges at its equator and its poles are flat. It is the flattest (oblate) planet in the solar system. In fact, Saturn rotates faster than any other planet except for Jupiter.

Discovered in 1789 by William Herschel, Saturn’s moon Enceladus (named after the mythological giant) has geysers that erupt icy particles, water vapor, and organic compounds. It is the shiniest object in the solar system because its icy surface reflects most of the light it receives.

The geysers on Enceladus not only feed the rings around Saturn but also may contain “ingredients for life.” Only two other outer solar system objects have known active eruptions: Neptune’s moon Triton and Jupiter’s moon Io, which are believed to erupt nitrogen and sulfur, respectively.

Saturn’s largest moon, Titan, is the only known moon to have a substantial atmosphere, which is 370 miles deep, 10 times thicker than Earth’s atmosphere. Conditions on Titan may resemble ancient Earth conditions, though at a much lower temperature.

Saturn’s moon Titan is the second-largest moon in the solar system. Only Jupiter’s moon Ganymede (named after one of Zeus’ lovers) is larger. Titan is even bigger than Mercury.

Though Saturn’s rings weren’t discovered until the 1600s, some scholars theorize ancient cultures may have known about them. For example, the Maori in New Zealand have historically referred to Saturn as Parearau, an ancient name that means “surrounded by a headband.”

More than any other planet in our solar system, Saturn’s weather is determined by conditions deep in the planet rather than by the Sun. This is partly because Saturn is so far away from the Sun and generates heat internally.

Because Saturn spins on a tilt, it has seasons. Summer on Saturn lasts about eight Earth years.

Saturn has no real surface. Gas merges gradually into a hot ocean of liquid hydrogen and helium. The planet’s core is a ball of rock, about the size of Earth.

Saturn gives off more than twice as much heat as it receives from the Sun. Scientists believe Saturn generates heat when helium sinks slowly through liquid hydrogen deep inside the planet. In fact, the temperature at Saturn’s core is estimated to be about 21,150° F (11,700° C), which is almost as hot as the surface of the Sun.

On April 14, 2010, NASA’s Cassini orbiter captured images of lightning on Saturn, which allowed scientists to create the first movie showing lightning flashes on another planet. Lightning is common on Saturn, though the bolts run only from cloud to cloud, unlike the cloud-to-ground lightning on Earth.

Saturn’s ring system is very wide, spreading out over a distance of 175,000 miles (282,000 km.). If you traveled that distance from Earth, you would be more than halfway to the moon.

Saturn’s rings are only a few hundred feet thick, which is less than half the length of a football field.b
Saturn’s rings are made from billions of chunks of rock and ice, ranging in size from a grain of sand to pieces as large as a house. They have a mysterious reddish “contaminant” that might be rust or the same organic material found in red vegetables on Earth.

Though it was once thought that they formed around the time of the dinosaurs, information gathered from the Cassini probe suggests that Saturn has had its rings throughout its history.

Only Jupiter has more moons (63) than Saturn (61), not counting Saturn’s hundreds of “moonlets.”

Because Saturn is so far from the Sun, the Sun would appear 10 times smaller viewed from Saturn than it does from Earth. On average, Earth receives 90 times more sunlight than Saturn.

Galileo Galilei was the first person to see Saturn through a telescope, in 1610. He thought the rings looked like “ears” and were “handles” or moons. In a secret anagram to his scientist friend Kepler, Galileo wrote he had discovered that the “highest planet” was “triple-bodied.”

The fifth-century B.C. text Surya Siddhanta approximated Saturn’s diameter at 73,580 miles. The calculation was only 1% off from the currently accepted estimate of 74,580 miles.

Scientists speculate that Saturn’s rings may disappear in 50 million years. Saturn’s gravititional pull will either suck the rings into the planet, or the rings will dissolve into space.

Saturn’s moon Titan is a very noisy place. The sound of the wind on Titan is intensified because Titan’s thick air conducts sound waves so well.