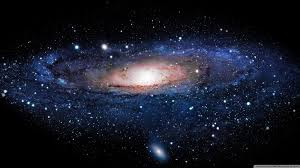 The largest spiral galaxy is believed to be the Malin-1 galaxy which has a spiral 10 times larger than the Milky Way galaxy.

Most astronomers suggest that galaxies formed shortly after a cosmic "big bang" that began the universe some 10 billion to 20 billion years ago. In the milliseconds following this explosion, clouds of gases began to coalesce, collapse, and compress under gravity to form the building blocks of galaxies.

Some of the largest galaxies in the universe are known to be elliptical galaxies with estimates that some are two million light years long and contain a trillion stars.

Irregular galaxies are neither spiral nor elliptical in shape. These galaxies will have more random shapes often because of the gravitational pull from other nearby galaxies.

Lenticular galaxies are galaxies that have aspects of both elliptical and spiral galaxies. They have faint spiral arms and an elliptical halo of stars.

Galaxies can occur completely on their own or they can be found in groups, clusters or superclusters. Sometimes galaxies can merge together which can lead to rapid star formations.

It is thought that our own Milky Way galaxy may merge with the nearby Andromeda galaxy which is only 2 million light years away (not that far away in space terms).

Elliptical galaxies are shaped as their name suggests. They are generally round but stretch longer along one axis than along the other. They may be nearly circular or so elongated that they take on a cigarlike appearance.

Elliptical galaxies contain many older stars, up to one trillion, but little dust and other interstellar matter. Their stars orbit the galactic center, like those in the disks of spiral galaxies, but they do so in more random directions. Few new stars are known to form in elliptical galaxies.

Galaxies that are not spiral or elliptical are called irregular galaxies. Irregular galaxies appear misshapen and lack a distinct form, often because they are within the gravitational influence of other galaxies close by.

Our solar system is found in the Milky Way. The Milky Way completes a revolution every 250 million years.

The Milky Way is believed to have a mass of 1000 billion times that of the Sun.

The visible disk of the Milky Way is thought to be 100,000 light years in diameter.

We believe that the Milky Way galaxy is 12 billion years old.

Most galaxies that we have studied are understood to be billions of years old. One of the youngest that we have discovered is the 1 Zwicky 18 galaxy that we think is only 500 million years old.

The most common type of galaxies that we have found to date are dwarf elliptical galaxies.

The Hubble Space Telescope has been instrumental in us being able to study distant galaxies and understand about the different types of galaxies.