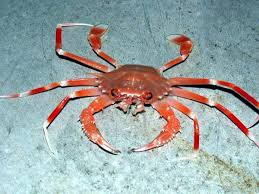 Hermit Crabs, King Crabs, Horseshoe Crabs and Porcelain Crabs are not true crabs at all. They do not follow the basic qualifying law of having ten appendages to be a crab.

There's also a Thumbnail Crab, which really looks like a human thumbnail.

The Fiddler Crabs immediately captivate anyone's attention because of their single large claw on one side. They can even raise this single claw in an action that resembles a person waving. Fiddler Crabs make for good household pets too.

The most colorful crab in the world is probably the Sally Lightfoot Crab. This crab has tantalizing colors or red, orange, yellow and white.

There's also a crab that's mistaken for a spider for its long spindly legs. This crab is the Arrow Crab. In fact, some people need to count the number of legs to understand whether this one is a crab or a spider (spiders have eight legs).

The crab's teeth are in their stomachs.

The biggest crab in Maryland was a male which measured 9 in.

Crabs actually have ten appendages (legs). Therefore they are known as decapods (deca = ten, poda = leg). Out of these, the first pair of appendages are modified into claws, which are biologically known as chelae.

Crabs are crustaceans. Crustaceans are creatures that do not have an endoskeleton like most animals have, but they have an exoskeleton. The exoskeleton of the crab is like a shield on its body, known as a carapace.

Crabs are also arthropods. The Phylum Arthropoda includes animals that have segmented appendages, among other features. Even insects like the cockroach, butterfly, housefly, mosquito, spider, etc. belong to this phylum.

The sizes of crabs can range from a small marble to that of several meters. The smallest known crab is the Pea Crab, named for its size; while the largest crab is the famous Japanese Spider Crab that has a walking leg span of as many as 3 to 4 m, and can go out to 8 m when outstretched.

If a crab loses its claw, the claw grows back.

Every year, 1.5 million tons of crabs are eaten over the world by humans.

Crabs make up for a fifth of all creatures that are caught from the water bodies of the world.

The species of crab that is consumed the most in the world is the Japanese Blue Crab or the Horse Crab. This crab is consumed to the extent of 300,000 tons a year. The crab is indigenous to the coast of China, but is found in other waters too.

People who specialize in catching crabs from the rivers, seas and oceans are known as crabbers.

Crabbers use a cage-like device to capture crabs. This is just like a cage with several places for the crabs to enter in, but no place to go out. The entrance is controlled by a one-way door.

Most crab meat is very high in vitamin B12 (cobalamin). It is said that just 2-3 ounces of the meat of a crab will provide you with the entire day's supply of the vitamin.

Crabs are cooked in a variety of ways. The gourmet method of cooking them with their shell is best suited to the variety of crabs known as Blue Crabs.